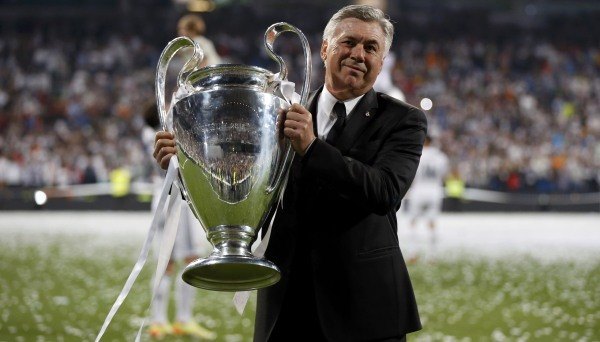 Highly-decorated Italian manager Carlo Ancelotti was sacked by Napoli on Tuesday just one hour after he had masterminded the club’s passage to the knockout stages of the Champions League – though the hugely respected and experienced coach isn’t expected to be out of work for long.

Napoli eased to a 4-0 win over Genk at the Stadio San Paolo in the final match of their unbeaten Group E campaign, ending a nine-match stretch in all competitions without victory in the process.

It seems however, that Napoli’s stale performances in the lead up to Wednesday’s result had provoked some important boardroom manoeuvrings behind the scenes at the Partenopei, and the club hierarchy wasted no time in announcing Ancelotti’s departure after their triumph over Genk.

Already, Ancelotti has been muted as the ideal candidate to fill two huge managerial vacancies at Premier League clubs, and with the Italian in high-demand, there is set to be a fascinating scramble for his signature.

Don’t forget – You can find all of our match previews and betting tips for this week’s action on our Premier League predictions page.

Arsenal are still without a manager having sacked Spaniard Unai Emery after the Spaniard oversaw the club’s longest run without a win since 1992 in his final flurry of matches in charge.

Fan favourite and club-legend Freddie Ljungberg has filled the void left by Emery on a temporary basis, though the Emirates’ hierarchy are reportedly hunting for a bigger name to take the reins permanently.

Carlo Ancelotti certainly falls into that category, and the fact that Arsenal are based in London could hand them a distinct geographical advantage over Everton in the race to snare the Italian.

Ancelotti spent two years in the English capital between 2009 and 2011 as manager of Chelsea, where he won the Premier League and FA Cup double in his first season before being fired by the notoriously impatient Roman Abramovich just a year later with the Blues in second place.

In terms of infrastructure and pulling power, Arsenal also have the edge over Everton at present, though the scale of the required rebuild at the Gunners could be a little off-putting for a manager who has spent approximately two seasons at each of his last five clubs.

Just a week ago, Everton finally brought Marco Silva’s uninspiring Goodison Park rein to an end, severing ties with the Portuguese manager who never really felt like a good fit for the club.

After just 18-months on the job and a semi-respectable 40% win rate, Silva was ousted from the Everton dugout following a run of poor form, with the nadir of his short-lived Toffees’ career coming in the 5-2 Merseyside Derby hammering that accelerated his departure.

Everton cult hero Duncan Ferguson’s enthusiasm injection allowed Everton to play with freedom and aggression in the club’s first game post-Silva against Chelsea, though the Toffees’ decision makers would be understandably reluctant to place the team’s future in the hands of such emotionally-charged inexperience.

Fresh reports this morning suggest that Everton have already put out initial feelers in Carlo Ancelotti’s direction, though the Italian might take some convincing to follow jobs at Paris St. Germain, Real Madrid, Bayern Munich and Napoli with a role at Goodison Park.

Ancelotti is also still behind David Moyes in the bookmakers’ list of favourites to take the hotseat at Everton, though the Toffees’ fanbase might prefer to see the Italian in charge over the man that quit the club to join Man Utd in 2013.