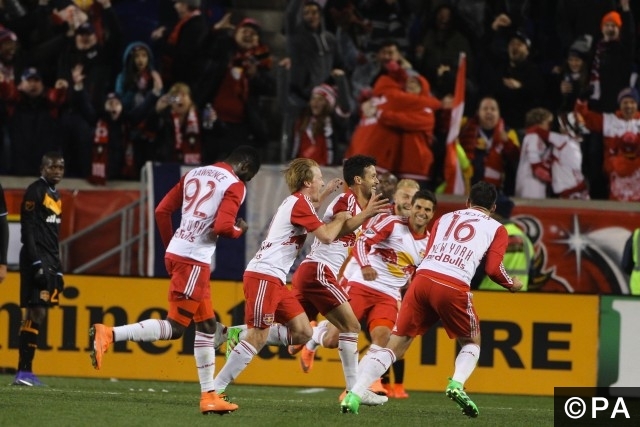 Another fantastic night for our overnight tipster. He managed to land his 6th standard acca this month, and 2nd Mega Odds Acca in 4 days – truly astonishing stuff! Reports for these winners are available here.

When the tips were released, this bet was valued at 65/1. It won at 10/1 as we had a remarkable 4 “void” legs, which turned our 9-fold into a 5-fold. The 4 legs to be void were Real Salt Lake +1 Asian Handicap, Alianza Lima Draw no Bet, Colorado Rapids Draw no Bet and SJ Earthquakes Draw no Bet.

The 1st 2 of the remaining 5 legs were Patriotas & Ind. Santa Fe – both teams were able to win their respective games in Colombia without conceding a goal, leaving us with just 3 more legs to go.

Next on the list, were the 1am kick offs in USA and Brazil. Montreal Impact beat LA Galaxy 3-2 which landed the Both Teams To Score leg from The States, and the 1-1 result in Brazil’s BTTS leg also landed! This meant there was one last leg to go if we were to win our bet.

We then needed to fly back to Colombia for the 2am kick off between Ind. Medellin and Millionairos, where just Millionairos stood in the way of us and the £100 potential returns. It was a slow 1st half but early into the second is when we saw the only goal of the game – thankfully to Medellin! They held out for the 1-0 victory and saw us over the line for our reduced Mega Odds Acca to land at a lovely 10/1!

This South American special started off with 3 of the 4 legs kicking off at Midnight. The last remaining leg kicked off at 2am.

The 1st of 3 earlier kick offs started slowly, but Independiente Sante Fe scored 3 minutes before half time. They then started the second half brightly with a 2nd goal in the 51st minute, which went on to seal the 2 goal victory at home to Once Caldas.

We then needed Junior to take something from their game away to La Equidad, meaning 1 point or 3 would do the job. It was a very boring game which ended 0-0, but that was more than enough to get leg 2 in the bag.

Final 12am game was Patriotas v Chico. The 1st half of this game was very subdued, with neither side really creating a whole load of opportunities. However, the 2nd half was a different story. Patriotas come out firing all cylinders and managed to grab the only goal of the game in the 66th minute through Daniel Rosero.

Last up was Independiente Medellin, we needed a win from the hosts as they took on a tricky outfit in Millionarios. The match was played at a slow pace first half with both teams not wanting to make a mistake. Second half Medellin put their foot down and stamped their authority on the game with an early second half goal. Acca landed, easy as that!

Congratulations to everyone who followed and sent in their slips to us via our Twitter page. Here are a few of our followers winning bet slips.

@FootySuperTips nice mini boom, the 9 fold landed as a nearly 10.00. Actually just in profit for the weekend now pic.twitter.com/lPFf7XKNU1

@FootySuperTips excellent start to the morning thank you very much pic.twitter.com/dQT2UgWcTI