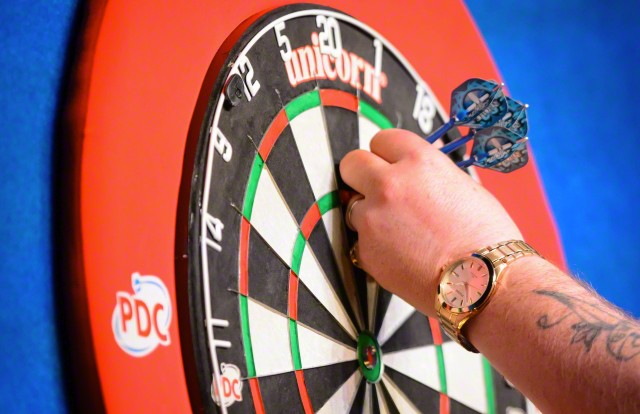 We’re back at the Ally Pally on Thursday as the PDC World Darts Championship rolls in to town! All eyes will be on the juggernaut that is Michael van Gerwen as he goes in search of his second world title and the way he’s playing this season has forced the bookies to slash his odds to 1/1, the shortest price ever in a major!

MVG is once again in superb form in 2015 cementing his reputation as the best player in the world by winning the (pause for breath) Masters, Players Championship, UK Open, European Championship, Grand Slam and Matchplay! His relentless scoring power and doubling is rivaled by no other but the most admirable part of his game comes to the fore when he’s seemingly ‘in trouble’. You can never write the man of such is his ability to reel off leg after leg, time after time! His record is also very strong having reached at least the semi’s in his last three appearances winning in once. That said the form the field has never been more competitive and there are a number of dangers, some obvious, some not so much.

Here we go through some of this year’s main threats:

We have to start with the reigning World Champion. Since winning his first world title the form of ‘The Flying Scotsman’ has been solid form but he’s not at the same level as when he won here at Alexandra Palace 12 months ago. His preparation has also been blighted in the last week or so after an interview which claimed he ‘intentionally’ threw a match against Adrian Lewis back in 2011. The quote seems to be misconstrued and although the allegation doesn’t worry me itself his form hasn’t quite been at the required level and his head might not be quite right after a turbulent week.
He’s the world champion for a reason and a Gary Anderson in form commands respect but at 7/1 it’s easy to look elsewhere this year.

What more can we say about the best player the game has ever produced? Despite not winning a major for over a year (Grand Prix 2014) ‘The Power’ is still one of the major forces in the PDC. The ability is clearly still there and his scoring power is as good as ever with him now finding the 60 bed much more consistently meaning less switching downstairs to treble 19. His biggest problem has been his doubling with his usually D16 and D8 hitting deserting him at the key times. Still, in the more favourable side of the draw Taylor will be popular among punters who can take up to 5/1 for him to lift his 17th world title.

‘Chizzy’ has improved beyond all recognition in the last couple of years and is now known as one of the biggest scorers in the game. When he’s hot his 180 hitting is the phenomenal and his doubling is right up there with the very best. The negative to his game is the snatch he develops when things aren’t quite going to plan and with the power scoring suffering as a result his head can drop a bit.
On his day he’s without question one of the best in the world on the oche and if he can keep his form together for a fortnight he could make the 35/1 currently available look like a silly price.
Of the rest…

He’s still somehow yet to make a world final. ‘The Machine’ has a gritty way of getting through difficult matches but his averages are often nowhere near that of the MVG’s of this world. He’s generally pretty consistent and at 25/1 he rates a fair chance, especially if there’s a shock elsewhere in his difficult draw.

Lewis will be a name on many people’s betslips. ‘Jackpot’ won back to back world titles in 2011 and 2012 and knows exactly what it takes to stay the distance over the festive period. More importantly for Aidy his form seems to have peaked just at the right time. The obvious downfalls to his game is his concentration levels, for a player with so much natural ability he should have won more than he has often roaring in to a good lead only for his mind to wander elsewhere and be pegged back. He’s a rhythm player with one of the most fluent actions you’ll ever see and 20/1 for a two-time world champion and a massive talent looks a pretty tasty price.

is another who has shown massive improvement in the last few years. Known for his flamboyant dress sense and beautiful hair styles ‘Snakebite’ is no mug on the board. He reached the final in 2014 only to be beaten by an inspired Michael van Gerwen who went on to win his first title. His self belief is unwavering and it’s no wonder given the form he’s been in this year. He’s frightened of nobody and has the tendancy to wind up opponents with antics on the oche which only works to his advantage. Could this be the year Wright lifts at title? At 28/1 there are certainly worse bets out there.

There are no prizes for touting MVG as the likely winner of this tournament, the bookies have made that clear pricing him up at such skinny odds. If you don’t have a Paddy Power I would definitely recommend signing up to get Michael van Gerwen at 7/1.

An interesting side bet to take you through the tournament is ‘Total number of 170 checkouts – over 2.5’ at 5/6. The line looks very low given the amount of games played and the quality of even the lowest ranked players and their ability to take out a three dart finish