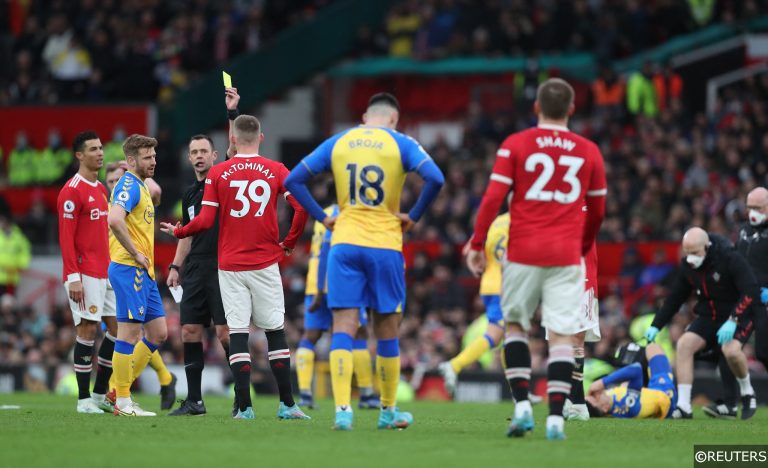 The Manchester derby is one of the most fiercely contested rivalries in the Premier League and with the two giants set to clash again on Sunday I’ve taken a look at the card markets for our new feature: Play Your Cards Right.

There have been 60 yellow cards and two red cards in the last 14 competitive Manchester derbies and one meeting in 2018 saw an incredible nine bookings dished out by Martin Atkinson.

We can expect a fiery-tempered affair on Sunday and we’ve picked out three potential troublemakers to back in the cards market, combining for a tasty 23/1 treble!

Luke Shaw has been a card magnet for Manchester United over the last few years and it’s no surprise to see him as one of the favourites to get in Michael Oliver’s bad books.

He has been booked nine times – three of them coming in his last four appearances – in the Premier League and Champions League this season, making it 42 yellow cards since the beginning of 2018/19.

Not only that, but Shaw has history in the derby. He’s been carded in two of his last three Manchester derbies and in four of the seven he’s played at left back. In fact, Manchester United left backs on the whole are good bets in this game, picking up a card in six of the last 12 derby clashes.

Scott McTominay might not have the booking pedigree of Shaw when it comes to the Manchester derby but the all-action midfielder has rarely been far from trouble in recent months.

He was lucky to avoid a sending off in his last appearance at Leeds and his yellow card at Elland Road made it three bookings on the spin for the Scotland international.

He has been booked nine times in his 23 starts since the start of November and could find himself chasing shadows for 90 minutes on Sunday.

It’s safe to say Manchester City have been a little more well-mannered than their rivals this season, accumulating just 36 cards compared to United’s 59, but Joao Cancelo is usually their best bet in the cards market.

The Portugal full-back has picked up seven bookings across the Premier League and Champions League this season and one of those came at Old Trafford when the sides met in November.

The 27-year-old has been carded in three of his last five Manchester derbies and looks solid value at 21/10.

Michael Oliver is this weekend’s man in the middle and has shown 57 yellow cards and two red cards in his 18 Premier League appointments this season.

He took charge of the derby earlier this season and has booked nine people in his two Manchester derbies since 2017.

Win tickets and accommodation for Manchester United vs Chelsea