Thanks to the staggered kick-off times and near constant television coverage of the Premier League, bet builders and same-game multis have taken off in a big way over the past year.

They allow punters to use their specialised football knowledge to build huge priced bets from single games and add a bit more excitement into watching the game. It’s not just about who wins and which team scores any more. With bet builders you can find yourself pumping your fist at a completed pass or tallying up the corner count in your head.

It does take a hefty amount of research though, and that’s where we come in. We’ve compiled all the most popular stats and markets into one handy Premier League bet builder cheat sheet below, and then we’re giving you some key takeaways to look out for ahead of the game.

Wondering where to build your bet? Why not take a look at bet365 below and get up to £100 in bet credits when you sign up.* 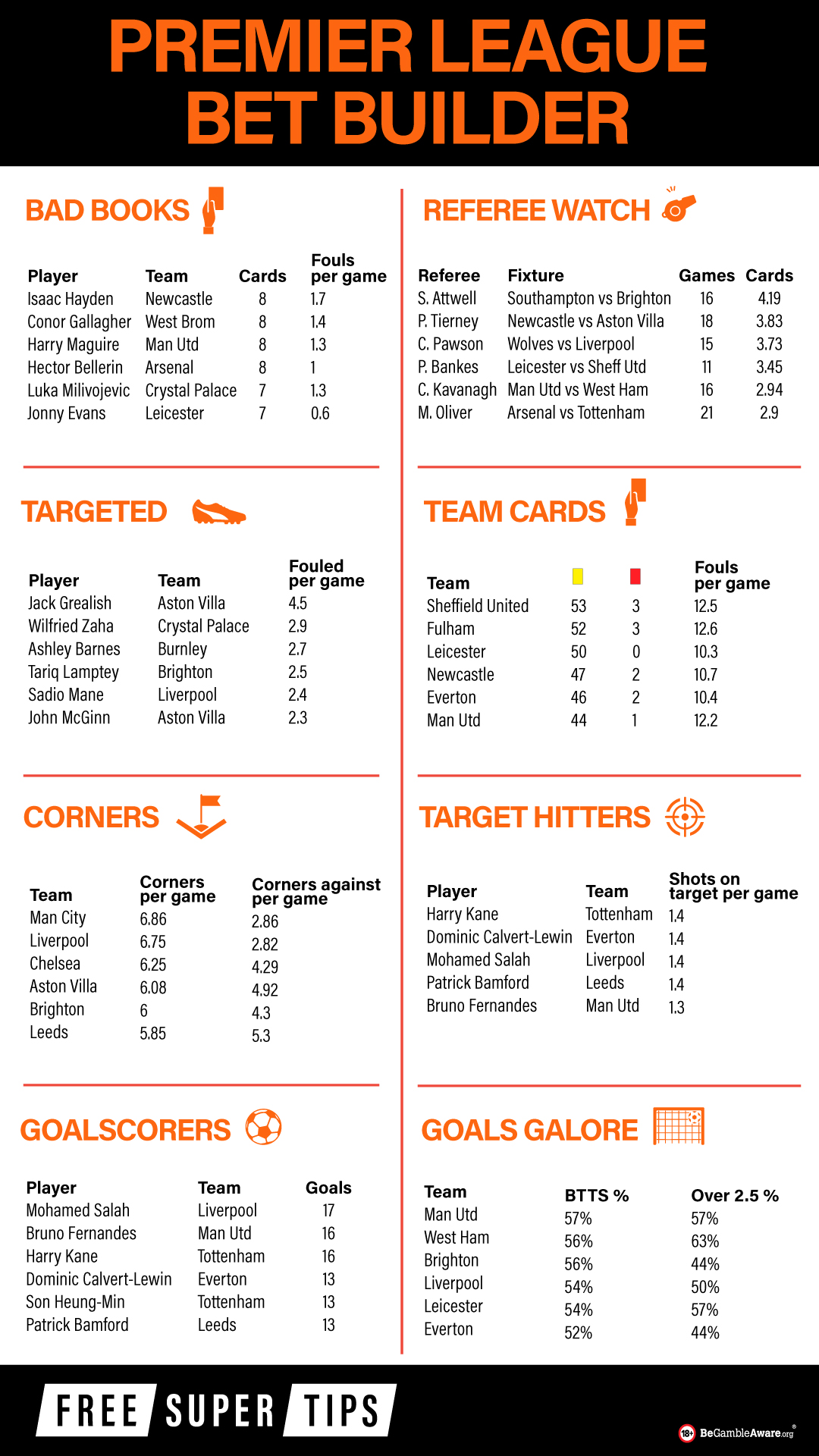 Conor Gallagher is joint top of the bookings table this season and on Saturday he’ll come up against one of the most fouled players in the Premier League.

Wilfried Zaha may not be in direct battle with the Baggies midfielder, but you can be sure Gallagher will get involved somewhere and a yellow card will never be far from the referee’s mind.

Betting tip: Conor Gallagher to be booked at 9/4

Harry Kane sits joint-second in the scoring charts and all signs point towards the Spurs talisman finding the mark again on Sunday. The North London Derby has turned into the Harry Kane show since the striker burst onto the scene and he has scored in nine of his 11 starts against Arsenal.

Not only that, but Kane’s brace in midweek took his tally to five goals from his last four outings. He did limp off against Dinamo Zagreb, but if he’s even close to fitness he’ll be risked in this most important of ties.

Only three teams have faced more shots on target than Burnley this season, with Nick Pope being tested 4.9 times per game on average. That rises to 5.46 away from home and on Saturday they visit top four hopefuls Everton at Goodison Park.

Dominic Calvert-Lewin has averaged 1.4 shots on target per game this term and has only failed to test the keeper in two of his last eight Premier League appearances, so he’ll be itching to hit a few shots at Pope.

Betting tip: Calvert-Lewin over 1.5 shots on target at 5/6

Corners galore for the Citizens at Craven Cottage

If you’ve paid any attention to our Premier League cards and corners predictions over the last few years, you’ll have noticed that Manchester City almost constantly top the charts.

Their relentless pressure forces a huge number of set-pieces and it’s no surprise to see them sitting on a league-high average of 6.86 corners per game. Fulham concede over five per game themselves, so expect the Citizens to dominate in this department again.

Only three referee’s dish out more cards per game in the Premier League than Peter Bankes, and his average could increase on Sunday when he stands in the middle of two of the most carded teams in the top flight.

Sheffield United, who head into this game managerless following Chris Wilder’s departure, have amassed a huge 53 bookings and three red cards this season. Opponents Leicester aren’t far behind on 50 bookings, making these two of the three most ill-disciplined sides in the top flight.

The Insider: Betting news you can back