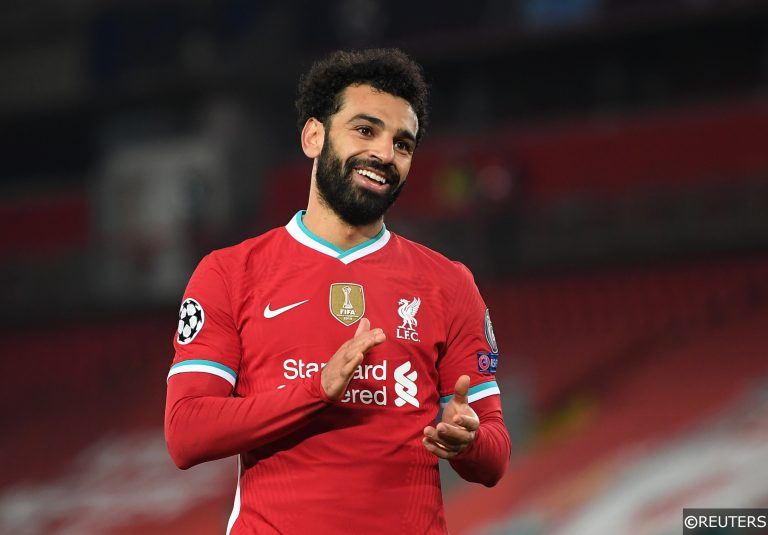 The Premier League’s full midweek fixture programme continues on Wednesday evening when six top-flight tussles are lined up for your viewing and punting pleasure.

Every single contest is being screened live on TV and we’ve delved into the numbers to help you make the most of the action with a selection of bet builder tips.

In the pick of the action, Liverpool travel to Burnley in a key clash in the race for a top-four finish, while Tottenham’s meeting with Aston Villa and Crystal Palace’s head-to-head with Arsenal are another pair of intriguing late-season skirmishes.

Newcastle should be in confident mood after they beat Leicester City and gave recently-crowned champions Manchester City a real run of their money, and the Magpies are worth backing to blunt the Blades as a result.

In London, Tottenham look a solid bet to oust an Aston Villa side that are limping over the campaign’s finish line. Spurs have won six of their last seven at home and their frontline boasts enough firepower to pocket three more points at the Villains’ expense.

Powered by the momentum from Alisson’s incredible headed winner at WBA, Liverpool are favourites to beat a Burnley team that just can’t seem to win at Turf Moor. The Clarets have gone nine matches without a win on their own patch and the Reds should turn them over.

With a fully fit again Jack Grealish back in the starting XI, Aston Villa could plunder a consolation effort against Tottenham. Spurs have kept just three clean sheets in their last ten matches, so back both teams to score in north London.

Crystal Palace have the tools to test Arsenal at Selhurst Park too. Both teams have scored in six of the last seven encounters between the Gunners and the Eagles and bettors could be rewarded by sticking to the same market on Wednesday.

At The Hawthorns, the same both teams to score market appeals when West Ham head to the West Midlands for a date with WBA. The Baggies enjoy going toe-to-toe with the Premier League’s better sides and five of their last seven fixtures produced goals at both ends.

Everton’s final home game of the campaign against Wolves might not be one for the purists. Seven of the Toffees’ last nine assignments produced under 2.5 goals, while eight of Wanderers’ last ten matches on the road saw under 2.5 goals scored. Expect another tight affair when these goal-shy sides square off at Goodison Park.

Supporters returning to the stands at St. James’ Park could be in for a more exciting evening however. Steve Bruce has taken the shackles off his Newcastle team and the Magpies’ last eight games spawned an average of 4.0 goals per 90 minutes. Their new forward-thinking philosophy could deliver over 2.5 goals again when Sheffield United visit.

We like the same over 2.5 goals bet for Burnley’s meeting with Liverpool at Turf Moor. The Reds have only kept four clean sheets in their last 18 league games and they will need their forward line to be on song to outgun a Clarets’ side wielding the red-hot Chris Wood.

With three crucial goals in this last four appearances, Golden Boot contender Mohamed Salah has been delivering the good at a pivotal time for Liverpool and the prolific Egyptian is a worthy anything goalscorer candidate at Turf Moor as a result.

Christian Benteke is finishing the season with a flourish and the Belgian striker has scored in each of his last three run outs for Palace. The in-form 30-year-old is worth backing to notch again when he tests his skills against a brittle Arsenal defence at Selhurst Park.

With no goals from open play in his last five appearances, Jesse Lingard has gone off the boil a little for West Ham, though the loan star has two career goals against WBA and he could rediscover his touch at The Hawthorns.

Dominic Calvert-Lewin has been a key performer for Everton this season and the centre-forward tops the charts at The Toffees for both average attempts (2.5) and average attempts on target (1.4) per game in the Premier League.

In three of his last four appearances, Calvert-Lewin mustered two shots on target and the England hopeful can match that output against Wolves.

Joe Willock and Daniel Jebbison are the ones to watch at St. James’ Park in the same market. Willock will be keen to end his extremely productive loan spell with a bang against the Blades and having racked up four attempts and two efforts on target against Man City, the 21-year-old can test the opponents’ keeper again.

Jebbison meanwhile enjoyed a dream Premier League debut when he knocked in the winner against Everton and the promising 17-year-old can put his swelling confidence to good use by hitting 1+ shots on target against Newcastle.

Talismanic Villa star Jack Grealish could be worth backing to register at least one shot on target when he starts for the first time after his injury layoff at Spurs. The in-demand 25-year-old was averaging 0.8 strikes on target before his absence and he will be determined to make his presence felt upon his return.

No-nonsense midfielder Luka Milivojevic is in a race to bit for Palace’s meeting with Arsenal, though the Serbian anchorman remains your best bet to get booked at Selhurst Park. The combative 30-year-old has already been cautioned eight times this term and he will stick his foot in where it hurts given half a chance against the Gunners.

At The Hawthorns, Conor Gallagher will be out to make a final positive impression before his loan spell ends with WBA, though his over enthusiastic streak has often landed him in trouble with referees. Gallagher has been booked an incredible ten times in 26 league starts for the Baggies in 2020/21 and he is the outstanding choice in the individual card market when Albion face West Ham as result.