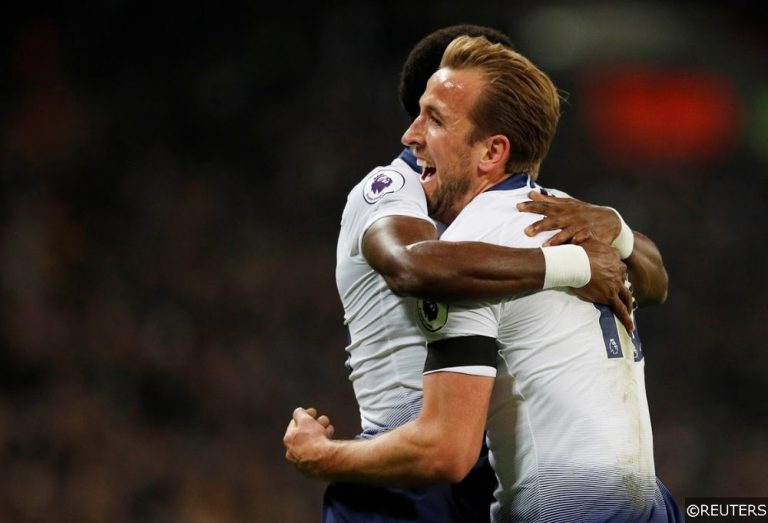 Mauricio Pochettino and Ole Gunnar Solskjaer go head-to-head at Wembley on Sunday in a battle between two of the bookmakers’ favourites to become the next permanent Manchester United manager.

After a blistering start and 5 straight wins for caretaker boss Solskjaer, an away fixture at Tottenham Hotspur represents his toughest challenge to date by some distance.

Spurs ran out comfortable 3-0 winners when the teams last met at Old Trafford in late August, and a repeat result this weekend could close the gap between Tottenham and league leaders Liverpool to just 3 points depending on other results this weekend.

Fixtures between Tottenham and United are generally some of the most compelling games in the Premier League calendar, and that makes it an ideal game to find some potentially lucrative selections from the bookmakers’ individual player markets and specials.

Check out the rest of our betting tips and predictions for Sunday’s game in our Tottenham Hotspur vs Manchester United match preview here.

Veteran Manchester United full-back and stand-in captain Ashley Young’s quality is often questioned, though the 33-year old’s commitment has never been in doubt.

Over the past couple of years, the aggression and intensity in Young’s game has noticeably cranked up a few notches. Last season, Young was booked 7 times in 28 Premier League starts, and the converted winger looks set to smash that total this term.

Young has already been shown yellow 6 times in just 14 Premier League starts with the summer, and on Sunday he is likely to come up in direct opposition to the red-hot Son-Heng Min.

The South Korean international has promised Spurs fans he will leave on a high this weekend as he prepares to jet off to the Far East for the Asian Cup after the match at Wembley.

Son’s pace and movement is almost certain to cause Young problems down United’s right, and that makes bet365’s 9/4 odds on the former England-man getting booked again an extremely generous looking price.

When playing at his fluid best, Pogba is central to everything good United do in the opponent’s half. The former Juventus star has averaged 64.6 passes per game in the Premier League this season – the second highest figure at United and the 14th highest in the division in 2018/19.

However, in bigger games, Pogba often finds himself drifting on the periphery of the action. The midfielder didn’t start against either Liverpool or Arsenal, though he played just 38 passes at Stamford Bridge against Chelsea in October, and only 43 against Tottenham in the reverse fixture between the teams at Old Trafford in August.

With Pogba’s well-established inability to shine regularly in big-games considered, we think the 8/13 odds with bet365 on him playing under 69.5 passes against Spurs look great value.

Belgian international and long-time Manchester United transfer target Toby Alderweireld has been defending with more brains than brawn for Tottenham this season.

Alderweireld has completed 5.8 clearances on average per game in 2018/19, though the 29-year old has made a remarkably low number of tackles per ninety minutes this term.

The centre half has averaged just 0.9 tackles per Premier League match this season, and Alderweireld made 2 or more tackles in just 5 of his 19 appearances in the division in the same period.

At Wembley, Alderweireld has made 2 tackles or more just twice so far this season, in games against Liverpool (2) and Manchester City (2).

The cultured Belgian defender is available at evens with bet365 to make under 1.5 tackles in Sunday’s game.

Like many of his United teammates, Marcus Rashford has looked recharged and reinvigorated since Ole Gunnar Solskjaer’s appointment as caretaker manager

Combining relentless running with his arsenal of tricks and turns, Rashford has been blitzing defences over the past few weeks, and the 21-year old’s performances probably deserved a higher return than the 2 goals and 2 assists he did collect since the end of December.

Reports emerging this week suggested that he has been made United’s number one choice at centre forward by Solskjaer ahead of Romelu Lukaku, and looking at Rashford’s numbers, it’s easy to see why.

The United academy graduate had an impressive 18 attempts on goal in his games against Cardiff, Huddersfield, Bournemouth and Newcastle – a total that breaks down to an average of 4.5 shots per 90 minutes.

Of course, being on free-kick duty has helped Rashford push those numbers higher, and with the help of his dead-ball responsibilities, we expect him to maintain his healthy shot figures on Sunday. You can back Rashford to have over 2.5 shots against Spurs at evens with bet365.