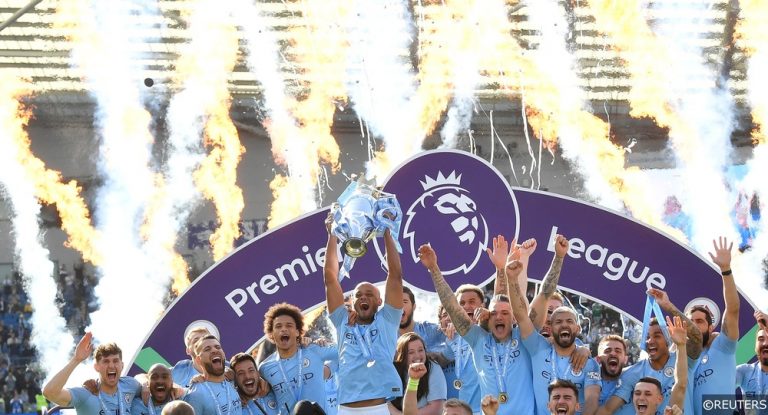 The final day of the Premier League season is almost upon us and all 20 teams are in action at the same time on Sunday.

With some sides still having it all to play for and others having already packed their beach towels, the final round of top-flight action can often throw up some crazy results and many associate it with plenty of goals, but is that actually the case?

Make sure to check out all our detailed analysis for Sunday’s games on our Premier League predictions page, too.

The first thing that comes to mind when we think about the final day is goalfests and it makes sense. Some teams are in desperate need of a result, others are plodding around lackadaisically waiting for the final whistle and some, with nothing to play for, just want to throw caution to the wind and go out with a bang.

As it happens, this is exactly the case.

The final day of the Premier League season, on average, sees a rise in BTTS%, Over 2.5 Goals% and average goals per game compared to the season average.

2016/17 witnessed the biggest rise in goals per game, with thrashings dished out by Chelsea, Spurs and Manchester City resulting in 3.7 goals per game. The year before, 2015/16, enjoyed the largest bump in BTTS and Over 2.5 goals occurrences with 80% and 70% respectively, while last year was one of only two seasons in this period to see fewer than half the teams involved score (40%). 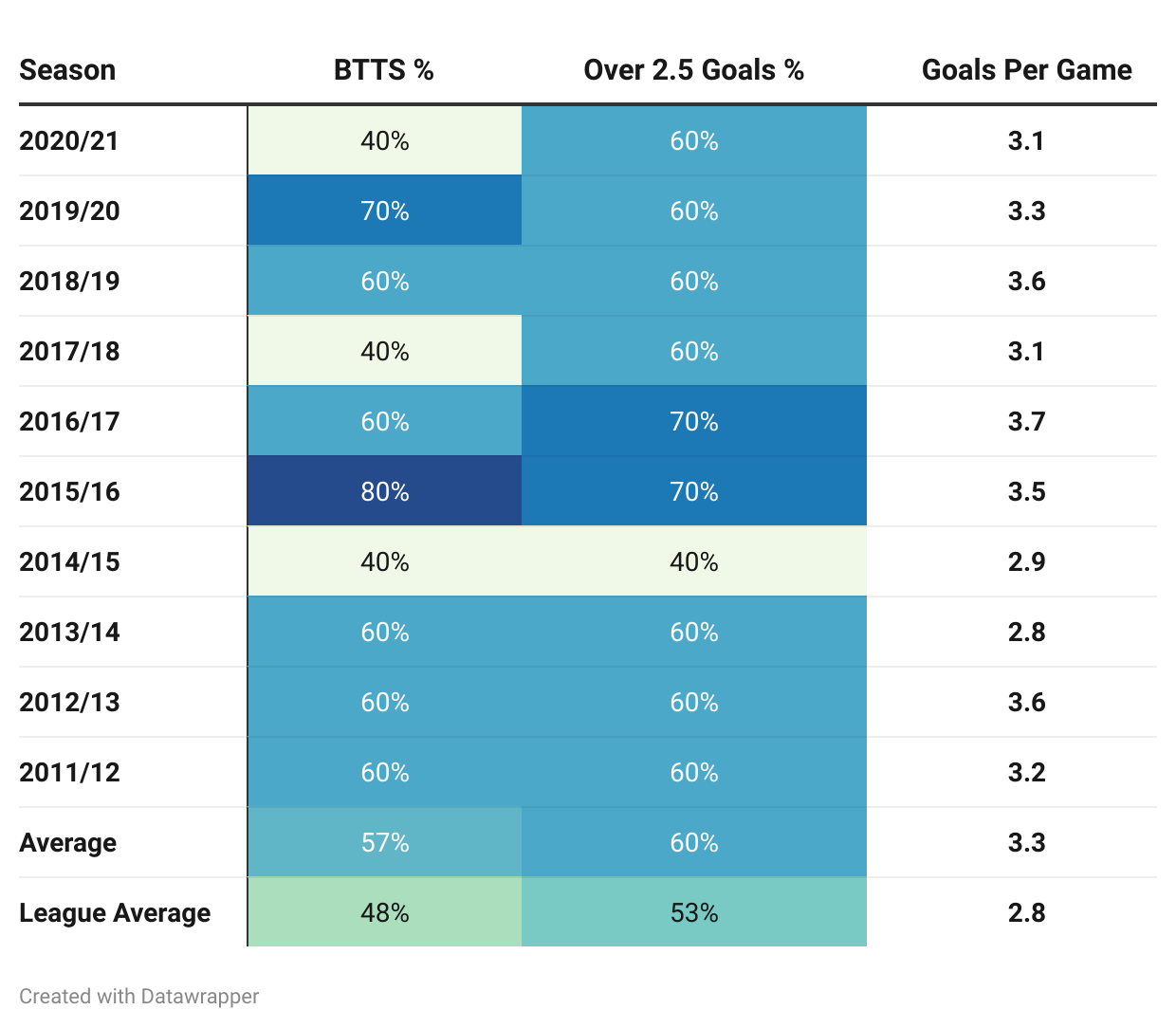 Interestingly, at least 60% of final-day games in each of the last ten seasons have gone over the 2.5 goal line and only two seasons have averaged fewer than three goals per game, although even those instances were higher than this season’s 2.79 goals per game average throughout the campaign.

This opens the door to a couple of enticing specials from the bookies. You can back at least two goals to be scored in each game below, bearing in mind that a huge 85% of final-day games over the last decade have seen at least two goals and there have been just two goalless draws across this 100-game sample.

If you’re more interested in the total number of goals, there is an average of 33 goals scored in the final round of fixtures over the last ten seasons and at least 34 have been netted in four of these, so backing 34+ total goals is worth consideration.

Teams don’t settle for draws on the final day

Now that we have discussed the increased rate of scoring, what about the results themselves? Does the final day of the season see more upsets or is it business as usual? 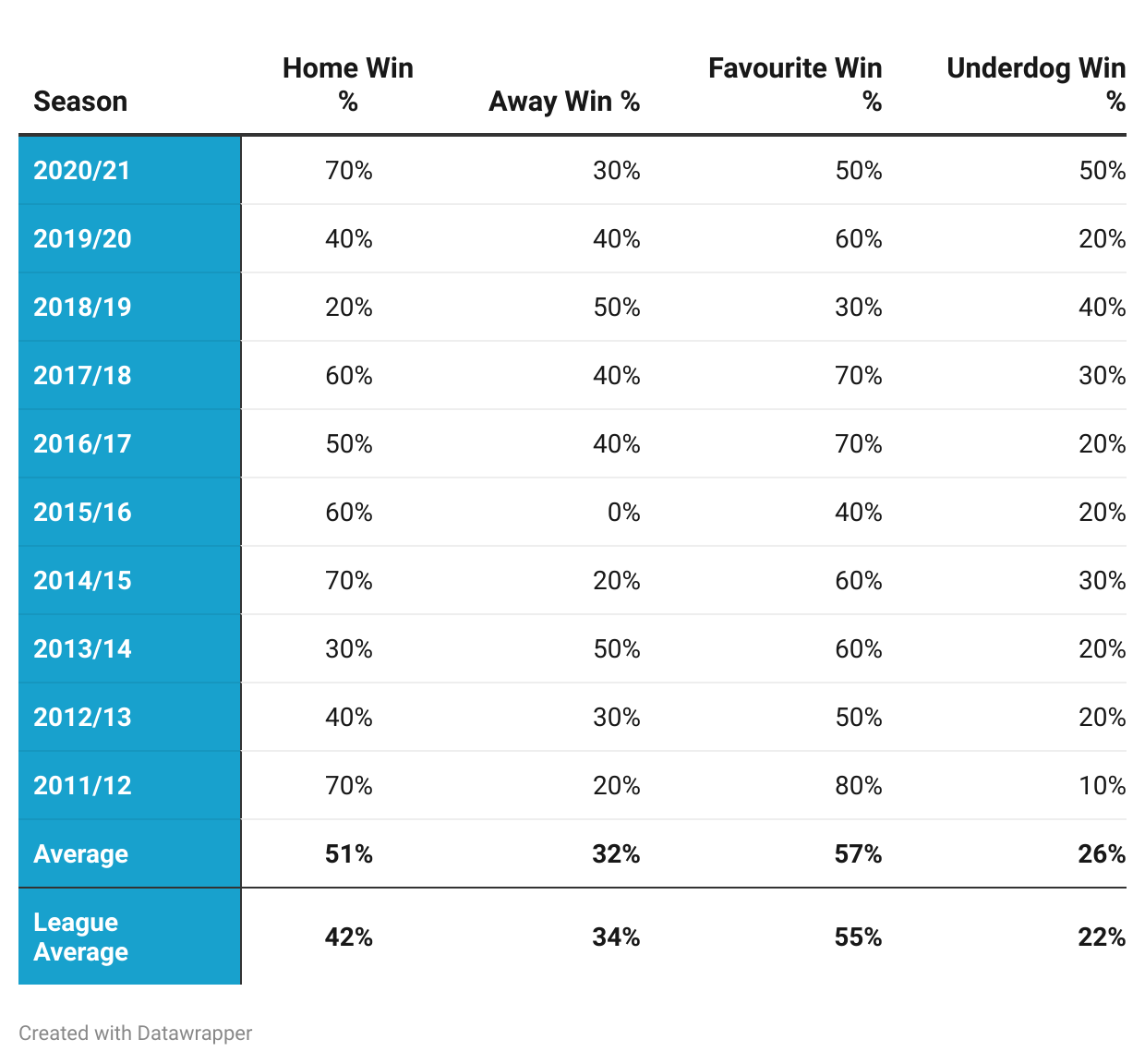 The biggest change is a significant increase in the number of home teams winning, with 51% of home sides winning on the final day compared to a Premier League average of around 42%. As a result, there are 7% fewer draws and an almost insignificant drop of 2% for away victories, with five of the ten seasons analysed having no more than one stalemate recorded.

In fact, two of the last four Premier League final days have seen a winner in every single fixture and a whopping 35 of the 40 games played in this period have awarded three points to one of the teams. You can back all games to have a winner on Sunday below.

When it comes to the betting odds, this reduction in draws leads to a slight increase in the number of time a favourite wins (57% from 55%) and a larger increase (26% from 22%) of underdogs defying the odds. With this in mind, backing the home underdogs could be a route to go down, although with only two home underdogs playing this weekend and one of them being Norwich that might be one to avoid this season.