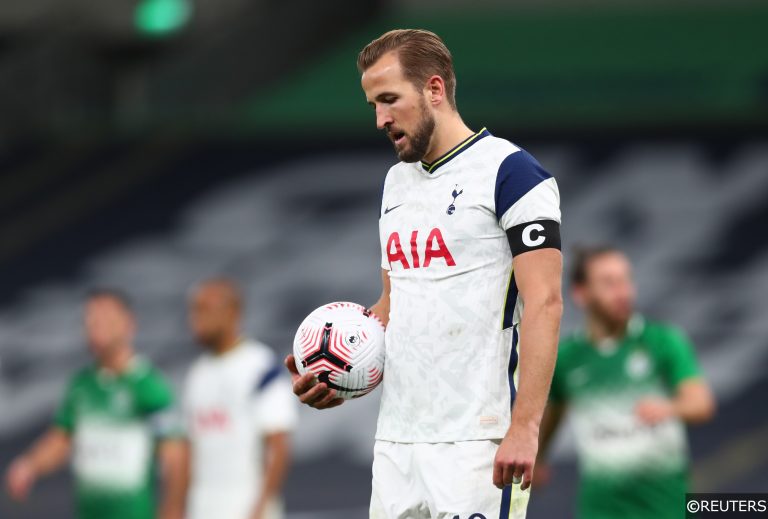 The 2020/21 Premier League is hurtling towards the finish line and running alongside the battle for crucial points and places, the race to finish as the division’s leading marksman is also gathering pace.

With a handful of fixtures left to contest, the Premier League’s lengthy list goal-getters and match-winners are gearing up to launch a late charge to land the Golden Boot ahead of their rivals.

Last year, Leicester City veteran Jamie Vardy landed the gong thanks to his superb 23-goal haul for the Foxes, though the 34-year-old is preparing to hand his top scorer’s slipper over to someone else this month.

Let’s take a closer look at some of the contenders and the latest odds for this season’s Golden Boot.

Remember – we’ll be covering the run in in detail with betting tips and special offers on our Premier League predictions page.

Tottenham talisman Harry Kane currently tops the pile for both goals and assists in the Premier League after a phenomenally productive campaign and the 27-year-old is odds on favourite to land the third Golden Boot of his career in 2020/21.

The last four winners of the accolade all notched 23 or fewer goals and Kane is well on course to push past that total for Tottenham this term. Spurs have some tricky assignments left to navigate however, and Kane could be pipped to the boot by his closest competitor.

Liverpool’s domestic campaign could have hardly gone worse in 2020/21 and their meek title defence is shaping up to be one of the worst in Premier League history, however, on individual level, Mohamed Salah has kept his standards high.

The Egyptian attacker is aiming to become just the third Premier League player ever to win three Golden Boots on the spin this year, and Salah is FST’s favourite at 10/11 to complete his hattrick.

Salah is currently just one goal shy of Kane at the top of the charts as things stand, though a glance at Liverpool’s remaining fixtures shows a gauntlet of games that look potentially goal-laden for the Reds and their 28-year-old superstar.

Few midfielders are as prolific in front of goal as Bruno Fernandes, though half of the schemer’s efforts in the league have been hit from the penalty spot.

The 26-year-old would need everything to go his way to overtake both Kane and Salah before the campaign closes, a feat made all the more difficult when you consider that Fernandes has notched twice in just two Premier League fixtures for United this term.

Everton striker Dominic Calvert-Lewin is already enjoying his most bountiful Premier League season thanks to his career best 15 goals, and while he is expected to add to his tally before the end of May, the England man stands little chance of claiming the Golden Boot.

Calvert-Lewin is relatively unique in that 100% of his Premier League goals this season have come from open play. In fact, the 24-year-old is the only player among the division’s top 12 leading marksmen that hasn’t bagged a single goal from the penalty spot.

While his open play figures are admirable, being down the spot kick pecking order at the Toffees will always limit his Golden Boot winning prospects.

Despite matching Bruno Fernandes’ total (16) for the campaign so far, Spurs forward Son Heung-min is priced at much larger 66/1 odds to mount a late surge for Golden Boot glory.

A run of three goals from his last four league starts suggests the South Korean can finish the season in productive fashion, though like Calvert-Lewin, Son is one of the few players in the running for the Golden Boot that won’t be able to swell his numbers with penalty kicks.

Just one of his goals this season was hit from the spot, compared to four for Kane, six for Salah and a massive eight for Bruno Fernandes.