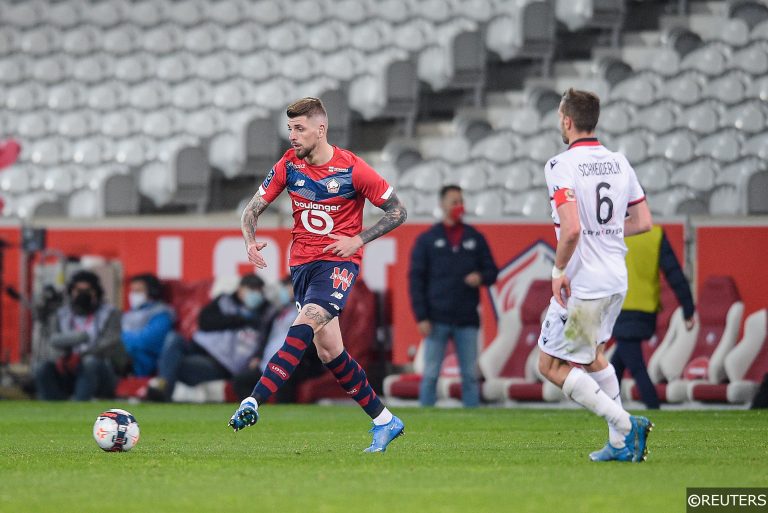 It’s a busy week of football as Europe’s top leagues edge towards the end of the season. While the Champions League is taking the headlines, the next few days feature some big games around Europe with plenty riding on them.

In the coming days we could see Portugal’s champion crowned and a big step for Ligue 1’s surprise leaders. On top of that there’s a big clash between Benfica and Porto in Portugal and a potential thriller as two of the Bundesliga’s worst defences meet.

The good news that all these games and more are available through bet365’s live streaming*. Below you can see our pick of the live streaming games, alongside an 18/1 accumulator tip. For more predictions, head over to our free football tips page.

Before Tuesday night’s Champions League action, there’s an early game from the German second-tier. These two sides could be two leagues apart next term, with Holsten Kiel making a push for promotion and the visitors sitting just outside the bottom three.

However, the hosts have won just two of their last six games and four of those have seen both teams score. The visitors have been making more of an impression going forward and with seven of the last eight ties between these two sides seeing both teams score expect goals here.

Wednesday night sees Sporting Lisbon continue their bid for the Portuguese title, with the club six points clear with four to play. However, they can take a big step forward with a win in midweek.

The visitors have won three of their last four and they’ve won 12 of 15 trips this term. Rio Ave are winless in their last eight and we’re backing that to continue against Portugal’s best side.

Hertha are in serious trouble, sitting second-bottom and bound for the second division. Defensively the hosts are a mess, conceding in six of their last seven at home. They’ve conceded 26 times in 14 home matches, so this isn’t likely to be a dull clash.

Freiburg can prey on Hertha’s poor defence, but the visitors have conceded in 86% of their games on the road. We struggle to back either defence in this one.

Both Benfica and Porto are in fine form coming into this one, as they chase a spot in next season’s Champions League group stage. Benfica are making a real push for second, having won 10 of their last 11 matches.

Porto have only lost once on the road in the league this season, but they’ve conceded twice away to each of the top five so far. We see Benfica following that lead, with the hosts scoring 1.93 goals per Liga Nos match.

Lille beat Nice at the weekend to keep their one point lead at the top of Ligue 1. They play before PSG this weekend and could move four points clear of the Parisians, who would only have three games to turn things around.

Lille’s brilliant season has been based on some good results on the road, as they’ve won 12 of their 17 trips this term. Lille have won their last three Ligue 1 trips including wins at Lyon and PSG so we expect them to beat a Lens side who lost 4-0 in the reverse fixture.