The Premier League Team Of The Year 2016 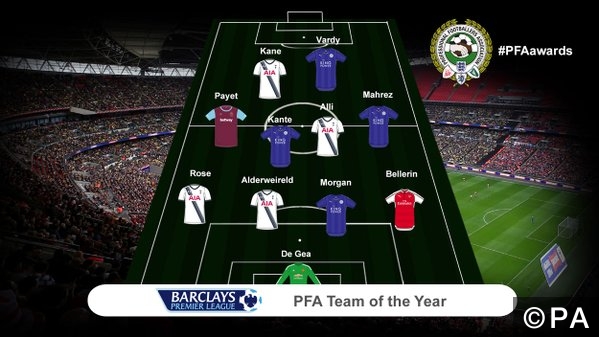 The PFA Barclays Premier League Team of the Year 2016 has been announced and as usual there are some big names missing!

The majority of the team is made up of players from Leicester and Spurs as the top two sides in the league account for eight of the eleven. Arsenal, Man United & West Ham each have one player representing them in this years side but there is no room for any Man City player meaning they are the only team in the top six to not have any players included.

Mesut Ozil is the obvious one. He was the only player nominated for the PFA Player of the Year to not make the team of the year. The Arsenal midfielder has scored 6 goals & 18 assists so far this season and could still be announced as the player of the year on Sunday 24th April.

Jack Butland has had an incredible season at Stoke only for it to be abruptly ended early by an injury whilst playing for England. The shot stopper had kept 10 clean sheets and has been nominated for the young player of the year.

Philippe Coutinho is another nominee for the young player of the year. The Brazilian has got 6 assists & 8 goals and has been one of if not the standout player for Liverpool this season.

Ross Barkley was nominated for the young player of the year but missed out on the team of the year. With 8 goals & 8 assists for the Toffees he has been fantastic but it would be very difficult to put him in ahead of the midfielders that did make it.

Romelu Lukaku has managed 18 goals & 6 assists for Everton this season but does not make the cut. He has also been nominated for the young player of the year.

Sergio Aguero is joint-second in the scoring charts along side Vardy despite playing over 800 minutes less. Man City’s main man does not make the team and has now missed out every season he’s played in the Premier League.

Cesc Fabregas chose his team of the year on Monday Night Football last week and it wasn’t too dissimilar to the final team:

Cesc Fabregas picks his Premier League team of the year on #MNF. Who makes your XI? https://t.co/VzfaaJLJ1Opic.twitter.com/qMOQm5kJb2

Who should be in?

Do you agree with the 2016 team of the year? Let us know what you think by dropping us a tweet @FootySuperTips