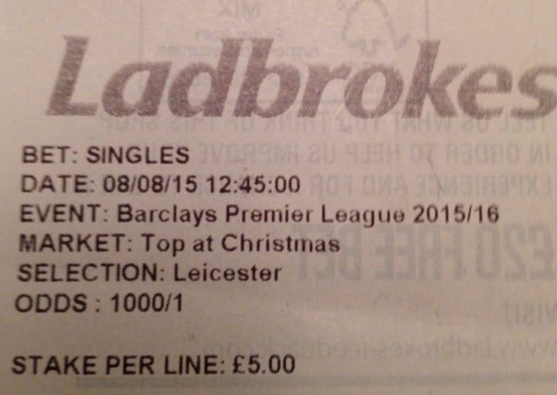 Christmas has come early for one lucky punter as he scooped a huge £5,000 profit on a pre-season bet from bookmaker Ladbrokes

Whilst the current Premier League table has come as a shock to many, This Ladbrokes customer predicted it all along as he placed a £5 pre-season bet on Leicester to be top of the table come Christmas Day at odds of 1000/1!

The Foxes 3-2 triumph at Goodison Park on Saturday meant no matter what the outcome in the Arsenal v Man City clash is on Monday, Leicester City would be top of the tree at Christmas.

His tactics paid dividends as an attacking, expansive Leicester City side brushed away teams in emphatic style including putting the final nail in Jose Mourinho’s coffin when they beat the current Premier League champions Chelsea 2-1 at the King Power Stadium.

Rest assured, like Ranieri, this punters Christmas plans may be subject to some “tinkering” following his huge coup.

Don’t forget to check out our Premier League tips and predictions every week!