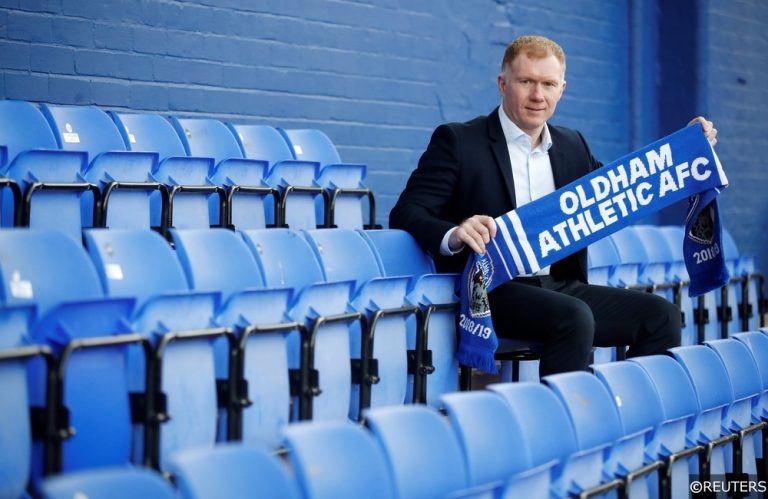 Following the departure of Frankie Bunn after just six months in charge, Oldham Athletic were left looking for their second manager of the season as they bid to recover their beleaguered campaign. Step forward home town hero and Manchester United legend, Paul Scholes.

On Monday, the 44-years-old signed an 18 month contract to take over at the team he has supported as a child and the former England international will be hoping he can get off to a strong start in his first managerial appointment.

However, things have not been smooth sailing prior to his appointment, so in this post we take an in depth look at his other ties, the team he has inherited and their chances of success in League Two.

You can read all our tips and predictions for the upcoming action on our League 2 betting homepage.

Complication ahead of the appointment

Paul Scholes has almost done it all as a player and is one of the finest talents this country has ever produced. As part of the famed ‘Class of 92’ at Manchester United, Scholes won multiple Premier League titles, FA Cups, Champions Leagues and League Cups.

Since hanging up the boots, Scholes once again teamed up with his fellow members of the ‘Class of 92’ and took over non-league Salford City. The financial backing the group was able to provide helped the Ammies build up their stadium, a new youth system and a solid first team which has seen the side promoted three times and into the National League.

However, with Salford now fighting to win promotion to the Football League for the first time in their history, things got a little complicated before Scholes could be appointed. EFL rules prevent a person holding roles with two clubs at the same time without prior consent, although a holding of 10% or less in a club is disregarded providing it is held “purely for investment purposes”.

“Although Paul was never operational in Salford City he will resign as a director of the football club, allowing him to focus completely on his new role at Oldham,” Salford said in a statement. However, he has been given the green light by the FA, and he celebrated his appointment in perfect style in his first match on Tuesday evening as his side saw off Yeovil Town in a dominant 4-1 victory.

What has Scholes inherited?

Academy manager Pete Wild has been at the helm since the Latics sacked Frankie Bunn on 27 December after a 6-0 defeat against Carlisle United. Bunn was only appointed last summer following Oldham’s relegation from League One.

Despite only taking the job on Monday, Scholes was thrown right into the mix almost immediately as his side faced off against Yeovil Town. Jose Baxter curled in a shot to put Oldham ahead in first-half stoppage time and Callum Lang headed in a second just after the break. Bevis Mugabi stabbed in a goal back for Yeovil before late goals from Mohammed Maouche and Christopher Missilou. The two strikes that wrapped up victory for the Latics were both fine efforts from outside the penalty area.

That result means that Oldham are back into contention for the play-off places and, although they played on Tuesday whilst most of the sides in the division were without a fixture, they still have another game in hand on the majority of the sides ahead of them. With just six points separating the Latics from the top seven, it seems certain that Scholes is looking up rather than being concerned by what lies beneath.

Does the ‘Class of 92’ guarantee success?

Well, the short answer to this one is no. Scholes is one of the last graduates from the ‘Class of 92’ to make the transition into management, and the story so far has been a pretty mixed bag.

The most obvious place to start is with the Neville brothers. Gary Neville is well known for his insight on Sky Sports as a pundit, but he put his money where his mouth was and took a job with Valencia in December 2015. With just 10 wins from the 28 contests he took charge of, he was sacked after less than four months in the job.

His brother, on the other hand, has enjoyed a pretty solid start to life as manager of the England women’s team. He has won five of his eight matches so far and has a World Cup to look forward to this summer.

Speaking of international managers, Ryan Giggs proved successful during his tenure as caretaker Manchester United boss and has now taken over of the Welsh national side. He is yet to prove himself in the role but a tough qualification for Euro 2020 will soon put his skills to the test.

Lesser known Chris Casper and Simon Davies also went into management with Bury and Chester City respectively, but the fact that neither have managed to attract the attention of another club to appoint them as their new boss probably suggests all you need to know about the success they enjoyed.

What does the rest of the season hold?

So you know the name and you know the team, but what can be accomplished for the remainder of the season? Most bookies have markets on the likes of league winners, top half and relegation, but these are markets which do not appeal to us.

With just 15 games left this season, a promotion run looks to be extremely unlikely and odds of around 500/1 shows just what a long shot this is. In the same breath, the Latics have a comfortable cushion over the bottom two and relegation also looks to be just as unlikely.

Although many of his fellow ‘Class of 92’ graduates have struggled to make a success of things, Scholes seems to be a pretty solid appointment for Oldham and a shot at promotion should not be ruled out. In fact, at odds of 5/2 they look a great price to end up occupying one of the top 7 spots in League 2.