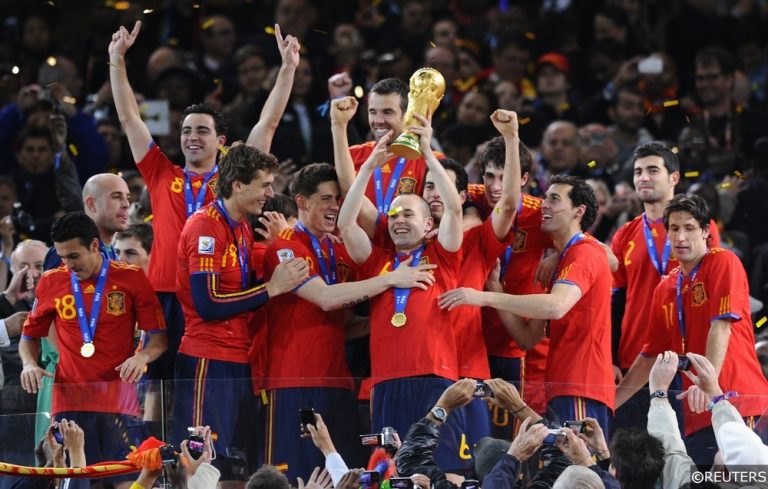 Even before their recent glory years, Spain were viewed as one of the true giants of international football having produced an array of star names down the years. However not until success at Euro 2008, did La Roja really start to transform individual talent into collective brilliance and finally move on from their reputation as chokers on the big stage.

Heading into the 2010 tournament in South Africa, they’d only once made it past the Quarter-Finals at a World Cup. They’d never previously won more than three matches at a single tournament but they managed twice that number eight years ago to be crowned world champions for the first time.

Inevitably it is the class of 2010 that forms the core of Spain’s best ever World Cup XI:

Read more: How Spain may line up in Russia this summer

Spain’s most-capped player of all-time Iker Casillas may be disappointed but the legendary Ricardo Zamora gets the nod in goal. He skippered Spain at the 1934 World Cup, their first ever appearance at the competition and helped his side to a victory over Brazil before a narrow defeat to eventual winners Italy in the Quarter-Finals. That clash was actually settled by a replay in Florence, just a day after the original clash ended 1-1. Had Spain emerged victorious, there’s a good chance that they would have gone all the way and won the tournament with a talented squad.

Zamora is widely regarded as the greatest keeper in the pre-war era with his international career lasting from 1920 to the start of the Spanish Civil War in 1936 by which point the Catalan was playing his club football for Real Madrid. To this day, the best goalkeeper each season in La Liga is rewarded with the Zamora Trophy.

In more recent times, Jose Antonio Camacho is best known for being Spain’s sweaty 2002 World Cup coach which ended in La Roja suffering a shock defeat to hosts South Korea. However he was also a very fine player in his day and the standout candidate for the left-back position in Spain’s best ever World Cup XI.

As well as appearing over 400 times for Real Madrid, Camacho won 81 caps for Spain between 1975 and 1988. He was a leading force in a strong Spanish side of the mid-1980’s which reached the Final of Euro 1984 and last eight at the World Cup in Mexico two years later.

Hace 6 años marqué uno de los goles más importantes de mi carera The first of Spain’s golden generation to get the nod is Carles Puyol. The Barcelona legend is now 40 years old but was still very much at the top of his game in South Africa in 2010 as Spain finally won the World Cup. The shaggy-haired Catalan won admirers far and wide for his uncompromising defending and was a key figure in a shift towards a more united Spanish side that flourished for four years from 2008 to 2012. The Barcelona legend retired from international football on exactly 100 caps in 2013 and is one of the few players to have earned respect on both sides of the Barca-Real divide.

An honourable mention should probably go to Gerard Pique at this point, who it’s fair to say has been a bit more controversial than his mentor at Barcelona but Pique has rarely let La Roja down. However it is Fernando Hierro who completes a centre-back pairing that certainly wouldn’t take any prisoners.

Hierro is certainly a good fit for this team having featured at four separate World Cups, an impressive feat in the modern era. While he declined in his latter years, Hierro was pretty much the complete defender throughout the 1990’s. He could certainly handle the ugly stuff while he was equally comfortable on the ball and had a real eye for a goal. Remarkably Hierro is still fifth in the list of Spain’s top goalscorers with 29 international strikes. His goals-per-game ratio is comparable to that of Fernando Torres, one of the four men above him.

Spain hasn’t always flourished in the full-back department and while Sergio Ramos is best known as a central defender these days, he did occupy the right-back role as Spain competed at the 2006 World Cup and again four years later as they won the 2010 tournament in South Africa.

A bit like Hierro, he has a knack of popping up with a goal and certainly his commitment to the Spanish cause cannot be doubted. Only Iker Casillas has won more caps for Spain than Ramos, who will feature in his fourth World Cup this summer and will undoubtedly go down as one of the Spanish national side’s all-time great defenders. Ramos will be aiming to end his international career on a high by leading La Roja to glory in Russia.

The central midfield picks itself really with the trusty Barcelona duo of Xavi and Iniesta, the key forces behind Spain’s recent era of dominance. It’s interesting to note that it was only really 2010 when Iniesta started to climb out of Xavi’s shadow in terms of the plaudits he was receiving and that’s testament to the level Xavi was performing at during an international career that spanned 14 years.

His vision, ball control and pinpoint passing accuracy was largely unrivalled and unquestionably Xavi is worthy of his place in Spain’s all-time World Cup XI. His international career may be over now but he has been strongly tipped to coach Qatar when they host the tournament in 2022 so his World Cup journey may not be over just yet.

It’s very tough to choose between Andres Iniesta and Xavi but there is certainly room for both of them in this eleven. Between them they passed opposing teams into submission for club and country for the best part of a decade and the younger Iniesta remains a player capable of dictating football matches from midfield.

He also of course scored the most significant goal in Spanish football history with his Extra-Time strike in the Final of the 2010 World Cup and has been warmly received on just about every Spanish ground he has visited since. Iniesta is certainly unique in his ability to become both a Barcelona and Spain legend during difficult political times.

Read more: Can Spain rediscover their dominance under Lopetegui?

Mention Luis Suarez these days and of course minds immediately wander to a certain Uruguayan striker but once upon a time, the Spanish Luis Suarez was one of the true stars of the world game. The attacking midfielder won the Ballon d’Or in 1960 and finished in the top three a further three times in a career perhaps best defined by a nine year spell in Italy with Inter.

The Galician-born playmaker also had a 15 year international career during an era when Spain won the European Championship in 1964, their only major tournament success prior to 2008.

Winger Paco Gento was another to flourish over that era. As well as winning a ridiculous 12 league titles and 6 European Cups with Real Madrid, Gento starred for Spain although La Roja generally struggled on the global stage during that period, exiting the World Cup at the group stage in both 1962 and 1966 despite their European triumph sandwiched in between. Gento was the Spanish skipper in 66 when Spain were narrowly edged out in a tough group which included both Argentina and West Germany.

Amancio Amaro occupied the opposite flank to Gento for a while for both club and country and starred in Spain’s Euro 1964 campaign. Like many of his peers before and since, his talents wouldn’t be rewarded by World Cup success but he did score the goal that gave Spain their only win in England in 1966.

He was a winger with a real eye for a goal and twice won the Pichichi Trophy, awarded to the top scorer in La Liga. His international career ended as Spain failed to reach the 1974 World Cup but he certainly remains one of the best wide players the country has produced.

The stats don’t lie when it comes to David Villa. With 59 international goals, he is 15 clear of Raul at the head of the list of Spain’s most prolific forwards. Only four other Spaniards are even halfway to Villa’s tally, which is a record that could well stand the test of time, particularly given the current lack of top strikers in the country.

Villa was the joint top scorer at the 2010 World Cup with five goals and it’s worth noting that Spain only scored three other goals during that tournament. Without Villa’s killer instinct and finishing touch, there’s a good chance that La Roja would still be waiting for their first world crown.