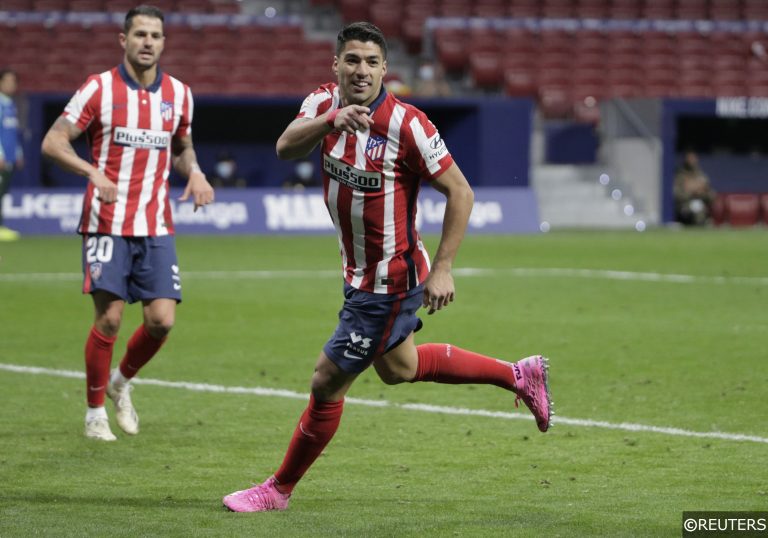 The Premier League is often touted as the most competitive league in the world, but this season nothing could be further from the truth. Manchester City sit a full 14 points clear at the top of the table and there is little sign to suggest their winning streak will come to an end anytime soon.

Meanwhile, across Europe there are a hatful of shocks and interesting stories developing, including unlikely leaders in three of the other four top European leagues.

We’ve delved into all the developments to bring you up to speed ahead of the run-in, and remember to check our Match Predictions page for all the latest betting tips from Europe’s top five leagues.

The days of Real Madrid and Barcelona dominating domestically and in Europe are gone, with the pair looking a shadow of their former selves. That’s allowed Atletico Madrid to leap out in front, just as they did during their shock 2014 title win.

However, this time around Atletico aren’t the massive outsiders. Diego Simeone has transformed them into one of Europe’s biggest clubs. Simeone has also let his side off the leash, as they’re La Liga’s second-highest scorers on top of boasting the best defence.

This Atletico side should worry Real and Barca more than the functional 2014 edition. This is a younger side methodically built towards title success. They’re striking at a time when the big two need a complete overhaul, while Europe’s elite are in no position to raid Atleti’s stars this summer. Simeone’s men should see off the title from here, which could be the first of many.

Billionaire-backed, 18-time champions Inter Milan aren’t exactly underdogs, but after nine-years of Juventus dominance any kind of change seems good. Antonio Conte was brought to Inter with the Scudetto as his goal and after last season’s misfire Inter lead the way.

Inter CEO Beppe Marotta was in charge of Juve as they started their long reign as Italian champions. Conte was the manager for the first three seasons of that run, so it feels like Juve are being beaten at their own game here. Meanwhile, the usually stable champions are onto their third manager in three years and newcomer Andrea Pirlo is taking time to settle in.

That led to AC Milan leading for much of the season, but the Rossoneri now seem to be falling away as they prioritise a top-four finish over title dreams. That leaves the floor open to Inter, with Conte facing a win or bust scenario in Serie A after flopping in Europe and the Coppa Italia.

It’s not exactly business as usual in the Bundesliga despite Bayern leading the way again. The Bavarians have continued their success with three more trophies in 2020/21, but their extra commitments in the most intense season in recent years could be a problem.

Bayern are just two points clear of RB Leipzig ahead of this weekend’s Der Klassiker clash with Borussia Dortmund. With Leipzig winning their last five in a row, the pressure is on in the title fight.

Bayern have still to visit both Leipzig and third-placed Wolfsburg, while Die Roten Bullen have a stellar home record and host the top four in the run-in. Bayern aren’t their usual, formidable selves this term and we’re backing that to allow up-and-comer Julian Nagelsmann to establish himself as one of Europe’s top managers.

Ligue 1 – Three teams battle to knock PSG off their perch

Ligue 1 has the most open title-race in Europe, with four sides fighting for the title and only three Champions League places. Monaco are fourth and four points shy of the top, with PSG underperforming and sitting in second.

Mauricio Pochettino hasn’t had the smoothest start since arriving in Paris. He’s not a proven winner, which opens up Ligue 1 to an outsider. Lille lead the way, but Lyon look like the league’s strongest side right now.

Lyon haven’t played any European football this term, so they’re fresher than Lille and PSG in his busy campaign. They also failed to win five of their six games, meaning they’ve picked up four points more than anyone else across the last 22 games. Given that fine turnaround, we’re backing them to take the Ligue 1 crown.

Scottish Premiership – Rangers could wrap up title at Celtic Park

The title is all but sealed in Scotland, where Rangers have the chance to go 21 points clear before Celtic’s next game. The Gers are 18 points clear of their Old Firm rivals and they could seal the title this weekend.

If Celtic can delay the inevitable this weekend, then Rangers could seal the title with a point at Celtic Park the following weekend. With the Bhoys in disarray and Steven Gerrard’s Gers still unbeaten, this race will be over before too long.

When Benfica brought back Jorge Jesus last summer the stage looked set for a huge battle between them and champions Porto. However, it’s been Sporting who have set the pace in a remarkable campaign.

Sporting are unbeaten after 21 games and they hold a nine-point lead with just 13 left to play. The Lions have an incredible defensive record, conceding only 10 goals this term.

This rise didn’t look possible when superstar Bruno Fernandes left the club. However, he’s been replaced by Pedro Goncalves, a midfielder who is the league’s top scorer with 14 goals in 19 starts. That incredible return should fire Sporting to glory.

When the Eredivisie stopped last March AZ were joint-top with Ajax and their youthful side is showing promise once more. They’ve moved into the top three, only two points shy of PSV in the second Champions League spot.

It’s going to be tough for AZ to close the eight-point gap to Ajax at the top. The current leaders have won 18 of 23 games this season and they look a cut above the rest. However, AZ have a bright future if they can keep this group together.