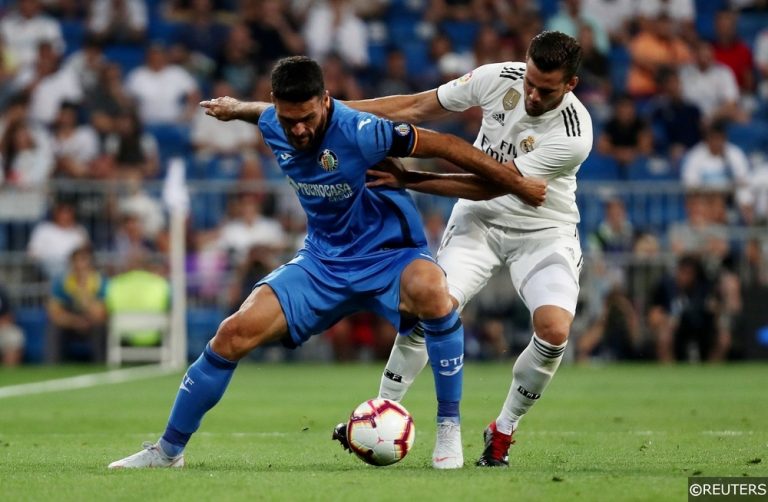 There’s live La Liga action throughout the day this Sunday on Premier Sports 2, with five Matchday 4 fixtures offering punters plenty to get their teeth into. We take a look at what’s to come and mark your card with some alternative betting tips and predictions for you to consider.

Remember, you can find our predictions and betting tips for every La Liga game this weekend here.

Espanyol are up against it after picking up just one point from their first three fixtures and won’t be relishing the trip to face Eibar this weekend having claimed only a single draw from their last four visits to Ipurua Municipal Stadium.

Eibar have made a similarly poor start to the campaign but this will be their first home assignment after three consecutive away games. The hosts are rightly favourites based on the recent head to head and their strong form at Ipurua last season, but we think the opening exchanges are likely to be tight with goals set to come in the second half.

60% goals in Eibar’s home matches stretching back to the start of last term have been scored in the second period, with the same applying to Espanyol’s fixtures on the road. The second half has outscored the first in three of the last four meetings between the pair, so Most Goals in the 2nd Half looks a decent pick here at a shade of odds-against.

Sevilla have made a strong start to life under new boss Julen Lopetegui after two wins and a draw from their opening three matches, but they won’t find this Sunday’s clash against Alaves easy after failing to win on their last five trips to Mendizorroza.

Alaves are also unbeaten three games in after one win and two draws and El Glorioso have looked far more solid thus far under their new manager Asier Garitano.

Both teams will want to stay unbeaten on Matchday 4 and that likely mentality combined with the pattern of fixtures to date makes Half Time Draw a good bet. Alaves have been level at the break in all three of their games this term whilst Sevilla have been all square in two of theirs.

Both of these sides can be pleased with how they have started the campaign and we look set for an entertaining clash at Balaidos on Matchday 4.

The hosts have averaged two goals per game in their last seven at home but have also conceded in six of those, so they will be wary of a Granada outfit who have so far managed to smash in seven goals on the road, with four netted against Villarreal on the opening weekend and three bagged at Espanyol a fortnight ago.

We expect Celta to prove too classy for the newly promoted side, but Both Teams to Score is a more than viable alternative to the match betting.

Osasuna have made a terrific start to life back in the top flight and are still unbeaten heading into Matchday 4 thanks to a fine 2-2 draw against champions Barcelona last time out.

They are the value call to pip Valladolid this Sunday but we don’t expect there to be much between the teams – particularly in the first half.

Valladolid have been level at the break in all of their games so far with Osasuna all square in two of theirs 45 minutes in, so a Half Time Draw appeals for this intriguing encounter at Jose Zorrilla.

Sunday’s packed La Liga roster concludes at Benito Villamarin, with Betis and Getafe keen to kick on up the table after underwhelming starts to the campaign.

Both sides will feel that this is a game they can realistically win and we’re anticipating a frantic start, with Betis likely to press and Getafe seeking to hit the hosts on the break.

Early goals have been a feature in Getafe’s matches thus far with at least one scored in each before the 34 minute mark, so backing an Early Goal again makes sense here with Betis’ expensive attack likely cause problems but also leave plenty of gaps for the visitors to exploit.

Back our selections as an accumulator at 26/1!

Like the look of all our picks? You can back them all in an accumulator now at odds of 26/1!