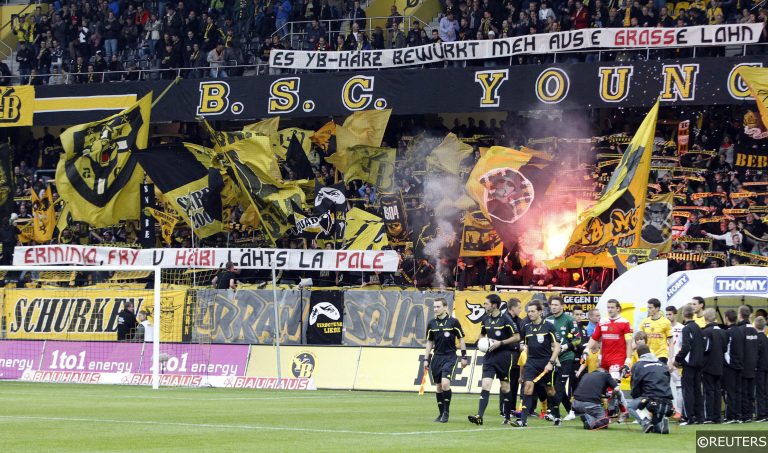 All fans love goals, but not all leagues are created equal. As great as the Premier League’s weekly drama is, it still doesn’t feature in the top 10 of Europe’s highest scoring leagues this season.

Across Europe there are plenty of divisions which average over three goals per game and you can read on for the top 10 list below.

While Luxembourg and Hungary’s top divisions may not pull you away from watching Super Sunday this weekend, the list could help you in your weekend accumulators. We’ve used the list to create a 54/1 Match Goals Mega acca which you can back within this article.

This list contains some of the usual suspects – we’ve always known that the Dutch second tier is the go-to league for goals. The same goals for the Eliteserien and Belgium’s top tier. However, the fact that the Scottish third tier is eighth in the list is a surprise. All but two sides in the league have hit at least 20 goals so far, making Scotland’s League One one to keep an eye on.

Serie A has long been going against the idea that it’s a dull, defensive league. Each of the last two seasons have averaged over three goals per game and it’s no different this time around. Cristiano Ronaldo may be gone, but the goals haven’t left Serie A.

The same can’t be said in Spain, with a disappointing 2.4 goals per match suggesting that Ronaldo and Lionel Messi leaving has made a bit of a dent. Having been pulled from the major broadcasters and with games failing to entertain its easy to see La Liga losing relevance in the UK if this continues.

Having looked over this weekend’s matches from the highest-scoring leagues we’ve picked out eight games which are worth a look. Together they combine to make a 54/1 accumulator which you can back below.

High-scoring games to watch this weekend

Leverkusen games have been great entertainment so far this season, with seven of their 11 Bundesliga outings seeing at least 3.5 goals scored. With a struggling Bochum side visiting this weekend, expect another high-scoring game. The visitors have conceded 2.5 goals per trip, so expect to see at least three here.

The top two in the Scottish third tier should put on a show on Saturday. All of Airdrie’s home matches this season have seen over 2.5 goals land, while Cove have scored at least three times in three of their last four starts.

Across Europe’s top seven leagues, no team can match PSV’s consistency in terms of high-scoring clashes. The Dutch side have seen at least three goals scored in 92% of their league games this term, while they host a Vitesse side who have scored in each of their last nine in the Eredivisie.

Viking have won five of their last six games and they’ve scored 2.3 goals per home game this term. Their matches in the league this term have averaged 3.6 goals per game and with Haugesund seeing over 2.5 in 69% of their Eliteserien matches over 2.5 goals looks good here.

AZ have seen over 2.5 goals in all of their home league games this term. With visitors NEC conceding 2.17 goals per away match we see another high-scoring clash in the Eredivisie. Each of NEC’s last four trips have seen both teams score too so expect at least three goals.

Salernitana vs Sampdoria (Serie A)

These two sides have conceded a combined 51 goals in Serie A this term and the two terrible defences on show are backed to struggle. Samp have seen over 2.5 goals in 83% of their league games while they’ve conceded three goals in five of their last seven starts.

Antwerp are flying high domestically having scored 1.86 goals per game on the road, but they struggle to keep clean sheets both home and away. Sint-Truiden have conceded in all of their home games this term, with both teams scoring in 86%. That should lead to more goals this weekend.

Servette have one of the worst defensive records in Europe’s highest-scoring league. They’ve shipped 2.15 goals per game this season but they’ve scored 1.7 per home game. Each of Grasshopper’s last 11 matches have seen both teams score so this game looks good for at least three goals too.