WATCH: AC Milan Perform The Haka Before Kick Off 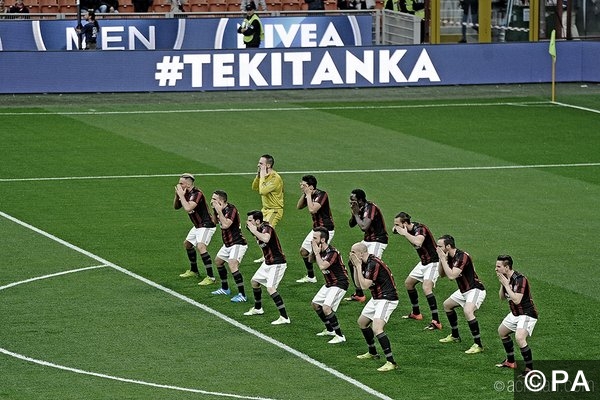 Since their glorious days in the Champions League with endless stars such as Seedorf, Nesta & Maldini playing among their ranks, AC Milan seem to be a shadow of the massive club they once were and they took things to another level before kick-off of their Serie A match against Carpi on Thursday night.

They actually performed the Haka. Yes, the Haka. The traditional ancestral ritual that the All Blacks rugby team from New Zealand usually perform before their games.

The Milan players had obviously been practicing this for quite some time as they all seemed to be in sync with one another whilst the Carpi players just stood together and watched on.

It was fairly bizarre considering the Haka is usually performed by the Maori people of New Zealand and AC Milan have precisely zero players from New Zealand in their squad.

If you haven’t seen it, then below you will find the video of the Milan players performing the Haka just a few yards away from their opponents Carpi and in front of what seems another very small crowd at the San Siro.

What are AC Milan doing this for? pic.twitter.com/PJFihD6p0M

After the entertaining pre-match, ironically the actual game was pretty boring and ended in a bore draw as sixth-placed Milan drew 0-0 to Carpi who are threatened with relegation in Serie A. Maybe the Haka had a negative effect on the Milan players after all?

It will be interesting to see if AC Milan perform the same routine before their next game away to Verona or perhaps their next home game versus Frosinone though we’re sure plenty of people will be hoping to not see it again.