When Does The NFL Season Start?

The 2015/2016 NFL regular season kicks off on Thursday 10th September with the Pittsburgh Steelers travelling to Gillette Stadium to face the New England Patriots! The first NFL Sunday will be Sunday 13th September and will feature 13 other games. We then have a double header of Monday Night Football on September 14th with the Philadelphia Eagles at Atlanta Falcons and then Minnesota Vikings at San Francisco 49ers to conclude week 1.

Below is the Sky Sports TV schedule with kick off times list in UK time! Which one are you looking forward to the most? 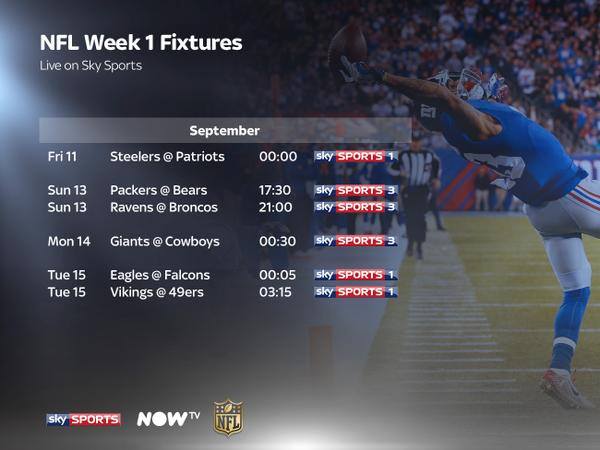 We strongly recommend watching NFL Red Zone for all fans, especially new ones who are trying to get into the game. They show all the highlights, big plays, touchdowns from all Sunday games in real time. For UK fans it’s like Soccer Saturday but with all the goals and highlights shown to you soon as they go in! It will make you fall in love with American Football and is completely advert free so there’s no waiting around for the next play to be shown!

We’ll have betting previews for every single regular season game which will include a tip for each game. We will also have a weekly accumulator, double and £10 to £1,000 rolling challenge! Be sure to keep your eyes on our Twitter feed because we may also have some in play tips for the games through out the season!

As well as our NFL coverage, this season we will be previewing the college football games on BT Sport/ESPN for UK fans! Our college experts will be providing accumulators on Friday, Saturday and Sunday nights when there’s a large amount of college action!