Who wins the NFC East? 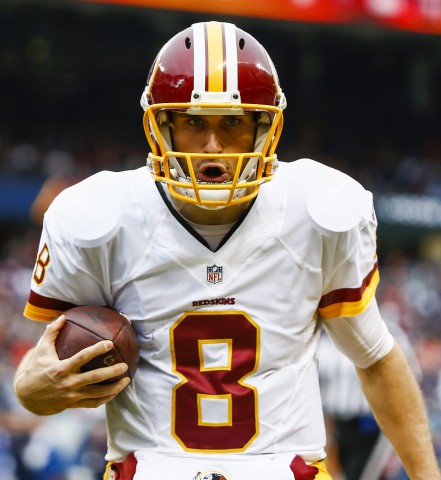 With three weeks to go in the 2015 NFL season, several playoff spots and division races are all but decided at this point in time. There will be juggling for wild card spots and potential playoff seeding as the season winds down but one of the biggest question that remains is who will emerge as the sole survivor of the NFC East to make the playoffs?

As it stands, three of the division’s four teams are tied with identical 6-7 records on the year as the Washington Redskins, New York Giants and Philadelphia Eagles are all trying to find some momentum to catapult them to the top spot. As poor as the Dallas Cowboys have been this season at 4-9, they sit just two games behind the leaders for the top spot. While it’s probably a safe bet that Dallas isn’t going to win the division without Tony Romo, it’s tough to call a favorite from the other three teams. Who has the edge as the season winds down for an unlikely and undeserving playoff spot? Let’s take a look at the contestants.

Washington currently owns the tie-breaker situation as they have a winning conference record while the Giants and Eagles are both sub-.500 in that category right now. One of the big issues for the Redskins is the fact that they have been terrible on the road this season; their win over the Bears in the Windy City last week snapped a nine game losing skid dating back to week 8 of last season away from FedEx Field. They still have to travel on the road twice to close out the season and both are divisional matchups that will go a long way to determining what happens.

The Redskins will have their work cut out for them this week against the Bills in their home finale. Buffalo sports the same record as Washington but that doesn’t do the Bills any good in the AFC playoff picture, especially playing in a division with New England. The Bills have a very good run game and Washington has been susceptible to stopping the run this season. LeSean McCoy is very familiar with the Redskins after spending his entire career with the Eagles prior to being dealt before this season. Throw in that the Bills have had Washington’s number and things may be tough for them here.

Washington beat the Eagles at home earlier this season and was knocked off by Dallas on Monday night a couple weeks ago as they failed to stop the Cowboys offense in the dying seconds. The Redskins have gotten good production from Kirk Cousins at quarterback but the run game has left much to be desired as Alfred Morris and Matt Jones have failed to do much of anything to move the chains. Washington could just as easily go 0-3 in these final three games as they could win two of three. In the end, I see Washington losing to Buffalo and Philadelphia while beating Dallas in the season finale to finish 7-9.

Philadelphia was on the scrap heap a couple weeks ago sitting at 4-7 on the year as the calendar flipped to December. Instead, two weeks later, they’re coming off a road win over New England and a home win over Buffalo to thrust them right back into the mix. Now, things weren’t exactly pretty by any stretch of the imagination for the Eagles in those games: they needed a blocked punt returned for a score, a punt return for a TD and a pick six to upend the Patriots.

To beat the Bills, the Eagles blew a 10 point third quarter lead, had a drive end on a red zone interception and needed a catch and run by Zach Ertz on a pick play to set up the winning field goal. Factor in a fumbled punt by Buffalo to set up a field goal and the Eagles have caught some breaks of late. Philadelphia can’t keep relying on teams finding bizarre ways to beat themselves so they can rack up wins.

Philadelphia’s best ally for this week’s game against the Cardinals would normally be the weather but Mother Nature hasn’t cooperated with the wind, ice and snow that Eagles fans are used to seeing. While the weather will be colder than it has been of late, the forecast still is calling for game time temperatures around 45 degrees but it will be sunny without much in the way of wind. That won’t help the Eagles much as Carson Palmer and the Cardinals have had great success throwing the ball this season. Philadelphia’s pass defense has been shaky and will have their work cut out trying to cover Larry Fitzgerald, Michael Floyd and John Brown.

Philadelphia’s week 16 matchup with Washington could possibly be an eliminator game that could knock out the loser. The key for the Eagles will be keeping pass rushers off Sam Bradford, who is extremely brittle: Philadelphia does not want to go into a must win situation with Mark Sanchez running the show. The run game has three talented backs in Ryan Mathews, DeMarco Murray and Darren Sproles but only one ball to go around. Murray’s attitude issues could prove costly for him in the long run; the team can ill afford to be derailed by his issues.

The Eagles are a tough team to figure out but if their defense and special teams aren’t contributing, it’s an uphill battle for the boys from the City of Brotherly Love. Philadelphia will have a tough time with the Cardinals this week: while they may beat the Redskins in week 16, it’s going to be a tough matchup beating the Giants on the road in week 17. Philadelphia could easily finish 1-2 and end up 7-9, though they could pull an upset in one of their other two and end up at .500 on the year.

The Giants are going to have a tough closing stretch so if they find a way to win the division, they’ll have earned it. Carolina is unbeaten on the year at 13-0 and has one of the league’s best defenses, which will test a battered Giants offensive line. Odell Beckham Jr. will be shadowed by Josh Norman in one of the best individual matchups we’ll see all year. If the Giants miss the playoffs, they’ll lament all those close losses they piled up earlier in the season: New York lost by 1 to Dallas and New England, by three to the Jets in a game they led by 10 in the fourth quarter, by three to the Saints in overtime, by four to the Falcons and by six to Washington. They are 1-6 in games decided by six points or less.

New York simply has been unable to deliver in crunch time when games were on the line and hanging in the balance. If the offense took the lead, the defense failed; if the defense held to give the offense a chance, Eli Manning and company couldn’t get it done. That’s put Tom Coughlin on the hot seat and it’s not all his fault. Coughlin didn’t tell Jason Pierre-Paul to blow part of his hand off with fireworks this summer. He didn’t ask for the rash of injuries on the offensive line or in the receiving corps or to tight end Larry Donnell. No one projected Victor Cruz wouldn’t play a down this season. Still, none of it matters.

In the end, the judgment that’s passed about a coach, or a team, is based on the performance between the lines. No one wants to hear the excuses about why things didn’t go the way anyone expected. No one wants to listen about how if x, y or z had been different, the team would have been in a better position than they are right now. That’s what Coughlin faces: on paper, the Giants have the best talent of the three teams chasing the division. They have a quarterback with two Super Bowl rings, a receiver that makes the ridiculous catches look routine and several other good pieces. What they don’t have is a killer instinct, that ability to come up with key plays when the team needs them the most. It’s shown through time and again in close games this season.

The Giants will be in trouble against Carolina, even playing at home. It’s not going to be easy on the road in Minnesota next week as the Vikings are battling for a playoff spot themselves and need wins. Facing the Eagles in week 17 will be a challenge because the Giants have struggled with Philadelphia. New York will likely end up 7-9 because it’s hard to see them winning two of those three contests.

When push comes to shove, you could easily say none of these teams deserve to win. This could be another time where a 7-9 team wins the division and gets to host a playoff game against a team that wins 10 or 11 games but is a wild card. In the end, you have to give Washington the slimmest of margins in this race. The Redskins have the winning conference record; they should be 3-3 in the division and holds the conference record tie-breaker when things are all said and done. The Redskins could sneak into the playoffs as the NFC East champs and can be backed at 5/6 with bet365.