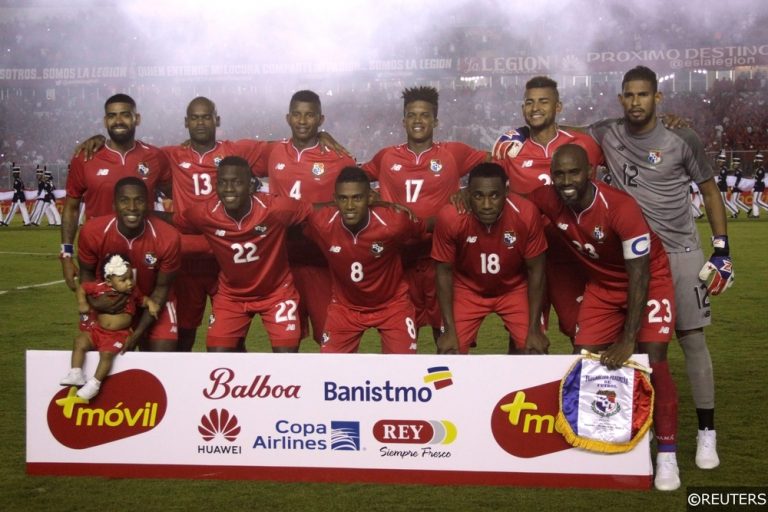 After securing qualification for the first time in their history, Panama arrive just happy to be a part of the world’s biggest party. A team of few household names and no egos, Los Canaleros will be looking to use the sheer grit and determination that got them here once again when the action begins.

Priced as long as 2000/1 to lift the trophy, it’s fairly clear to see the bookmakers aren’t giving the debutants a prayer. Placed in a group with England, Belgium and Tunisia, the Panamanians will do well to avoid defeat in any of their outings and hold very little hope of making it into the last 16, something reflected in the 12/1 odds on offer for them to do so. In the following article, we profile them men looking to make waves in Russia and take a look at what challenge awaits Gareth Southgate and co.

By the end of the tournament, you can be fairly certain that Panama’s starting XIs fielded will be amongst the oldest on average in the competition. Many of the team are set to retire after the World Cup, including the likes of Blas Perez, Luis Tejada, Felipe Baloy and Roman Torres. meaning it’s a squad which includes a heap of experience, mixed with some younger understudies ready to take the baton after the competition’s conclusion.

In between the sticks is the tried and tested Jaime Penedo of Dinamo Bucuresti. Aged 36 and possessing 130 caps, Penedo brings a wealth of experience and is another man who could call time on his international career after a Russian swansong, with his future unknown as of now. Backing up the veteran stopper, two domestic keepers in the form of 32 year old Jose Calderon and 27 year old Alex Rodriguez take their seats on the plane.

Defensively, regular viewers of the MLS will see plenty of recognisable names, with 5 of the 8 men selected in the department playing their football in the US. Amongst that group is star player Roman Torres, whose goal in the final qualifying match with Costa Rica earned the side their place in the competition, and he’s joined by Adolfo Machado, Felipe Baloy and Luis Ovalle in Hernan Gomez’s trusted back line. With that combination wracking up a combined total age of 131 years, Panama’s defence has a huge amount of experience and will be key to any success the side has.

In the centre of the park, the ever-present Gabriel Gomez and Anibal Godoy provide a steely, protective block for the back four with their workmanlike attributes and with 231 caps between them, provide yet more experience to the starting XI. In wider areas, meanwhile, Panama possess some real legs to compensate for other, slow areas of the pitch and the pace and flair of Edgar Barcenas and Alberto Quintero cannot be underestimated should the team manage to get them on the ball enough. Additionally, Armando Cooper provides excellent backup for Gomez and Godoy and we can expect to see a fair amount of the 97 cap Universidad de Chile man despite him looking likely to start the competition on the bench.

Up front you’ll find legendary striker Blas Perez, arguably the best player Panama have ever produced and he’s likely to be partnered by Huachipato forward Gabriel Torres to bring some pace alongside Perez’s knowhow, with the veteran’’s running power having declined in his twilight years. Luis Tejada, another one of Panama’s greatest productions will be a handy option off the bench and the younger duo of Gabriel Torres and Abdiel Arroyo complete the 23 man delegation jetting off to Russia.

Already a Seattle Sounders legend, Roman Torres wrote his name into Panamanian history books with his last gasp winner to send the nation into raptures. Torres is the team’s key figure and with there likely to be plenty of defending to do, his performances will be crucial in any successful stab at writing yet more history.

Whilst not possessing blistering pace, Torres is a physically imposing enforcer who few will be able to get the better of in any potential 50/50, Aerially dominant, Torres also adds an attacking threat at set pieces, but his main duty will be to hold the back line together under sustained periods of pressure.

One to Watch: Alberto Quintero

With the squad’s younger members unlikely to see a massive amount of game time, most attention will likely be drawn to Alberto Quintero, who few will have heard of going into the World Cup.

Aged 30, Quintero hasn’t really had much success at club level but always catches the eye when playing for his country and was regularly linked with bigger clubs off the back of national team showings in his younger years. Although not much of a goal threat, Quintero has the pace and trickery to trouble any defence and his main responsibility in Russia will be using those attributes to relieve pressure and launch counter attacks.

Younger players than Quintero are featured in our potential breakout stars this summer in Russia feature.

Although possibly tempted to switch to a 5 man defence given the quality of opposition, Hernan Gomez prefers to operate with a 4-4-2 and we expect him to stick to that throughout the World Cup. Nonetheless, viewers can still expect Panama to sit deep with two banks of 4, with keeping things tight and looking to steal a goal on the break undoubtedly the objective. Panama’s likely line-up for the opener against Belgium is as follows:

Realistically Panama’s main achievement was in even qualifying and whilst they certainly aren’t travelling to make up the numbers, they do face a tall order given the stature of the teams they’ll face. Nonetheless, packed with experience and excellent team spirit, you’d be foolish to entirely rule the World Cups’ big underdog from making a few splashes, so England best beware.