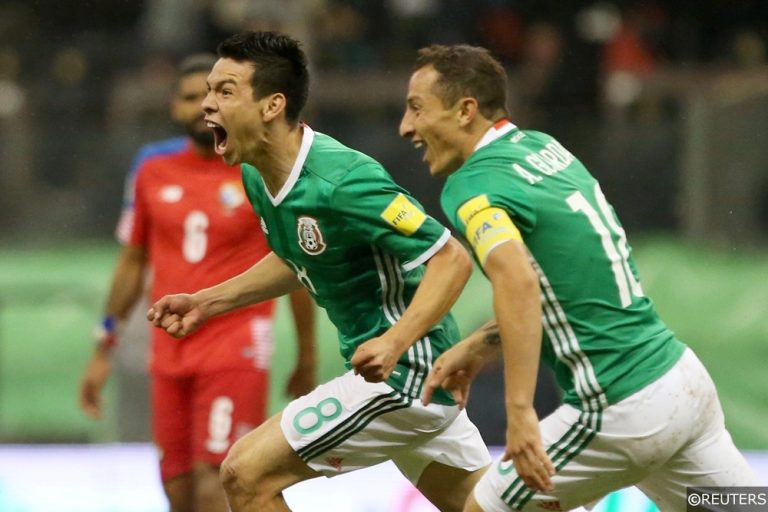 This summer’s World Cup 2018 in Russia promises to be a month-long festival of football. The tournament has fans bubbling with excitement for many reasons. One of the most fascinating aspects of any World Cup Finals is watching a relative unknown make the transition to household name within the space of a few games.

We have seen players use the platform the World Cup provides to announce themselves as genuine football superstars, often earning big-money moves off the back of their performances at the tournament.

At the 2014 World Cup in Brazil, James Rodriguez produced a string of mesmerizing displays for Colombia, finishing as the tournament’s top scorer with 6 goals. Rodriguez was subsequently snapped up by Real Madrid less than ten days after the World Cup finished. The Spaniards parted with £63m to prise the attacking midfielder away from Monaco, making him the 4th most expensive player in the history of the game.

In Russia next month, a whole host of young players will hope to make a similar impact. Let’s take a closer look at some of the potential break out stars of World Cup 2018.

Read More: World Cup 2018 by Numbers: The Best and Worst Performers in Qualifying

Blessed with blistering pace and a tibia tangling dribbling ability, twenty two year old Mexican winger Hirving Lozano is one of the most exciting young players competing at this summer’s World Cup.

Lozano moved to PSV in the Eredivisie from Mexico’s Pachuca last summer, costing the newly crowned Dutch champions just €8m. The signing proved to be an inspired piece of business and Lozano scored seventeen times in twenty nine league appearances for the Boeren this season.

Lozano has already netted seven times in twenty five games for his country, four of which were scored in Mexico’s World Cup qualification games. Lozano is central to the Mexicans chances of progressing to the latter stages of the tournament in Russia and if he can shine this summer, he may find himself on the move again.

Hirving Lozano on his 12th goal of the season so far pic.twitter.com/fFla93fw7W

“Bentancur is like a Uruguayan Pogba. He is a young guy, but he is very talented. He is a midfielder with excellent technique, good runs and someone who is very intelligent. He is physically strong and good in the air. His characteristics are very much like those of Pogba.”- Boca Juniors Manager Barros Schelotto

Rodrigo Bentancur is still only feeling his way into top level club football, but the twenty year old attacking midfielder has already forced himself into the reckoning for Uruguay’s senior team.

In stark contrast to the aggressive, physical midfield players produced by Uruguay in recent years, Bentancur is more paint brush than hammer.  Uruguayan Manger Óscar Tabárez blooded the youngster during the teams’ World Cup Qualifiers, making use of Bentancur’s versatility and technical acumen.

Bentancur has only seen bits and pieces of action for Juventus this season, though the Old Lady have big plans for the talented midfielder who is expected to feature more often next year. An impressive World Cup for dark horses Uruguay would go a long way to helping him break into the first team at Juve in 2018/19.

“I have never seen an 18-year-old who has so much class and desire. The boy will be one of the world’s best!” – Bochum sporting director Jens Todt in 2014

Having already agreed to join Bayern Munich from Schalke, there won’t be a scramble for Leon Goretzka signature this summer. However, it will be intriguing to see if the twenty three year old can live up to his burgeoning reputation at the World Cup next month.

Joachim Low is a huge admirer of the marauding midfielder and even with the competition for a place in Germany’s team extremely stiff, Goretzka is expected to feature. Goretzka will be vying for a spot alongside Toni Kroos, with Sami Khedira and Ilkay Gundogan his main rivals for a starting berth, though it’s testament to Gortezka’s ability that he is considered a genuine alternative to that trio of big names.

Goretzka was the star of Germany’s Confederations Cup victory last year, scoring three times en route to the Final. The Bochum born all-rounder brings bite and energy to the heart of the Die Mannschaf middle and he is ready to establish himself as a key component in Low’s team. 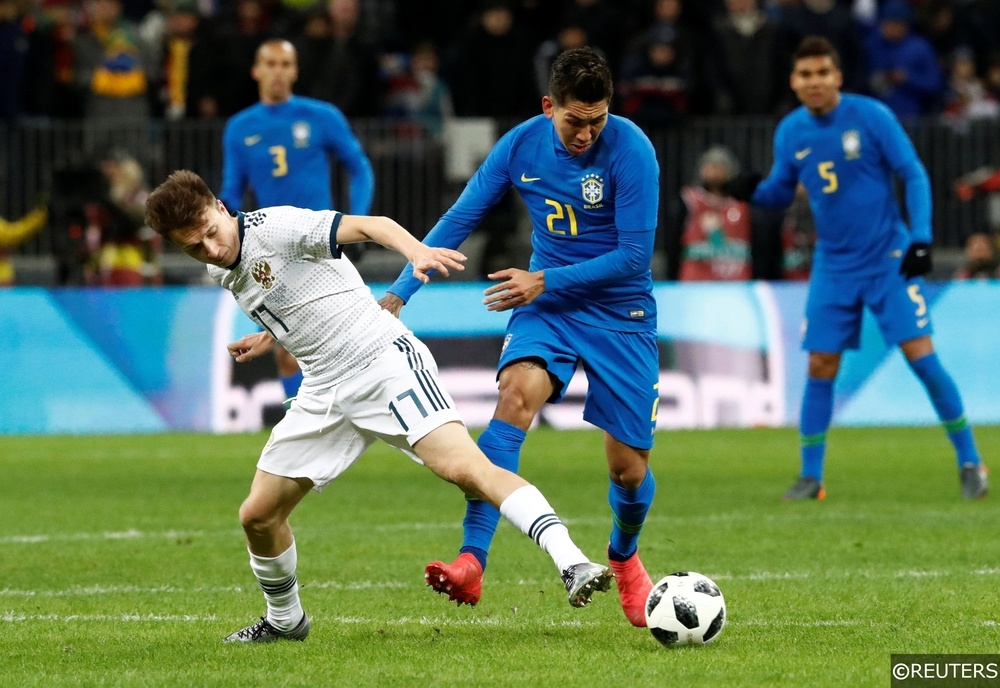 “He needs to leave. As far as I know, there are offers from Premier League clubs.” – Agent Alexander Manyakov

21 year old Aleksandr Golovin carries the hopes of an entire nation into the 2018 World Cup this summer. The CSKA Moscow midfielder is the poster boy of Russian football and even though he has collected just seventeen caps for his country, he has already established himself as one of the most talented and influential members of their squad.

Golovin performed well for his club CSKA Moscow in both the Champions and Europa League this season, when he was tasked with providing the majority of the team’s creative passing from central areas.

The Kaltan born schemer can use both feet equally well and is an expert at finding pockets of space between the lines. With so few stars in the Russian squad, it will be interesting to see if Golovin can cope under the immense weight of expectation this summer.

“Guedes has won over the fans even though it’s a short time. He’s become an idol”  – El Pais journalist Salva Folgado

Twenty one year old winger Gonçalo Guedes has been dazzling onlookers at the Mestalla more than the Spanish sun this season. The lightning quick wide man is on loan at Valencia from French giants Paris St. Germain, though he seems keen to make the permanent switch to Spain.

Although he predominantly operates from the left hand side, Guedes can play right across the line in any forward position. He excels in taking on and beating players in one and one situations and he has racked up nine assist in La Liga this season, a total bettered by just three players in the division.

With seven caps and one goal at full international level, Guedes is starting to force his way into Portugal’s starting eleven, having represented his country at every level from U15’s up. The Benfica academy graduate has repeatedly been linked with a move to the Premier League, with Man Utd, Man City and Chelsea in the hunt for his signature.

“I wouldn’t know how much he’s worth, but €70m would be too little. We already turned that down for him last summer.”  – Lazio sporting director Igli Tare

Sergej Milinković-Savić is one of the hottest properties in Europe right now and the languid twenty two year old midfielder is set to be at the centre of a bidding war this summer while he ponders over which of the continent’s biggest clubs he wants to play for yet.

The Lazio star is so revered in his Serbian homeland, that Slavoljub Muslin was axed as national team manager for not picking Milinković-Savić, despite guiding Serbia to a place at the World Cup in 2018. New Manager Mladen Krstajic was quick to involve the midfielder after his appointment and Milinković-Savić is set to be the first name on the team sheet this summer.

Milinković-Savić has scored eleven goals in thirty one Serie A appearances this season, leading the charge in Lazio’s attempts to qualify for next year’s Champions League.  Amazingly, Milinković-Savić has only appeared twice for Serbia at senior level, though he is certain to bolster that number considerably.

“Arthur is a great player and the club have followed him for a while. We know he’s a good player, that he has a profile which can adapt to our style of play and we’re keeping an eye on him because he is young and he has a great future ahead of him”  – Barcelona Manager Ernesto Valverde

Officially still a Gremio player, midfield dynamo Arthur has already penned a deal that will see him move to footballing behemoth Barcelona this summer. Barca decided to move early for the twenty one year old, nipping in ahead of the competition before Arthur’s reputation and value spiralled at the World Cup.

Rated as the most complete young player in Brazil, Arthur combines clever passing with exceptional vision, seeing routes to team mates where others only see brick walls. His style of play has been likened to Barcelona legend Xavi, which suggests that Arthur is likely to excel in the surroundings of the Nou Camp.

Last September, Arthur was called up to the Brazil senior squad for the first time for their qualification games against Bolivia and Chile. Arthur has yet to win his first cap however, though the youngster is still capable of making an immediate impact at full international level if given the opportunity by Brazil manager Tite.