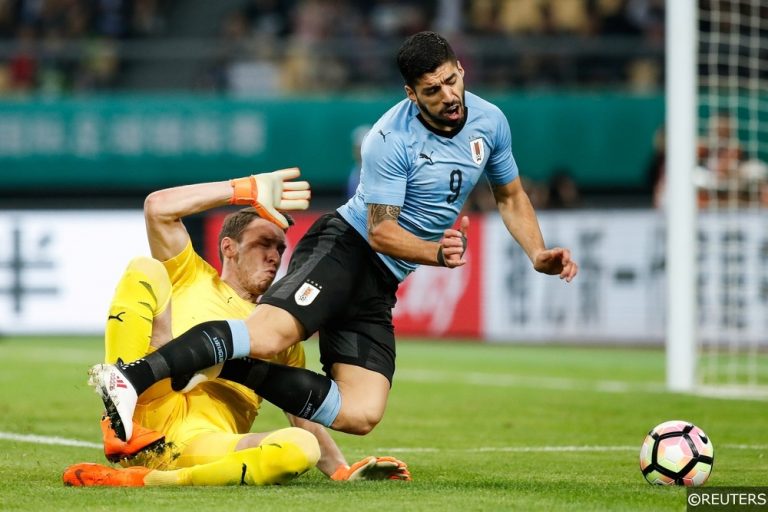 After impressively finishing second in South American qualifying, Uruguay travel to Russia as one of the World Cup’s dark horses. Placed in a group with Russia, Saudi Arabia and Egypt, La Celeste are at least expected to make it into the last 16 but will surely harbour hopes of going further than the very stage they crashed out in back in 2014.

Available at odds as long as 33/1 to lift the Jules Rimet trophy, the bookmakers don’t rate Oscar Tabarez’s troops as having any real hope of claiming glory. Nonetheless, with a promising crop of youngsters emerging and plenty of established stars present, confidence back home is high, with fans dreaming of another deep run after a 2010 semi-final appearance.

The immediate feel to the squad is that it has a nice blend of youth and experience. 13 of the 26 were a part of the team that competed in Brazil and the spine of the team remains fairly similar, but there’s also recognition of the excellent production line, with plenty of exciting names phased in for aging, old campaigners.

In between the sticks, Fernando Muslera is the undisputed number one once again, whilst back up goalkeepers Martin Silva and Martin Campana provide more than adequate cover in the event that the Galatasaray stopper suffers injury or suspension.

Defensively, the Atletico Madrid pairing of Diego Godin and Jose Maria Gimenez will start in the middle, forming one of the strongest centre back partnerships in the competition. The first choice fullbacks are far less established and with several of those selected equally comfortable on either side, Tabarez has plenty of options as regards completing his usual back four. Notable absentees from the squad include former regular Jorge Fucile, as well as young ball-playing centre back Mauricio Lemos, one of the only young prospects not be given the call, thanks to a poor season at club level.

It’s in midfield areas where things begin to get really interesting, and where most of the cuts are going to have to be made. Whilst creativity in the middle of the park has been a hot topic in England since Gareth Southgate named his squad, it certainly hasn’t in Uruguay, with the team possessing an abundance of technically gifted midfielders, most of which of an age to form part of the team for years to come. It’s Matias Vecino. Rodrigo Bentancur and Nahitan Nandez who who are expected to line up in behind Cruzeiro man Giorgian de Arrascaeta in Russia, but Tabarez has such a wealth of options that he has several combinations to pick from. Competing against talent so strong that there’s not even room for PSV attacking midfielder Gaston Pereiro, whilst the likes of Nicolas Lodeiro and Gaston Ramirez may well have to be two of the three men cut, signifying the completion of the baton change in this department.

The Uruguayan front two really need no introduction and backed up by young star Maxi Gomez and red-hot Cristhian Stuani, it’s an attack that ranks amongst the most potent of all the travelling nations. Edinson Cavani and Luis Suarez have a staggering 92 national team goals between them and with 38 La Liga goals available off the bench in the form of Gomez and Stuani, the side have the potential to run riot over June and July if given the correct service.

Arriving off the back of 28 Ligue 1 goals in just 32 matches, Edinson Cavani will be looking to write himself into Uruguayan folklore in what is probably his last ever World Cup. The Danubio graduate is amongst the front runners to claim the golden boot, alongside partner Suarez and if he continues the form he’s been showing at club level, that doesn’t look all that bad of a bet at prices as big as 28/1.

Cavani has just about everything you want in a striker and is an excellent foil for Suarez. Physically strong and technically gifted, the 31 year old is almost impossible to tame and will be keen to build on his 2 goals in the competition so far, something that looks very likely after notching 10 times in 15 qualifiers. 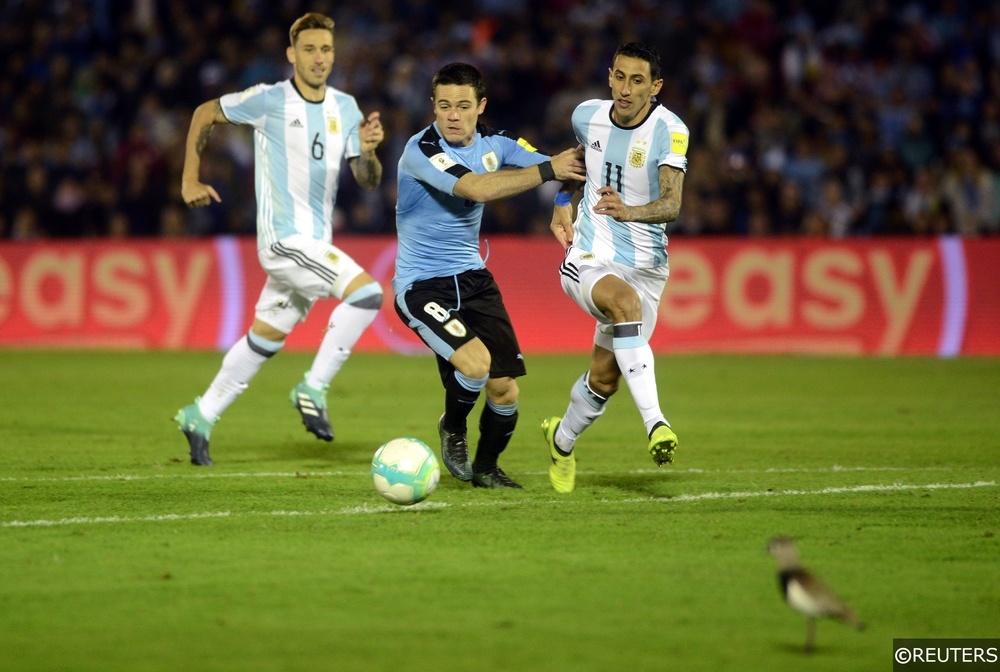 Whilst most of the new midfield guard play their football in Italy, Boca midfielder Nahitan Nandez comes into the tournament relatively unknown to people who don’t watch South American football regularly. Those that do will attest that Nandez is a big talent and whilst he’s certainly settled at the Argentine champions, a strong summer could invite offers that would be impossible to turn down.

Not long having turned 22, Nandez has already racked up over 100 appearances for Penarol and Boca and is a key cog in the latter’s success. The Punta-del Este born man is as complete a midfielder as they come, combative. technically polished and excellent in transition, he’ll be sure to catch the viewers’ attention in Russia.

Other players to keep an eye on can be found in our potential breakout stars this summer in Russia feature.

It feels as though there’s a shift about to emerge in Uruguay’s style of play thanks to the new options available. Previous years have seen Tabarez’s troops play in industrial fashion, looking to remain compact and hit on the break with Cavani and Suarez. Now with greater ability to circulate the ball, we should see a more protagonist Uruguayan eleven, with the following as possible starters for the opening game with Egypt.

Household names mixed with some of the potential stars of tomorrow, Los Charrúas are a team well worth tuning into when the action gets underway, but it remains to be seen whether wise old heads can guide their apprentices through on the world’s biggest stage. Whatever the case; it should be a fun watch. How do you rate Uruguay’s chances?