Newcastle United defended valiantly last weekend when they made the trip to Old Trafford, and largely thanks to the heroics of Fabricio Coloccini they came away with a point.

This 0-0 draw was a fairly exciting affair for a goalless match, but it was nothing compared to Arsenal’s goalless thriller.

They played Liverpool in the Monday evening fixture and it is still baffling us that there wasn’t a goal in this game.

The woodwork was hit 3 times in this match and both Cech and Mignolet produced some incredible saves to keep their teams’ clean sheet. Overall, the 2 teams had a combined 25 shots on goal, yet neither managed to break the deadlock.

This draw made it 4 points from Arsenal’s first 3 games, although they have performed a lot better in the last 2 weeks than they did in their opening day defeat to West Ham.

Newcastle have collected 2 points from their start to the Premier League season. This points tally doesn’t really reflect their performance, as they have looked like a different team to the one we saw struggle last campaign.

They started it with a 2-2 draw against Southampton, with new boy Wijnaldum getting on the scoresheet on his debut. They lost against a sharp Swansea side and then fought hard to take a point away from Old Trafford.

Their 4-1 win over Northampton in the Capital One Cup in midweek may have been an expected win, but the 4 goal haul will undoubtedly boost their confidence.

But the history isn’t on Newcastle’s side. Arsenal have won all of the last 6 meetings between these sides, which include a couple of absolute thrillers. They won 7-3 back in 2012, and their last 3 games have all ended in over 2.5 goals. 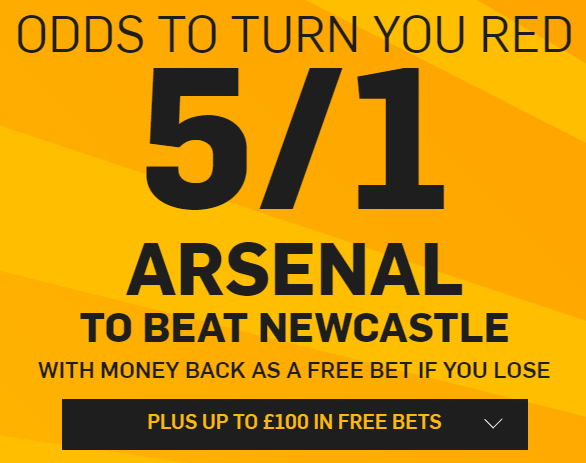