City can make history in Portugal

Both Manchester City and Chelsea stand ready to be crowned kings of the continent ahead of Saturday evening’s Champions League final in Portugal, though the Citizens could be worth backing to land club football’s biggest prize ahead of their English counterparts.

UCL final debutants City have never been closer to landing the trophy they have craved the most and while a brace of recent defeats to Chelsea might suggest that Thomas Tuchel holds the key to cracking Pep Guardiola’s tactical riddles, the Blues’ victories in league and cup should have little bearing on Saturday’s showpiece showdown.

Guardiola fielded much-changed City teams in both their FA Cup semi-final and Premier League losses to Chelsea in April and May, though they were still a terribly disguised Sergio Aguero Panenka penalty away from ousting the Blues in the clubs’ most recent skirmish.

With all of their big guns restored to the XI, City should be a more formidable prospect and their impeccable run of 11 wins and one draw from 12 European fixtures this season suggests they are finally ready to achieve Champions League glory.

Pep Guardiola has triumphed in a staggering 14 of his 15 major finals and the highly-decorated coach can become a three-time winner of the Champions League on Saturday. 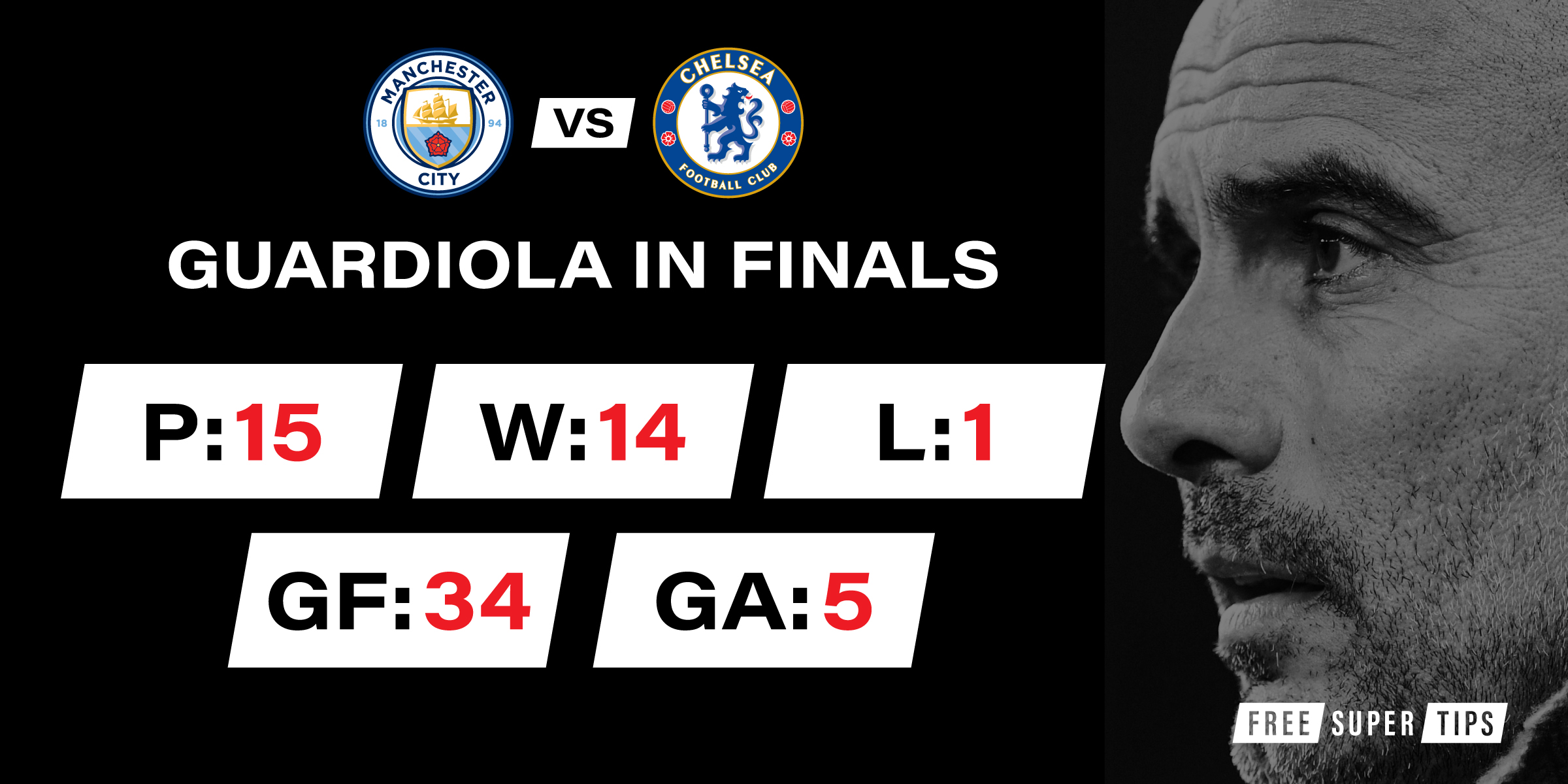 Mahrez the man for the big occasion

Riyad Mahrez didn’t see a single minute of action for Man City in the Citizens’ relatively recent pair of reverses to Chelsea, though the Algerian winger should be one of the first names on the teamsheet in Porto.

The 30-year-old was City’s match-defining hero in their double-legged triumph over PSG in the semi-finals when he notched three times over two games to help fire the Manchester giants to glory against the Parisians.

Mahrez also showed nerves of steel to match his nose for the big occasion in the previous round when he converted a crucial penalty kick in Germany against Borussia Dortmund.

The wide attacker’s ability to beat his marker in one-on-one situations and to conjure up moments of individual brilliance make him an outstanding candidate in the anytime goalscorer market on Saturday.

Mahrez’s potency was a prime factor in our decision to include him in our 47/1 Champions League final bet builder for tomorrow’s crucial contest. 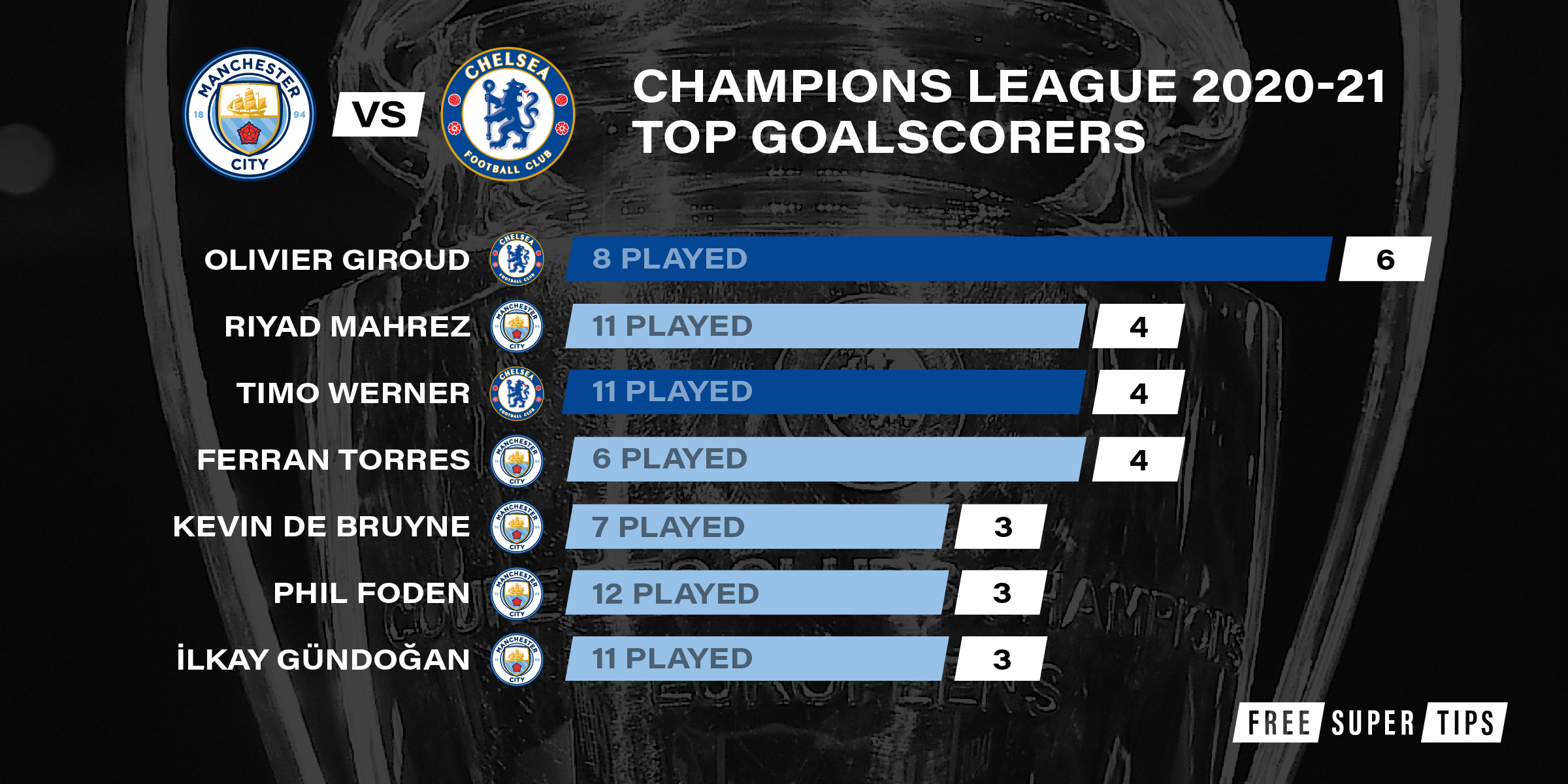 Game of fine margins in Porto?

11 of the last 20 Champions League finals produced over 2.5 goals, though a contest of finer margins is anticipated when Manchester City and Chelsea slug it out for silverware at the Estádio Do Dragão.

Thomas Tuchel has made solid defensive foundations a key part of his Chelsea blueprint since his appointment in January and under 2.5 goals have been scored in 23 of the Blues’ last 29 fixtures as a result.

Man City meanwhile, have kept eight clean sheets in 12 Champions League fixtures this term and with FWA Player of the Year Ruben Dias a rock at centre-half alongside the revitalised John Stones, the Citizens’ rearguard should be tough to breach again on Saturday.

With so much at stake and both sets of players keen to avoid making destiny-altering mistakes, a chess-like battle could develop in Portugal, so back both defences to come to the fore and under 2.5 goals to be scored.

While Chelsea’s defensive improvements under Tuchel have been notable, the Blues’ output in the final third has been less than impressive.

Anchorman Jorginho – who padded his numbers with penalties – was the club’s leading scorer in the Premier League with just seven goals – and Chelsea have notched one or fewer goals 15 times since Tuchel took the reins.

Chelsea’s football fell flat in the final exchanges of their domestic campaign where they failed to score in two of their last four matches, including their FA Cup final defeat to Leicester and with reliable goal-getters rare beasts in their ranks, they could suffer a similar fate in Portugal.

With that considered, a 1-0 victory for Manchester City is recommended as a correct score prediction. 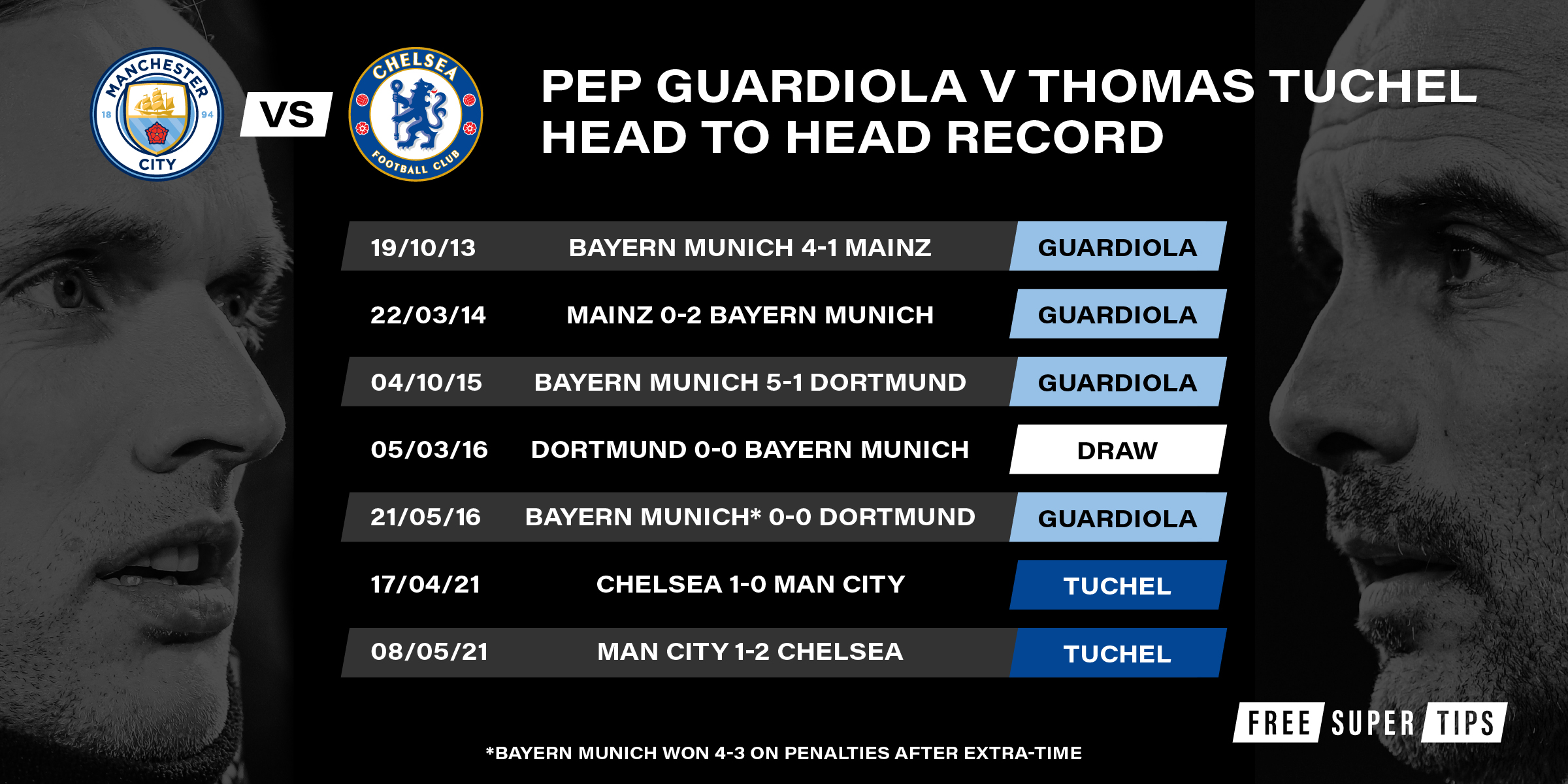 One issue that both of these teams share is the lack of an out-and-out centre-forward. Pep Guardiola transformed City’s fortunes this term by switching to a false-nine system, while Timo Werner’s input for Chelsea is largely measured in assists.

However, both sides have midfield talents who more than make up for their lack of a number nine. Kevin de Bruyne leads the way for shots per game in this season’s Champions League, averaging one shot on target per match in this competition. Meanwhile, Mason Mount has mustered at least one effort on target in each of his last five appearances for Chelsea.

We expect both to get a shot on target in Porto on Saturday and they feature in our Champions League final bet builder tip, which you can back below.

Manchester City have a clean bill of health for Saturday’s Champions League final and Pep Guardiola has decisions to make in several key areas.

Fit again midfield pair Ilkay Gundogan and Kevin de Bruyne should start, though expect the Citizens to kick-off without a recognised striker in tow.

Kyle Walker should get the nod ahead of Joao Cancelo at right back, while there should also be room for Phil Foden and Riyad Mahrez further up the pitch. 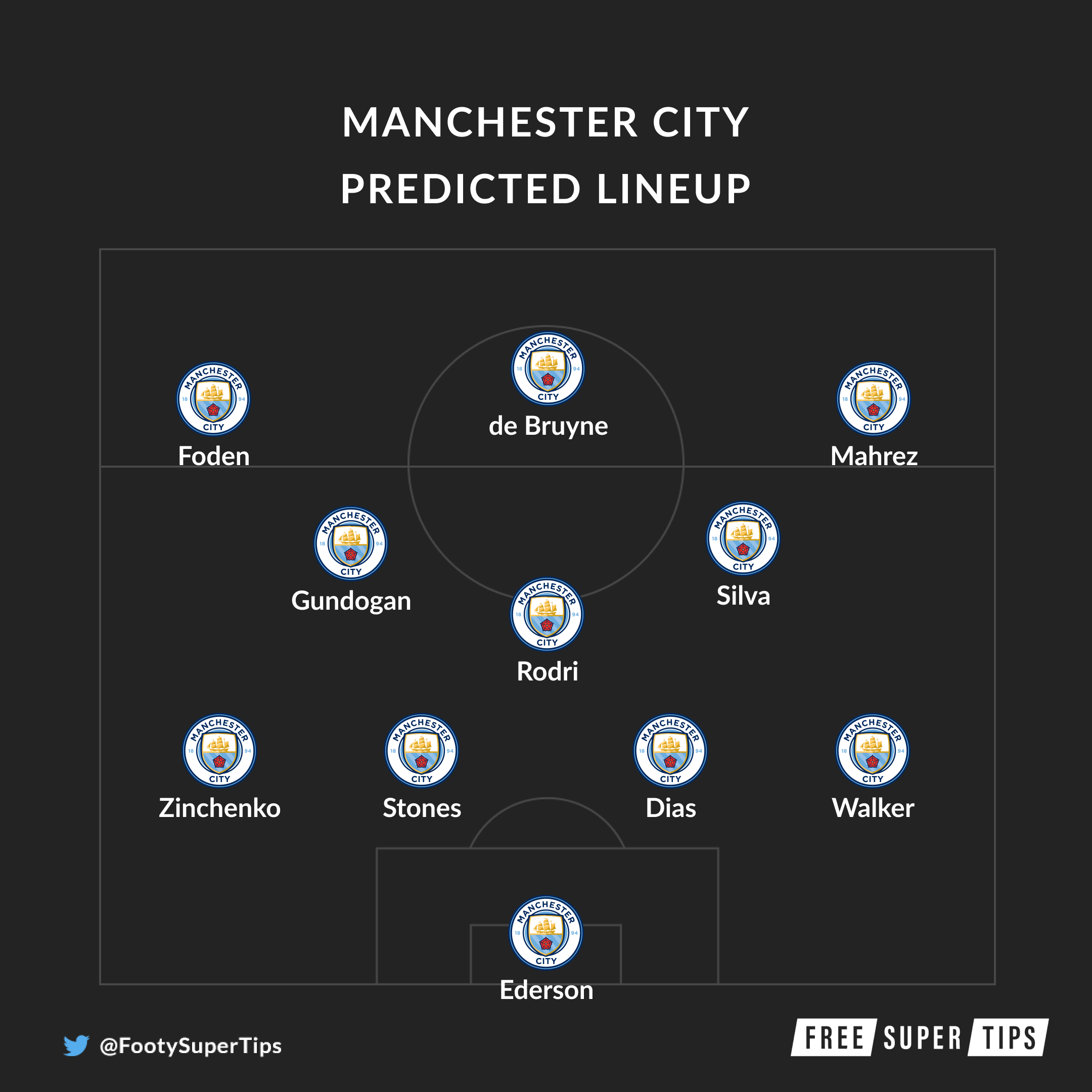 Thomas Tuchel is sweating over the fitness of keeper Edouard Mendy and key midfielder N’Golo Knate, though both players will expect to feature on Saturday.

Ben Chilwell should start ahead of Marcos Alonso on the left flank, while Timo Werner and Hakim Ziyech will hope to claim a berth in Chelsea’s fluid front three.

Cesar Azpilicueta, Thiago Silva and Antonio Rudiger will make up an experienced back three for the Blues. 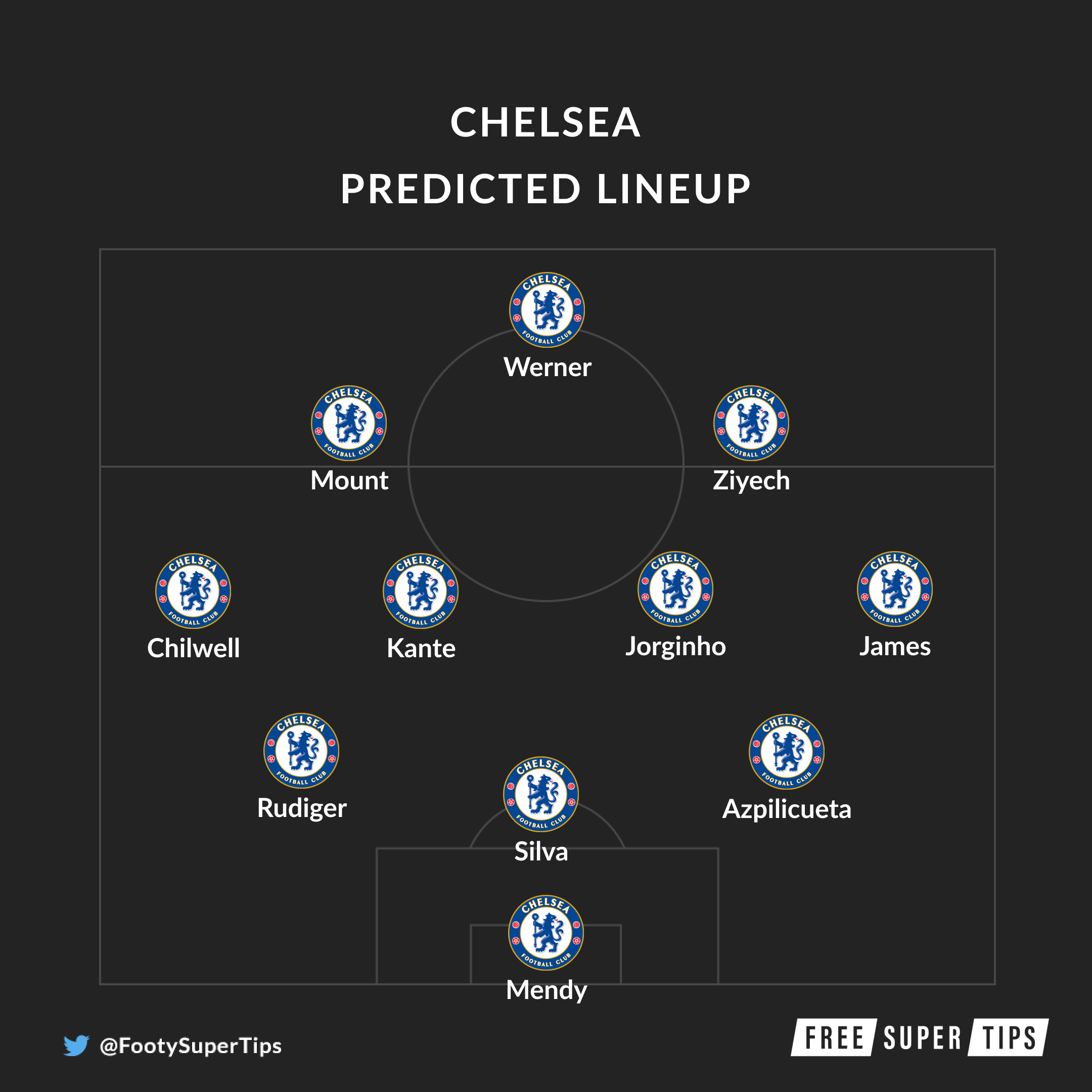