The Netherlands got their Euro 2016 qualifiers off to a bad start when they lost away to the Czech Republic. It was a tough start to the campaign, and a loss wasn’t entirely unexpected, and the Dutch fears were temporarily alleviated when they comfortably beat Kazakhstan in the second match.

But a shock defeat away to Iceland saw them drop another three points, and another two followed when they failed to beat Turkey on home soil in the fourth game.

This puts them in a disappointing 3rd position in Group A, not a position they expected to be in when they were touted as odds on favourites for the top of Group A.

The inconsistency of this Dutch team will really worry the fans of the national team, and the extent of this inconsistency is highlighted by two recent friendly fixtures. First, they beat Spain 2-0 at home, and this was followed in their very next match with a 4-3 defeat in Amsterdam to the United States.

Iceland are the fairytale team of this qualifying campaign, shockingly leading Group A after 6 games played after their victory over the Czech Republic back in June.

This puts their record for the group at five wins and one loss in their 6 games. Wins against the likes of Netherlands and Czech Republic were beyond what any Icelandic fan would dare dream of.

This puts them in a very good position to qualify for Euro 2016, and a positive result against Netherlands on Thursday would put them in prime position to take the top spot with all of their remaining games easily winnable.

I think it would be foolish to write off the away side in this match. Iceland have historically achieved some surprising results against the powerhouses of Europe, and considering the Netherlands disappointing record recently I think odds of 12/5 for an Iceland Win or Draw Double Chance offer a lot of value as the bookies overestimate the Dutchmen’s chances. 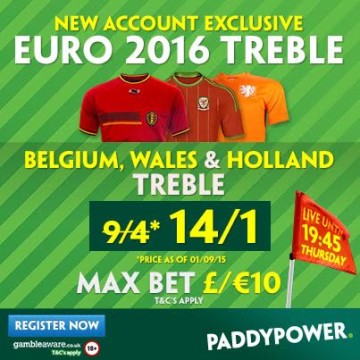