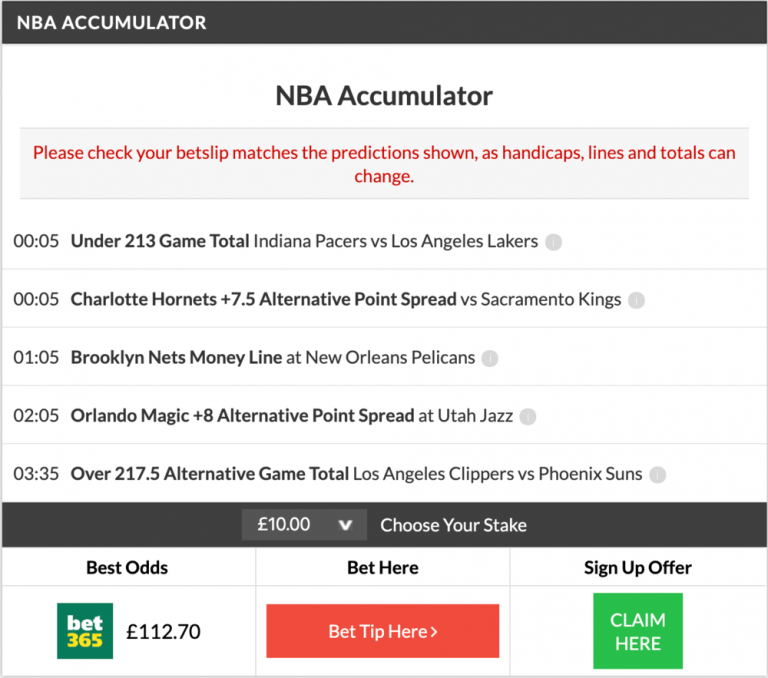 Just two days after our 12/1 NHL Accumulator & Double winner, our tipsters have delivered yet another Acca winner!

This time around we landed a 10/1 NBA Accumulator and here is how it unfolded:

Our first winner on the Accumulator came in the Indiana Pacers vs LA Lakers game where we tipped Under 213 pts to be scored. With the Lakers missing their starting center Anthony Davis it was to be expected that they wouldn’t score a ton of points in this one. They were held to just 102 with Indiana scoring 105 for a total of 207 pts landing our first tips of the Acca!

The Charlotte Hornets came out as surprise winners against the Sacramento Kings 110-102. Six players scored in double figures for the Hornets who swept the season series against the Kings 2-0. Our +7.5 Handicap bet landed with ease!

Despite being without Kyrie Irving and Kevin Durant, the Brooklyn Nets still managed to defeat the New Orleans Pelicans 108-101. Spencer Dinwiddie scored 31 pts as the Nets won their 2nd in a row and handed the Pelicans their 13th loss in a row.

Our 4th tip on the Acca was the hardest one as the Orlando Magic took on the Utah Jazz in Salt Lake City. We went with Orlando Magic +8 Handicap here and luck was definitely on our side as the Jazz won by 7 pts here and our handicap landed just barely!

And finally, we went for Over 217.5 Total Points in the Clippers vs Suns game. LA had very little problems here as they were up by 10 at half time and finished the game with a 21 point win, but more importantly the two teams combined for 219 pts and landed our final tip on the Acca!!