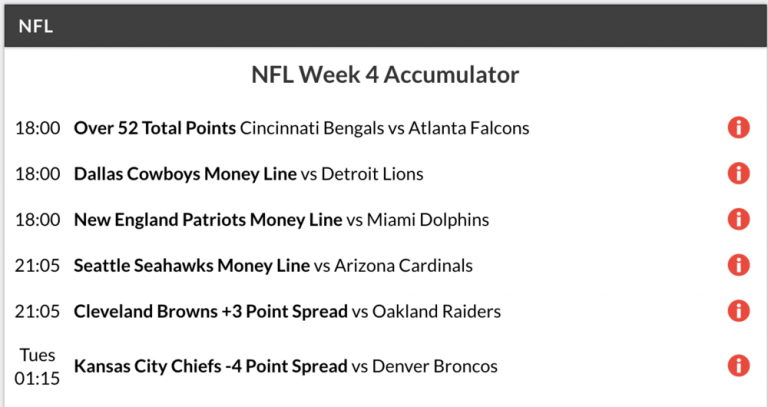 The last 48 hours have been mental here at FST!

It all started on Sunday night when we landed a 14/1 MLB Acca + Double and continued yesterday where an incredible three Accumulators came in!!

We followed it up with another Acca winner and this time it was our weekend NFL Acca which extended to Monday night.

The night started in Atlanta where the Falcons hosted the Cincinnati Bengals. It was always going to be a high scoring game and our NFL analyst made a great prediction of Over 52 pts to be scored here. The game finished 37:36 in favour of the visiting Bengals and we were off to a winning start!

The 2nd game of the Acca was also a tight one between the Dallas Cowboys and Detroit Lions. A solid 2nd and 3rd quarter turned out to be the difference in this one as Dallas edged out Detroit 26-24.

The New England Patriots didn’t have any problems at home against the Miami Dolphins. After winning the opening quarter 3-0, the Patriots cruised to a 24-0 lead after the 2nd quarter and the game was pretty much over. They scored two more touchdowns in the 2nd half and it finished 38-7 Patriots.

Another away win for us happened in the 4th game between the Arizona Cardinals and Seattle Seahawks. In a game full of turnarounds, the Seahawks managed to pull this one out with a late field goal in the 4th quarter which gave them a 20-17 edge and they were able to hold on until the end.

The game between the Raiders and Browns went into OT after it finished 42-42 in regulation. The Raiders scored a field goal in the OT which gave them a 45-42 win, but since we had a +3 Point Spread on the Browns, this leg of the Acca was void which meant a slightly lower price on the Acca.

In the final game of the Acca, we needed the Kansas City Chiefs to win by 4 points and they did exactly that! The Denver Broncos were leading for 3/4 of the game, but then a big comeback in the 4th which they won 14-3 gave the Chiefs a well deserved 27-23 win and landed our Acca!!

The new NFL season is very young and we will be having predictions for each game every weekend! Make sure you are following our FREE NFL PREDICTIONS page of the FST website!

Shoutout to Jordan who was kind enough to send in his winning betslip to us on twitter: