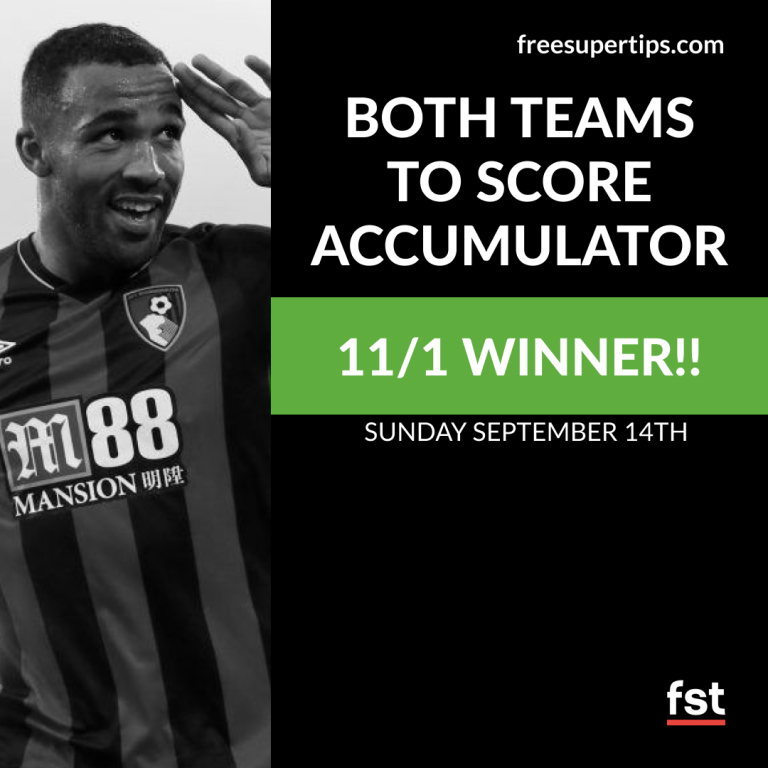 What a weekend it has been at FootySuperTips, with the international break over our football analysts have been producing the goods again to land us three accumulator winners over the last three days!

Our fivefold match goals accumulator got underway early in the day with Feyenoord hosting ADO Den Haag in the Eredivisie, given Feyenoord’s poor start to this season Den Haag will have been hoping for a result but those hopes were dashed early with Feyenoord getting 3 goals before the 33rd minute. This meant we needed Den Haag to find the confidence needed to find one goal, that finally came in the 77th minute thankfully through an own goal which saw us overcome the early kick off and move onto leg two.

The 2nd and 3rd leg both got underway at 2pm with Spal facing Lazio and Bournemouth hosting Everton in the early Super Sunday fixture. We was once again gifted early goals with Lazio taking the lead in the 17th minute through Immobile whilst Bournemouth’s clincial striker Wilson also put them ahead with a 23rd minute goal. This left over 70 minutes for us to find 2 goals to land those legs and we weren’t left waiting long with Everton levelling the game just before half time through Calvert-Lewin whilst Spal began their impressive comeback with a 63rd minute goal that saw us move onto our final two legs.

Watford hosted Arsenal in the second Super Sunday fixture where we needed both sides to score to see us onto our final leg, Pierre-Emerick Aubameyang once again showed his class to gift Arsenal the lead in the 21st minute which left us needing one Watford goal. They peppered the Arsenal goal throughout the half time but were unable to hit the back of the net leaving us 45 minutes to keep the accumulator alive but Watford didn’t need that with Cleverley reviving their hopes in the 53rd minute and taking us onto the final leg which got underway at 8pm.

Monaco and Marseille faced off in the late Ligue 1 kick off and whilst so far luck had been on our side with early goals, it happened to be once again with Monaco going ahead through Ben Yedder in the 17th minute! 73 minutes remained in the game but we remained confident of a Marseille goal and that confidence was rewarded as Benedetto got the vital away goal we needed which started their comeback in the 38th minute to land our 3rd accumulator of the weekend!
Free Football Predictions

Anothe day another success.
Thanks FST.
Keeping it fun as always. pic.twitter.com/bzctW4xXYr