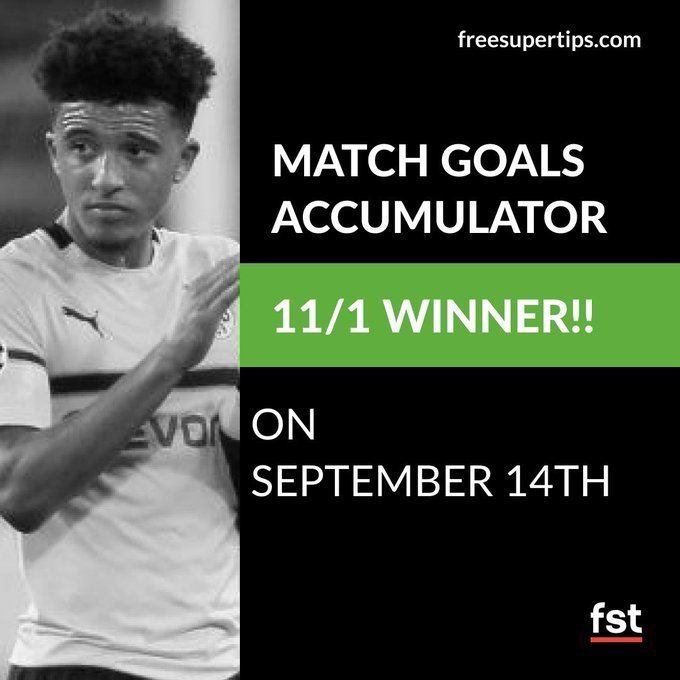 Another day another winner! Our football analysts have been working their magic once again, landing their second accumulator in 2 days since the return to club football after the international break, making it a total of three accumulator winners in a week!

CHECK IT OUT HERE  https://t.co/yg0HY9dAOp

Our fivefold match goals accumulator began with 3 games in the German Bundesliga, namely Union Berlin vs Werder Bremen, Borussia Dortmund vs Bayer Leverkusen and Augsburg vs Eintracht Frankfurt. We needed Over 2.5 goals to land in all 5 games for the accumulator to land.

The first goals of the accumulator came at the home of Union Berlin, as visitors Bremen took an early lead through ex-Everton midfielder Davy Klaassen on 5 minutes. The lead didn’t last long though, as Andersson converted from the penalty spot on 14 minutes. The first half ended 1-1, but in the second half the visitors secured all 3 points as Fullkrug found the net to land the first leg of the acca. Meanwhile, Dortmund commenced their dismantling of Leverkusen in the 28th minute as Paco Alcacer gave the hosts the lead. The half ended with just the 1 goal, but the 2nd half was much more lively, as Reus (x2) and Guerreiro netted to win 4-0. The third and final game in the Bundesliga got off to the slowest start, but still saw 2 first half goals as Richter (35′) and Niederlechner (43′) scored for Augsburg. Frankfurt grabbed one back in the 73rd minute through Paciencia, but that was not enough to secure any points, however it was enough to land leg 3 of the accumulator!

The final two legs of the accumulator came from the EFL, specifically QPR vs Luton in the Championship, as well as Swindon vs Macclesfield in the League Two. QPR wasted absolutely no time getting on the scoreboard, as Eze gave the hosts a lead inside 3 minutes. Nahki Wells found the net twice in just 8 minutes later in the half to give the hosts a 3 goal cushion, but Luton’s Cornick grabbed one back on 36 minutes to go into the break at 3-1. Collins made it 3-2 shortly after half time, but Luton could not find the net again and the match ended 3-2 to QPR. Finally over at The County Ground, Swindon took the lead on 37 minutes via Anderson, before Eoin Doyle doubled the hosts lead just before half time. The Irishman doubled his tally on 76 minutes to make it 3-0 to Swindon, the way the game ended, landing our 11/1 Match Goals Accumulator!