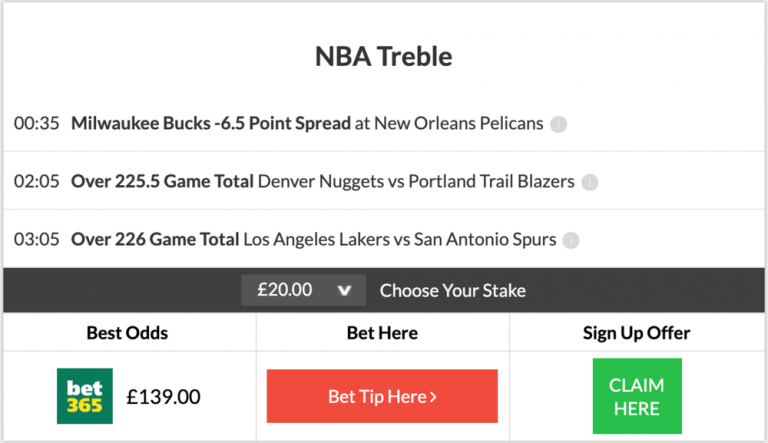 The winner just keep on coming here at the start of February!

Last night we added to that a 11/2 NBA Treble winner! Our NBA tipster has been in form this year as he landed 23 of 32 Doubles so far as well!

It was a clash of the two biggest up and coming stars in the NBA as Zion Williamson’s Pelicans hosted Giannis Antetokounmpo and his Milwaukee Bucks. We went for a -6,5 Handicap on the Bucks here and they delivered. The key to the win was a dominant 3rd quarter in which they scored 42 past the Pelicans and eventually won the game 120-108.

The Nuggets dominated the Portland Trail Blazers in the 2nd game of our Treble. We went with Over 225.5 Total Points here and the bet landed by half a point! Denver won the game 127-99 for a total of 226 pts. It was their 20th home win this season, a key factor in the win was them limiting Damian Lillard to just 21 pts.

And finally we had Over 226 Total Points in the Lakers vs Spurs match-up. Lebron James was once again dominant as he scored 36 pts on 20 shots from the field to go along with 9 assists. The Spurs got 28 pts from DeRozan, but it wasn’t enough for them as they lost by 27 here. 129-102 was the final score which landed our 3rd and final tip on the Treble!

Don’t worry if you missed out on last night’s winner, there’ll be plenty of other opportunities to land a winner. We strive to bring you the very best daily NBA betting tips, and you can follow along by bookmarking our NBA PREDICTIONS page.