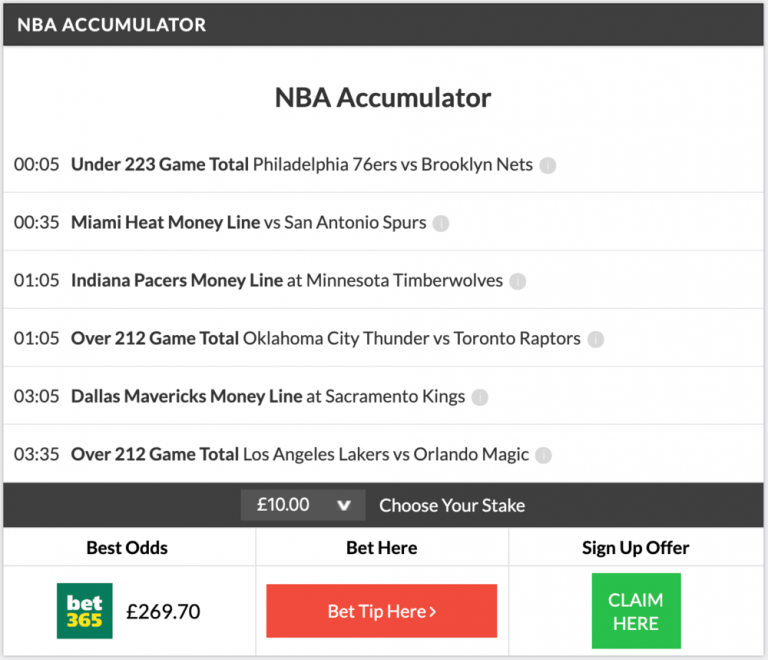 A strong start to the week continued here at FST as we have yet another Accumulator winner!

Originally tipped at 25/1, our NBA Accumulator has landed at reduced odds of 13/1 last night.

That makes it four accumulator winners since Monday.

Originally priced at 26/1, lands at reduced odds because of 1 void leg.

The Accumulator started with Philadelphia taking on Brooklyn and we went for Under 223 pts in this one. The game finished 117-106 in favour of the Sixers which meant a total of 223 pts were scored resulting in a void leg.

Next up we had the Miami heat at home to beat the San Antonio Spurs. The Heat overcame a big night from Derozan who had 30 pts as they ran out 6 point winners in this one, thanks to a 33-point effort from Nunn. Miami is now 18-1 at home this season.

The Indiana Pacers recorded their third straight win at Minnesota last night. They won 104-99, with two of their players scoring 20+ points. Minnesota, who lost their third game in a row, has now slipped to 6-13 in home games.

Our tip in the OKC Thunder vs Toronto Raptors game was never in doubt. We went with Over 212 total pts and the two teams finished with a combined 251 pts scored. The Raptors recorded yet another impressive away win as all five of their starters plus two bench players scored in double figures. It was their 26th win on the season.

Luka Doncic continued his stellar play with 25 pts, 15 rebounds and 17 assists as he lead the Dallas Mavericks to their 14th away win on the season vs the Sacramento Kings. It was a 3rd win in a row for the Mavs, while the Kings dropped to 15-26 on the season.

And finally, the LA Lakers hosted the Orlando Magic in the final game of our Acca. In a surprising win for the Magic, the two teams combined for 237 pts, landing our tip of Over 212 pts with ease!