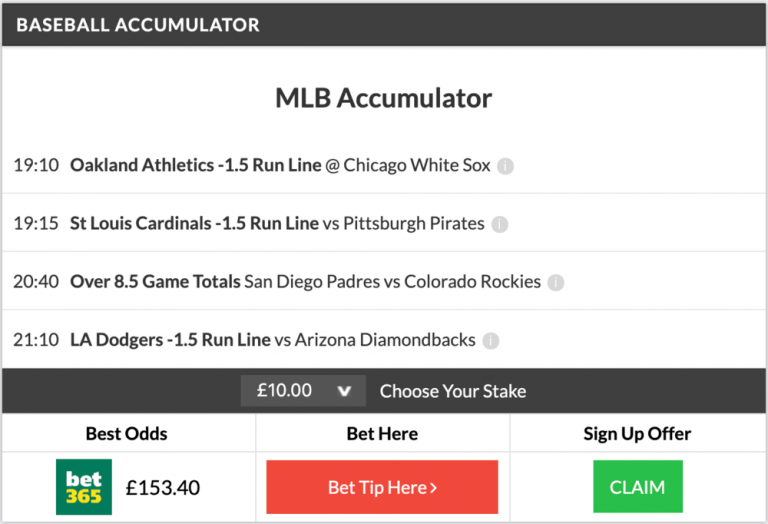 A fantastic start to the new Premier League season continues here at FST!

After landing a cool 10/1 BTTS & Win Double on Friday, we followed it up with another two winners on Sunday night!

Our baseball expert landed a 14/1 Accumulator which was followed up by a 7/1 Overnight Football winner in the MLS!

The Oakland Athletics got us off to a winning start with a 2:0 victory over the Chicago White Sox. Both runs were scored in the 4th inning and luckily for us Oakland was able to hold on to get the first win of our Acca.

It was an intense game between the St. Louis Cardinals and Pittsburgh Pirates. The two teams exchanged leads early on, but it was the Cardinals who found the breakthrough in the 7th inning which they won 5:0. That was followed up with two more runs in the 8th inning to give them a 3 run lead. The Pirates pulled one back in the 9th, but that was all she wrote as the Cardinals won by 2 runs here.

It was not an ideal start in the 3rd game between the Padres and Rockies as the two teams only scored 2 runs in the first 5 innings. However, they showed signs of life in the 6th as the Rockies won that inning 4:0. Five more runs were scored the rest of the way and our Over 8.5 Run Total tip landed with ease.

And finally the LA Dodgers dominated the Arizona Diamondbacks at home. It was already 6:0 after the 3rd inning and 8:0 after the 5th. Arizona never really stood a chance here and we could start celebrating yet another MLB Acca winner!

We needed Philadelphia Union to win and Both Teams to Score in the first game of our MLS Treble. It was 1:1 at the break which meant a Philadelphia goal gets us off to a winning start. The breakthrough came in the 78th minute through J. Elliott who put Union ahead 2:1 and they were able to hold on to the lead. With the win Philadelphia remains on top of the Eastern Conference.

DC United beat Zlatan Ibrahimović’s LA Galaxy in the 2nd game of our treble. Similarly to the first game, the home team took the lead, the visitors levelled the score in the 48th minute. It was L. Rodriguez who scored the winning goal for DC United in the 73rd minute, it is LA Galaxy’s third loss in a row.

And finally a six goal thriller between LAFC and the NY Red Bulls brought us yet another winner! An exciting game featured 4 goals in the first half as the two teams went into the break levelled at 2:2. Carlos Vela and E. Segura made sure our bet would land with two goals in the 2nd half which gave the home team a 4:2 lead and more importantly landed our LAFC -1 Handicap bet here!

@FootySuperTips nice we surprise this morning. Cheers for the tip pic.twitter.com/EuY8Rbv1FP