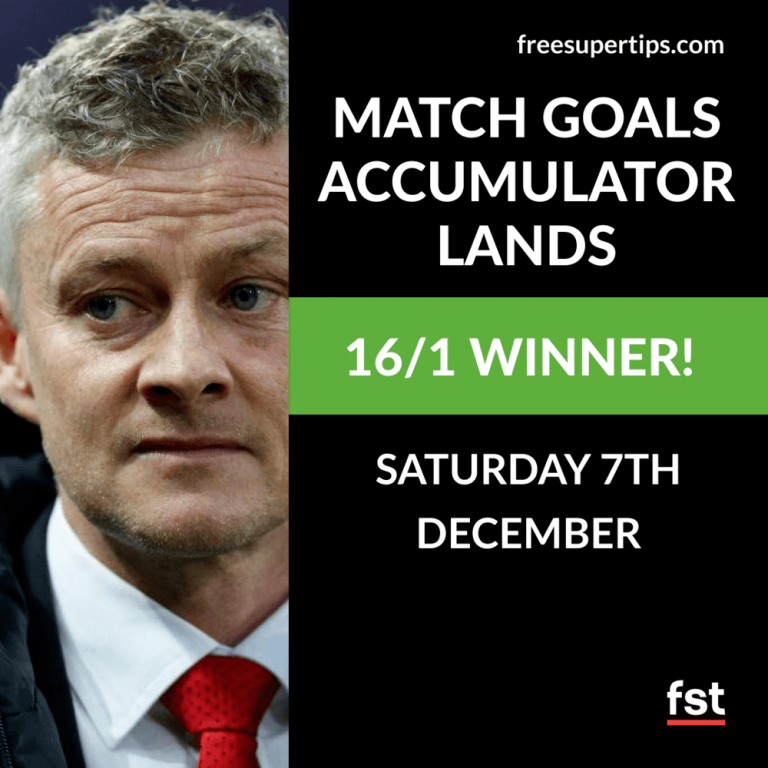 What a start to December it’s been for the football analysts over at FST! After landing  a 16/1 BTTS & Win Double on Monday and a 47/1 Anytime Goalscorer Accumulator on Wednesday, we followed it up with a 25/1 Overnight Accumulator and 8/1 Both Teams to Score Accumulator on Thursday, before landing a 16/1 Match Goals Accumulator on Saturday! That’s five accumulators in a week!

Here’s how our latest winner went down:

The accumulator started off over in Germany, as Monchengladbach took on Bayern Munich and Augsburg took on Mainz. As with all the games in this accumulator, we needed 3 or more goals to be scored for the leg to land. Mainz gave us the first goal of the accumulator as Oztunali opened the scoring on 15 minutes. Richter levelled the scoring for Augsburg four minutes from half time, and so the game went into the break 1-1. It took until the 65th minute, but finally Augsburg won a penalty, which Niederlechner duly dispatched to make it 2-1, which is the way the game ended, landing the first leg. Over at Borussia Park, it was a much slower start to the game. There were no goals at all in the first half, but finally 4 minutes into the second half, Ivan Perisic gave Bayern the lead. Their lead didn’t last long though, as Bensebaini made it 1-1 on the hour mark. It looked like that would be the game ended, but we were saved once more by a penalty, which Bensebaini coolly slotted home to give ‘Gladbach the 2-1 win and sending us to the 3rd leg.

The next three legs of the accumulator all came from the English lower leagues. In particular, the games were Fulham vs Bristol City and Hull v Stoke in the Championship, as well as Portsmouth vs Peterborough. Over at the KCOM Stoke got off to a flying start as Sam Vokes gave the visitors the lead on 7 minutes. Hull struggled to get into the game and it took them until the 2nd half to equalise, and they did so through none other than goal machine Jared Bowen 4 minutes after the break. 7 minutes later he doubled his tally and gave Hull the 2-1 lead, which is the way the game ended. Over in League One, Peterborough got off to a similarly quick start as Toney gave them the lead on 10 minutes. Brown levelled the scoring for Pompey 16 minutes later, and the sides went into the break level at 11. Harrison gave the hosts the lead early in the 2nd half, before Posh equalised through Mo Eisa on 72 minutes. The game ended 2-2. At Craven Cottage, Bristol City got off to a great start as Brownhill gave the away side the lead after 26 minutes. They doubled their lead 15 minutes from time through Diedhiou, before Kamara grabbed a consolation goal 4 minutes from time, sending us on to the last leg of our accumulator.

Our final leg was none other than the Manchester Derby. Manchester United got off to an electric start, and eventually their pressure paid off as Rashford won a penalty after 20 minutes, which he pulled himself up to take himself, and netted confidently to give the away side the unlikely lead. Just 6 minutes later Anthony Martial compounded the misery for Man City as United went 2-0 before the half hour mark. A rock solid defensive display from Solskjaer’s men nearly saw them take away a clean sheet and ruin our accumulator, but finally Pep’s men grabbed a goal back from a Mahrez corner, that Otamendi headed home, which was not enough for any points, but did land our 16/1 Match Goals Accumulator!

Be sure to bookmark our Free Football Tips page for predictions on all 2019/20 Premier League games and much much more!