17/1 Both Teams to Score Accumulator Wins!

Yet another BTTS Acca lands! That’s the 3rd time we’ve landed this bet in April alone! Sunday’s both teams to score accumulator came in at 17/1 and continues our fantastic month so far! This takes our month total to FOUR accumulator wins after our 34/1 Win Accumulator and our 19/1 and 13/1 BTTS Accumulators earlier in the month!

The acca started at Hampden Park wtih the Old Firm derby. The bet got off to a flying start with Kenny Miller smashing home after just 16 minutes after some poor Celtic defending. We had to wait a bit longer for Celtic to get their goal, which came early on in the 2nd half thanks to a header from Danish Centre Back Erik Sviatchenko.

The next 3 games all got off to fantastic starts with Firmino tapping in after a parried save from Sturridge’s back-heeled attempt on 41 minutes. Almost simultaneously, the first goals of both of our Italian games landed too. First up was Gonzalo Rodriguez of Fiorentina, who headed home from Milan Badelj’s cross after just 10 minutes. At the quarter hour mark, Frosinone netted their first of the game thanks to Adriano Russo who volleyed home from a corner after some poor defending from Hellas Verona. Early on in the 2nd half, both Italian games wrapped up their legs of the acca with Domenico Berardi netting after 56 minutes for Sassuolo and Matteo Bianchetti redirecting Giampaolo Pazzini’s header into the roof of the net on 64 minutes.

However the accumulator looked doomed for failure as the scoreboard in the Premier League fixture between Bournemouth and Liverpool read 0-2 after 90 minutes of play. That was until the hero of the hour, Norwegian international Joshua King, chested down Andrew Surman’s ball before volleying past Liverpool’s debutant keeper Danny Ward to bring us within 2 goals of landing the accumulator.

All our hopes now lay on the two London based sides providing the goods. The first half of the game saw Alexis Sanchez lob Palace keeper Wayne Hennessey with a delightful header from Danny Welbeck’s equally brilliant chipped through ball in the 45th minute. This just left us with Palace needing 1 goal in the 2nd half. They took their time, but finally on 82 minutes, Congolese forward Yannick Bolasie salvaged a point for the away side and completed our BTTS Accumulator with a magnificent individual goal which ended with a low driven shot from outside the box squirming past Petr Cech at his near post. 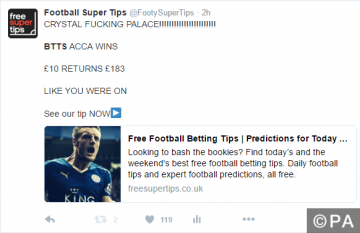 As usual, so many of our followers backed the accumulator so when the final goal came in we were flooded with winning bets. It’s always great to see our followers bashing the bookies and pocketing a huge profit! Check out some of the winners that were sent in to us on Twitter:

If you want to follow our both teams to score and other accumulators then head over to our free football betting tips page and join in the booms and do some of your own bookie bashing!