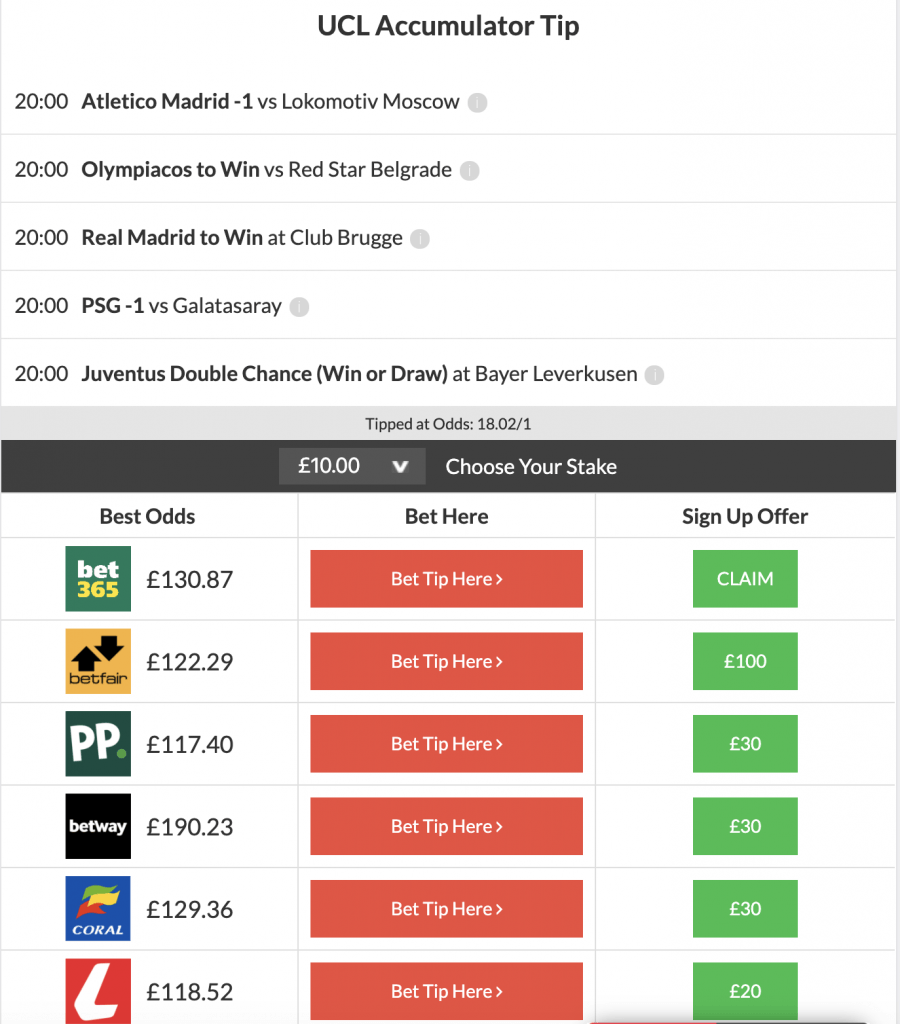 After successfully landing 6 Accumulators last week, our football tipsters are back on track with yet another winner!

We closed out the Champions League Group Stage with a tasty 18/1 Accumulator which included five games!

Our first match of the night was in Madrid where Atletico hosted Lokomotiv Moscow. We went with a -1 Handicap bet on the home team and things got off to a rough start. Kieran Trippier missed a penalty in the 2nd minute, but we didn’t lose faith in Atletico getting the job done. They were given yet another penalty in the 17th minute which was converted by Joao Felix for a 1-0 lead, which was the score at the break. The dominance continued in the 2nd half and Atletico were rewarded with another goal in the 54th minute through Felipe. In total they had 23 shots on goal compared to just 3 by the visitors from Russia. That was the final score and we were 1/1 on our Acca!

Next up we had Olympiacos to win against Red Star Belgrade, in a match which would decide the winner of 3rd place in the group. Luckily for us the visitors missed a golden opportunity in the 43rd minute as Tomane failed to convert a penalty. The score was still locked at 0-0 heading towards the final 5 minutes, but then the home team were also rewarded a penalty which they were able to convert with just 3 minutes to go. No more goals were scored and it was another winning tip on our Acca!

Real Madrid had a somewhat easy night at Club Brugge with a 3-1 victory. Everything was decided in this group even before this match kicked off, so the two teams didn’t show much effort in the first half and no goals were scored. Madrid found the breakthrough in the 53rd through Rodrygo, but only 2 mins later it was 1-1. Junior Vinicius scored a well rounded team goal in the 64th to put Madrid 2-1 ahead and Luka Modrić capped off the victory with a goal in the 91st minute.

PSG didn’t have any issues at home against Galatasaray. Our -1 Handicao bet landed with easy as they crushed them 5-0. All four of their strikers scored a goal in this one as they had 10 shots on target compared to 0 from the Turkish side.

And finally we backed Juventus Double Chance at Bayer Leverkusen, not only did Juve not lose, but they came out on top 2-0 winners in this one. Cristiano Ronaldo opened the scoring in the 75th minute and with the home team opening up in search for a equalizer towards the end of the game, Gonzalo Higuain capped the night off with another goal to make it 2-0 Juventus and more importantly land our 18/1 Accumulator!!

Be sure to bookmark our FREE FOOTBALL TIPS page so you don’t miss out on any future winners!

Our followers on twitter were kind enough to send in their betslips and here are some of them:

Thank you again mate. I have been winning your accas. pic.twitter.com/Y2UvA1gDcB