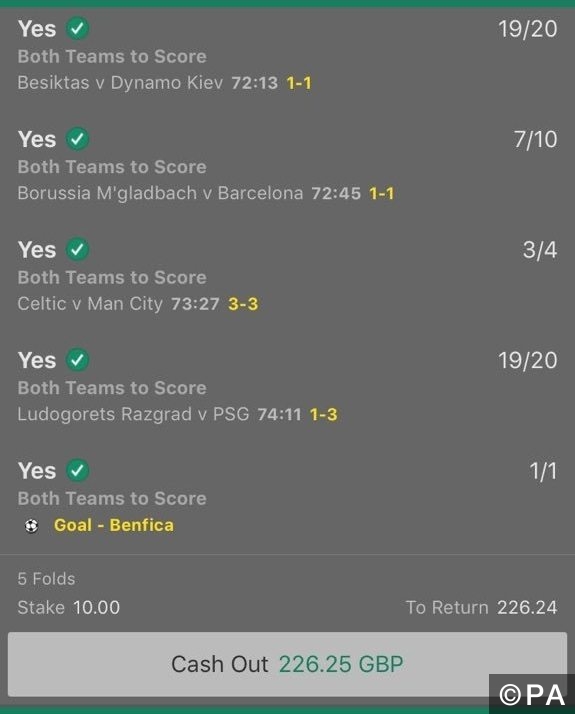 If you thought Tuesday was a big night for our football tipsters then Wednesday was certainly on another level.

30/1 and 8/1 half time accumulators won for the second night in a row and we put the icing on the cake with an 18/1 both teams to score accumulator win.

Who was on? Keep those betslips rolling in.

An action packed first-half at Celtic Park saw the first leg land in just 11 minutes. Dembele put Celtic ahead after just 3 minutes and Fernandinho got one back for Pep’s men on the 11 minute mark.

Lugogrets went 1-0 up against PSG thanks to a free kick on the quarter hour mark and the first-half goals kept flying in as Hamsik scored for Napoli, Hazard scored for Gladbach and Matuidi crossed off another leg in our acca as he equalised for PSG 4 minutes before half-time. 2 legs won, 3 to go.

That meant, going in to the second-half, we just needed 3 away teams to score; Dynamo Kyiv, Benfica and most surprisingly, Barcelona. Things got even more exciting after 20 minutes of the second-half as both Kyiv and Barcelona scored on 65 minutes.

By this time, Benfica were already 4-0 down but to their prevail, they struck back on 70 minutes with a goal from Goncalo Guedes. 5 legs won (with plenty to spare!) and £188 in the bank!

Both Teams To Score Tips

This was our third both teams to score accumulator win of September after back-to-back wins earlier in the month, taking our total profit on BTTS accas this month to £329!

Make sure you bookmark our both teams to score tips page for daily free tips to help you pick out a BTTS winner!

After Tuesday’s big night, it was no surprise to see so many of our followers on Wednesday’s BTTS acca win.

What’s even better is that many were sending in screenshots including 3 acca wins from the same night for a complete bookie bashing! What a night!

@FootySuperTips I’ve slowly started to fall in love with you pic.twitter.com/OZgKUJVWuE

@FootySuperTips I’ve cashed em all out wasn’t losing out on too much, thank very much #toptipping pic.twitter.com/b5aYkoSOl1