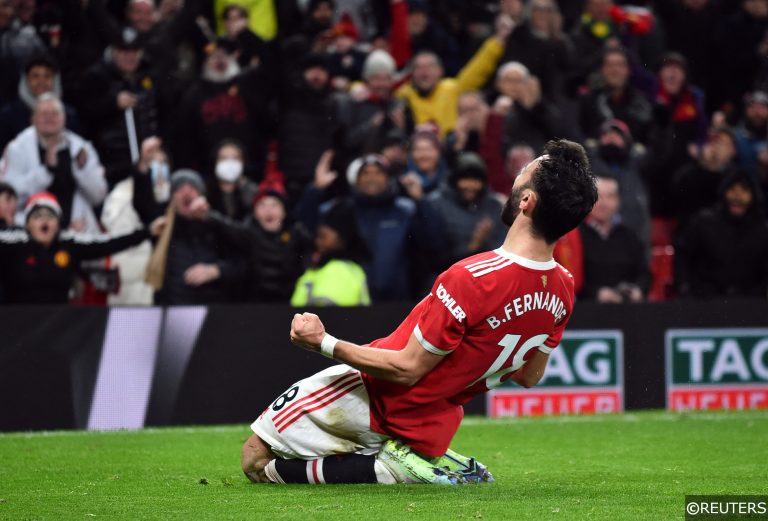 It may not be a title battle any longer, but the Manchester derby remains a massive clash and it’s the pick of Sunday’s football. While City are on course for another title, United’s record here suggests the Citizens could be up against it.

As the build up continues to Sunday’s big game, we’ve picked out a massive bet builder for the clash. We’ve got five selections in our same-game multi, which clocks in at over 200/1! See our massive Super Sunday tip below.

The Red Devils have fallen some way behind their city rivals in recent years, but that hasn’t been clear in their head-to-head meetings. Pep Guardiola has only once completed a league double over United since arriving in 2016.

Man United have won four of their last five visits to the Etihad and they’ve inflicted more home defeats upon Pep Guardiola than any other side.

On top of that, United come into this clash unbeaten in eight Premier League games, while Man City lost their last home game to Tottenham. Following that, back the visitors to avoid defeat.

While United have an impressive Etihad record, so does Kevin De Bruyne. The Belgian has only made seven starts at home in the Premier League this term, but he’s still scored six times in front of City’s home support.

De Bruyne has boosted that tally of late, as he has scored five times across his last five appearances at the Etihad in the league. Go with him to get another goal.

Bruno Fernandes to make an assist & be carded

Fernandes has 12 assists for United this term, while he’s been involved in four goals across his last four games for the Red Devils.

The Portuguese has been his most dangerous on the road, with nine of his 12 assists coming away from home this term. Unfortunately, he’s also been booked five times across his 13 Premier League trips, so back Fernandes to set up a goal and see a card in this one.

When City are involved, games tend to feature a lot of corners. Their Premier League matches this season have seen 11.48 corners per game, marginally higher than the 11.23 that United are seeing per away trip.

City have averaged over nine corners per home match, which means we’re likely to see plenty of corners on Sunday. With United registering over five per league match themselves, back these two to rack up at least 11.

Win tickets and accommodation for Manchester United vs Chelsea