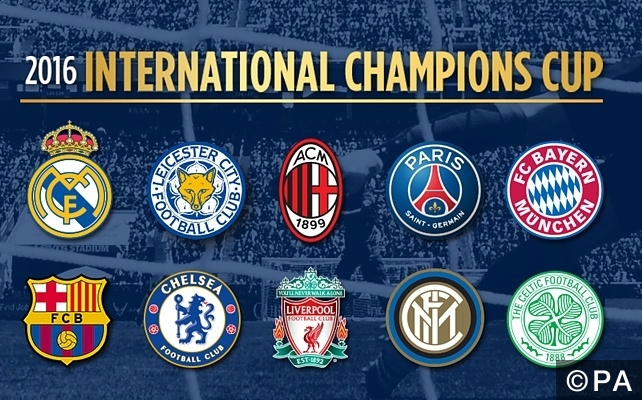 The International Champions Cup is an annual competition, predominantly made up of European teams with matches played out across the United States and Europe. Since 2015 they have expanded the competition, now also holding matches in Australia and China.

In 2014 we saw a new record for the highest attendance at a football game (or should i say soccer) in the United States. A huge 109,318 spectators turned up to witness the clash of European heavyweights Manchester United and Real Madrid. This really should be unsurprising since both clubs are revered and followed the world over. Take their twitter accounts for instance, Manchester United are closing on 8 million followers with Real Madrid currently having 19.8 million followers!

This year we will see a brand new entrant in Premier League Champions Leicester City. The continue their meteoric rise in the football world as the three teams they will face in the “Group stages” are Celtic, Paris Saint Germain (PSG) and Barcelona. Who would have thought this time last year Leicester City, written off as anything but relegation candidates, would be playing against Barcelona! An absolutely incredible rise for the Midlands based club.

Their announced fixtures are:

One thing is for sure, with the quality of teams entering this years edition of the International Champions Cup, fans are sure to be entertained with some exciting games of football, packed full of goals, goals and more goals!

Which match are you looking forward to most? Or maybe you’re heading off to watch a game? Let us know over on our Twitter Page, we’d love to hear from you!