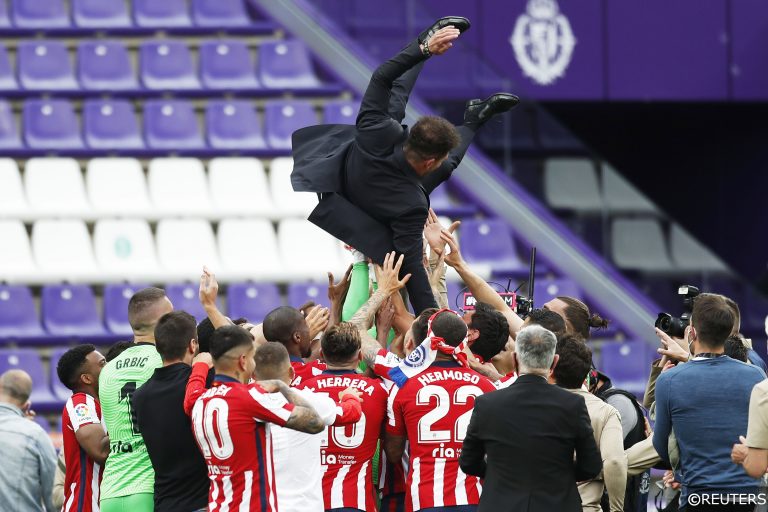 The 2021/22 Spanish La Liga season kicks off this weekend and we’ve got everything covered for you here at FST.

Check out our betting overview for the Matchday 1 fixtures in Spain below, or visit our dedicated Spanish La Liga section which includes in depth betting previews for the weekend’s feature games plus our Spanish La Liga outright tips.

Two sides looking to put disappointing seasons behind them get the 2021/22 La Liga campaign underway at Mestalla this Friday, as new Valencia boss Pepe Bordalas takes charge of Los Che for the first time against previous club Getafe.

With a raucous crowd back behind Los Che and a new manager bringing hope, we think Valencia can grind out a positive opening day result here against the Madrilenians, who lost 11 of their 19 away trips last season, winning just three.

Despite their dismal 2020/21, Valencia only lost four of their 19 starts at Mestalla, winning eight, and they’re also unbeaten in their last four meetings against Los Azulones at this venue.

Cadiz and Levante shared the points in a pair of action packed 2-2 draws last season and we expect both sides to hit the net when they square off here in Andalusia.

With Cadiz managing just five home wins in 2020/21 (D5, L9) and Levante claiming just four victories on the road (D5, L10), things could well end level between the teams again this weekend and there was also just three points separating them in the final standings last term.

The 1X2 market looks best avoided though in favour of backing both teams to score, which in addition to last season’s meetings, registered in five of Cadiz’ final six games last term and in four of Levante’s last five starts.

Mallorca make their return to La Liga on Saturday evening and the Balearic Islanders could well grind out a point against Real Betis at Son Moix.

Betis lost just one of their final 16 games (W8, D7) last season to secure sixth place and UEFA Europa League Qualification, though they generally struggled for victories on the road throughout the campaign and won just one of their last six away trips, drawing four.

With Mallorca’s promotion largely sealed thanks to a run of eight wins and a draw from their last nine outings at Son Moix, Luis Garcia’s men have to be taken seriously on their own turf and a point apiece here feels like the most likely result.

Best bet – Real Madrid win and both teams to score – ⭐⭐

Carlo Ancelotti oversees his first competitive game back in charge of Real Madrid as the new La Liga campaigns gets underway this weekend, and Los Blancos are tipped to see off Alaves in an entertaining encounter at Mendizorroza.

Real won 12 and lost just one of their 19 away trips last season, though they did concede in five of their last eight, while Alaves hit the net in each of their final six home games.

Los Blancos have won and conceded on their last two visits to this venue and a similar outcome looks on the cards here. Real should again have too much quality for the Basque outfit, though it may take Ancelotti’s side a few weeks to acclimatise defensively following the departures of Sergio Ramos and Raphael Varane during the summer.

Espanyol were far from convincing on the road last term en route to the Segunda title and Vicente Moreno’s side look set for a tough top flight opener against Osasuna this Saturday.

Periquitos won just nine of their 21 away trips (D7, L5) against opposition far inferior to what they’ll face this season, and they take on an Osasuna outfit here who won three of their final four home starts at El Sadar in 2020/21 to help seal a respectable 11th place finish.

Osasuna have also won the last three meetings including a 0-2 away success in last season’s Copa Del Rey, so we’re backing the hosts to triumph this weekend, albeit via a narrow margin, as Jagoba Arrasate’s charges averaged just under a goal per game last term.

Celta Vigo were prolific scorers at Balaidos last season and Eduardo Coudet’s charges can be competitive in an open game this Sunday against reigning champions Atletico Madrid.

Atleti ran out convincing 0-2 winners in last season’s corresponding fixture, but that was just one of four occasions where Celta failed to net on their own turf and they scored in each of their last six La Liga starts at Balaidos, bagging 11 goals in that spell.

Celestes also struck in their final seven matches overall in 2020/21, while the teams played out an entertaining 2-2 draw in their last meeting at Wanda Metropolitano in February.

All in all, everything points towards  a cracking contest in Galicia, and both teams to score makes greater appeal than backing Atleti at a shade of odds-on considering Diego Simeone’s side won just two of their final seven away trips last season.

It speaks volumes that despite not losing to Sociedad here in 27 encounters and winning ten of the last 11 meetings between the teams including a barnstorming 1-6 success at Anoeta in March, Barca are priced up at a tempting 8/11 for this Matchday 1 contest.

But the bookmakers are clearly uncertain around the short term impact that Lionel Messi’s departure from the Catalan giants will have, alongside several other personnel changes and the club’s well publicised ongoing financial troubles.

Real Sociedad are always a great watch and managed to score in all but one of their final 11 La Liga fixtures last season. With both teams scoring in six of the last seven meetings and Barca conceding in seven of their last nine league outings in 2020/21, both teams to score looks a solid alternative play for Sunday’s clash at Camp Nou.

Sevilla won eight of their last 11 home matches last season without conceding a goal and that’s just how we expect this Sunday’s action to pan out when Los Palanganas entertain newly promoted Rayo Vallecano at Ramon Sanchez Pizjuan.

This is a mightily difficult opening assignment for the visitors who return to La Liga after a two year absence, and they had to force their way through a Play-off against Girona last term to reach the top flight.

Los Franjirrojos won just eight of their away trips during the regular season (D7, L6) en route to a sixth place finish, so it’s difficult to envisage them getting anything in Andalusia against a Sevilla side whose 14 home victories in 2020/21 went a long way towards securing their fourth place finish and UEFA Champions League football for the campaign ahead.

These sides’ last four meetings in La Liga have produced a huge 16 goals and we’re forecasting another entertaining affair when they face off at Estadio de la Ceramica on Monday evening.

Granada won just four and lost 12 of their 19 away trips last term, however, Villarreal look too short in the betting for this clash after managing only eight home wins in 2020/21 (D7, L6). Unai Emery’s charges also had to play 120 minutes in midweek on the way to a UEFA Super Cup penalties loss against Chelsea, so our focus is firmly on the goal markets here.

The visitors posted the worst defensive record in La Liga last term despite finishing ninth and their last 11 away trips all produced three goals or more. With the same applying to all but one of Villarreal’s final six home league outings, over 2.5 looks the clear way to go for this opening fixture at la Ceramica.

These sides met on the final day here last season when Elche posted a 2-0 win to ensure their La Liga survival and it’s difficult to see why the bookmakers have chalked up Fran Escriba’s charges as near 3/1 underdogs for this clash.

Despite finishing 17th, Elche lost just six of their 19 home starts last term (W5, D8) and they were generally very competitive on their own turf throughout the campaign.

Athletic Bilbao’s aforementioned defeat at this venue in May was one of nine which Los Leones suffered on their travels last term, with a meagre three wins mustered in total from their 19 away trips. As a result, it’s the hosts who warrant support in the double chance market as Matchday 1 draws to a close in Valencia.