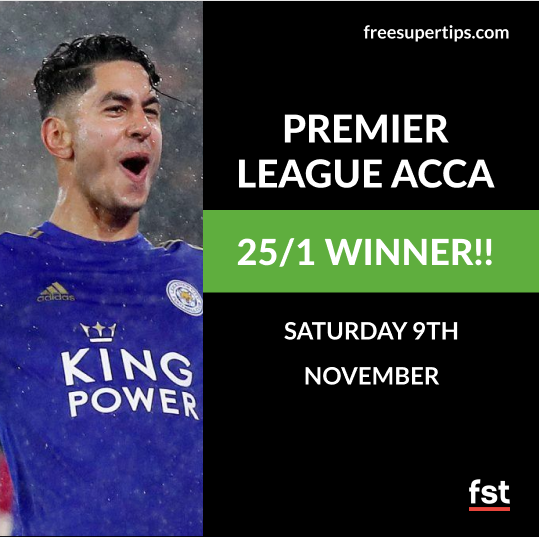 It’s been yet another great weekend for FST! Last weekend we landed an 11/1 Evening Accumulator as well as a 7/1 Overnight Accumulator, and this week our football analysts have come up trumps again landing a 25/1 Premier League Accumulator!

The 25/1 Premier League Accumulator, kindly boosted for us by Paddy Power, consisted of 4 games all from the Premier League. We needed Burnley to beat West Ham, Newcastle to beat Bournemouth, Both Teams to score in Tottenham vs Sheffield United and Leicester to beat Arsenal.

Burnley got us off to the perfect start, when Ashley Barnes netted from a corner that was flicked on by James Tarkowski. His strike partner Chris Wood made it 2-0 to the home side when Dwight McNeil capitalised on a defensive error from Balbuena just before the break, and Burnley went in at half time 2-0 up. Over on Tyneside, Newcastle got off to the worst possible start as Harry Wilson gave the Cherries the lead on 14 minutes. Newcastle levelled up the scoring just before half time when DeAndre Yedlin found the back of the net, going into the break at 1-1. Over in London, it was a very quiet first half, as both sides went into the break goalless.

It was a lively start to the second half in all three games, started off by Ciaran Clark in the 52nd minute, as he found the net, assisted by Federico Fernandez, giving the hosts a 2-1 lead. Just 2 minutes later, another comical error from West Ham saw Burnley go 3-0 up as Roberto Jimenez punched the ball into his own net from a corner. Four minutes later and finally a goal was scored over at the Tottenham Hotspur stadium, as Son Heung Min gave the home side the lead. Sheffield United should have equalised shortly later, but for an absolutely ridiculous VAR that ruled John Lundstram’s toe nail offside in the buildup to the goal. Fortunately the Blades eventually got their goal through George Baldock, and the game ended 1-1. There were no further goals in Burnley or Newcastle’s games, so they ended 3-0 and 2-1 respectively.

Finally, we just needed high-flying Leicester to beat Arsenal to land the 25/1 accumulator. The game got off to a slow start, as neither side found the breakthrough in the first half, although Aubameyand did find the net, only for it to be ruled offside. It took until the 68th minute, but finally the deadlock was broken, by none other than Jamie Vardy. His scintillating form continued, as he assisted James Maddison who fired in from long range to make it 2-0 just 7 minutes later. There were no further goals in the game, landing us the 25/1 Premier League Accumulator!

Have a feeling a draw or away win so cashed out, still lovely profit cheers pic.twitter.com/7pCM5XhAcH