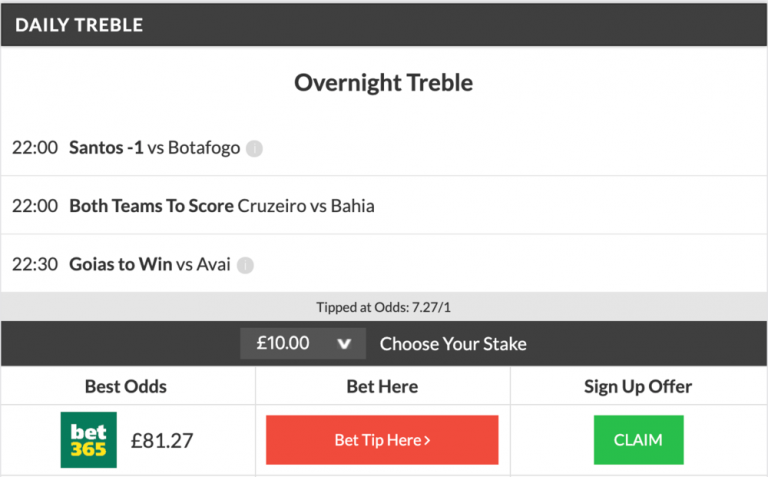 Another productive weekend here at FST!

After we successfully landed a 11/1 Accumulator on Saturday night, we capped things off with yet another Football winner!

This time we landed a 7/1 Overnight Treble in Brazil and here’s how it unfolded:

How was your weekend? 😃 pic.twitter.com/GOi5aeRHDb

First up we needed Both Teams to Score in the Cruzeiro vs Bahia clash. After a scoreless first half, it was the visitors who broke the deadlock after Fernandao converted a penalty in the 66th minute. Prior to that the home team went down a man in 64th minute as Orejuela was booked for the 2nd time.

That didn’t stop Cruzeiro from finding an equalizer. They continued attacking and were rewarded in the 74th minute when Sassa found the net after an assist by Thiago Neves. First tip of the treble was in!

In the 2nd game we needed Santos to win by more than 1 goal against Botafogo at home. They went off to a flying start and were up 2:0 after 13 mins. The visitors pulled one back in the 34th, but they couldn’t stop Santos who scored two quick goals in the 2nd half to win by 4:1 here, which meant we were down to one final leg on the treble.

In that final leg we needed Goias to beat Avai at home and what a close game that was. No goals were scored in 90 mins and then Goias broke the deadlock on a penalty in the 1st minute of added time. The visitors went all out after that and were punished on the counter with another goal and we could start celebrating our Overnight Treble winner!!