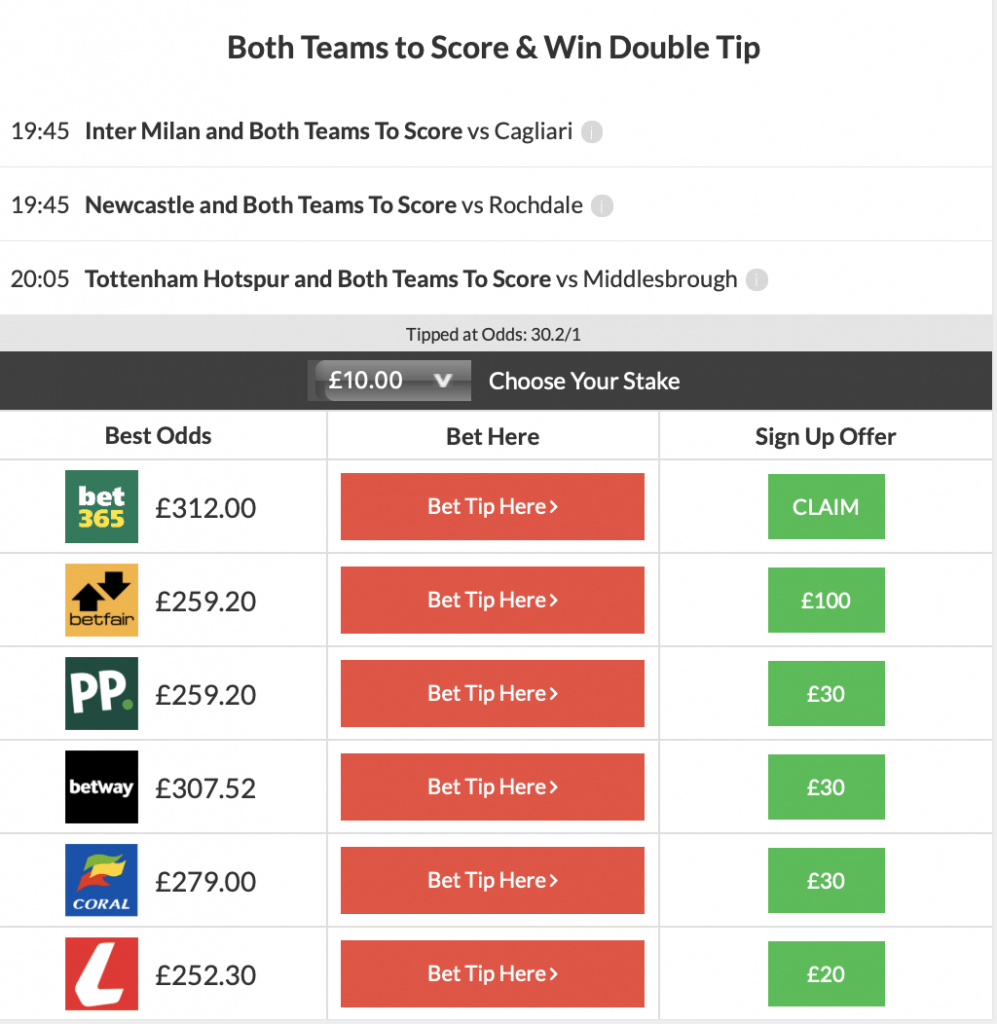 The winners just keep on flying in here at FST! Just 24 hours after landing our 15/1 Accumulator, our football tipsters have delivered two more winners!

We landed our 30/1 BTTS & Win Treble plus our 8/1 FA Cup boosted Accumulator!

All three legs of our Treble finished in a similar manner.

It was the home teams dominating in all three matches.

Tottenham were up 2-0 against Boro at home after just 15 minutes. The visitors pushed for a consolation goal in the 2nd half and the breakthrough came in the 83rd minute when they pulled one back but that was all she wrote.

Newcastle dominated Rochdale at home. 3-0 was the scoreline after 26 minutes and the tie was pretty much decided. Newcastle scored a 4th one in the 2nd half as well, but luckily for us Rochdale did not give up and managed to score one back in the 86th minute for a final score of 4-1.

And finally, Inter Milan were up 3-0 on Cagliari after 49 minutes. The visitors managed to convert on one of their three shots on target in the 73rd minute and that was the goal that landed our Treble!

What a way to finish the night!

It was a fairly evenly matched game between Lincoln and Bolton. Up until the 84th minute it was 2-1 to the home team, but then Lincoln just switched a gear up and scored three goals in the final 5 minutes for a convincing 5-1 win.

Coventry were lethal in front of goal against Bristol Rovers as they scored on 50% of their shots on target. They took the early lead in the 4th minute and then scored twice in the 50th and 56th minute for a 3-0 victory.

Rochdale were no match for Newcastle as the Premier League side came out on top 4-1 here. Longstaff, Almiron and Joelinton were all on target for the Magpies who move on.

It was a tight affair between Shrewsbury and Bristol City. The score was locked at 0-0 as we approached full time, but then the home team broke the deadlock with a goal from defender Aaron Pierre. The home team managed to hold on and that was our 2nd Accumulator winner of the night!

Be sure to bookmark our Free Football Tips page for more winning accumulators!