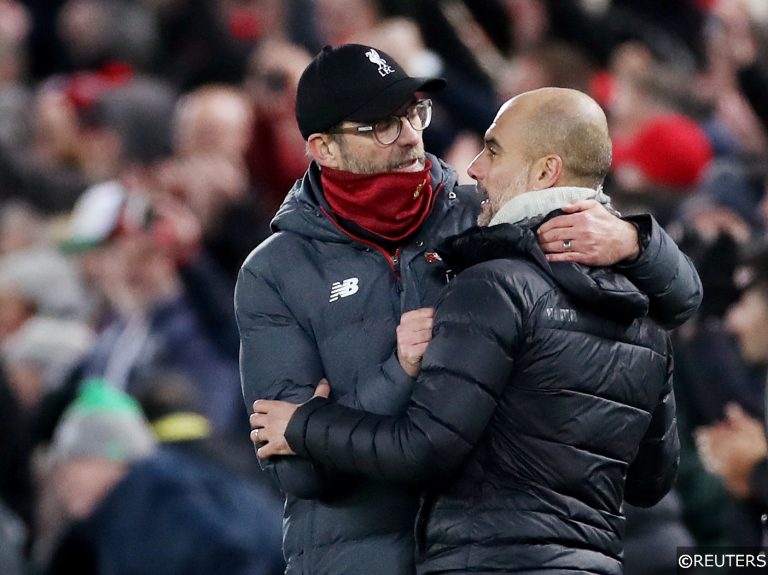 Manchester City host Liverpool at the Etihad on Thursday evening in what promises to be a high-octane clash between the Premier League’s two best teams.

Having just ended their despairingly long 30-year wait for a title, it feels fitting that Liverpool will play their first game as the newly crowned champions at the home of the team they deposed with such ease this term.

The Citizens, however, will be determined to spoil the Merseysiders title tour this week, and Pep Guardiola’s men have plenty of pride to restore on Thursday.

With the chance to break numerous Premier League records still open to Liverpool, Jurgen Klopp’s relentless Reds also have incentives to win, and that should ensure that we see a full complement of stars on show in Manchester.

Ahead of the action, we’ve delved deep into the statistics and odds to come up with a tasty looking 33/1 bet365 Bet Builder for Thursday’s heavyweight bout.

If you’re on the look out for a more detailed analysis of the game, we recommend checking out our Manchester City vs Liverpool predictions.

Over 2 goals in the match for both teams combined

Under 4 cards in the march for both teams combined

Rodrigo to get booked

By adding these selections to your own Bet Builder using the banner below, you come away with a massive 33/1 bet to sink your teeth into on Wednesday evening. Just click below and add the corresponding selections (or some of your own) to your very own bet365 Bet Builder.