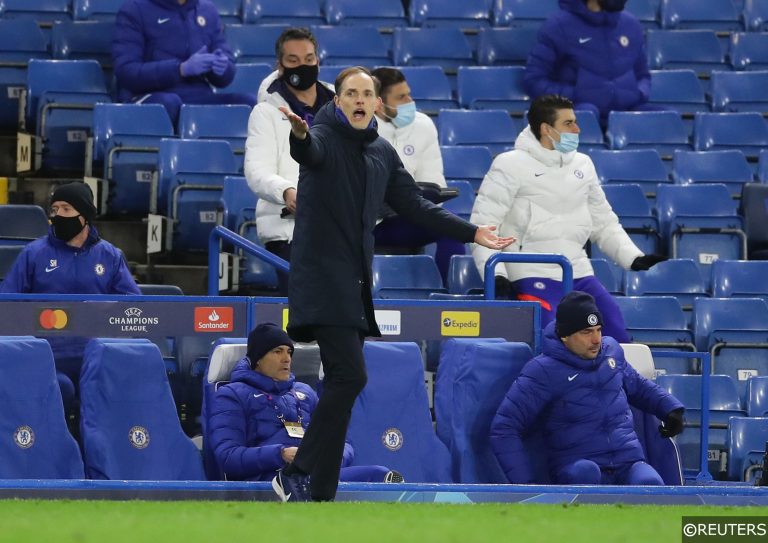 Chelsea take a commanding 2-0 first-leg lead in to the second half of their Champions League quarter-final tie with FC Porto in Seville on Tuesday evening, where the Blues are favourites to press home their advantage.

Goals from Mason Mount and Ben Chilwell either side of the interval last week allowed Chelsea to take control of the double-header, and with one foot already in the semi-finals, Thomas Tuchel’s men are expected to complete the job in London.

Ahead of Tuesday’s climactic fixture, we’ve picked out some predictions and tips for punters looking to construct multi-part and bet builder selections for Chelsea’s clash with FC Porto.

Check them out below – and remember – you can read our detailed preview of the game in our Chelsea vs FC Porto predictions.

Chelsea followed up their superb 2-0 triumph in Spain with arguably their best performance under Tuchel, from an attacking perspective at least, against Crystal Palace at the weekend, when they thumped the Eagles 4-1 at Selhurst Park.

Those back-to-back wins will have allowed Chelsea to fully recover from their 5-2 aberration against WBA the week before, and we expect the Blues’ superior class to be evident when they take on Porto in Seville.

Chelsea’s impressive shutout in the first-leg was their 13th clean sheet in 17 games since Thomas Tuchel swapped Paris for London, and the watertight Blues can keep Porto at arm’s length again when the teams reconvene on Tuesday.

Remarkably, Chelsea have kept their visitors off the scoresheet in seven of their last eight home assignments, while Porto have drawn a blank on four of their last away games against English teams in the Champions League.

Bet builder tip: Both teams to score – no

While Chelsea’s improvement in defence since Thomas Tuchel’s appointment has been stark, the Blues haven’t quite clicked into gear in more advanced areas.

Chelsea’s 4-1 win at Palace on Saturday was the first time they notched more than two goals in a single game since the German’s arrival in January, and it’s worth noting that 15 of their last 17 fixtures produced under 2.5 goals.

At Stamford Bridge, Chelsea haven’t been unable to register more than twice in any game with Tuchel calling the shots, so don’t expect them to blow Porto away on Tuesday evening.

Home grown midfielder Mason Mount is fast becoming Chelsea’s talisman, and the England international, who has scored twice in his last three appearances for the Blues, tends to save some of his best work for his team’s biggest games.

Mount broke the deadlock against Porto in last week’s first-leg, while his match-winner at Liverpool at March showed again how he can be relied on to provide telling contributions in crucial contests.

Mason Mount needed just one shot to make his mark against Porto last week, though we expect the Portsmouth-born schemer to be more heavily involved in the second-leg in Seville on Tuesday.

The 22-year-old mustered a healthy nine attempts in his last two league fixtures combined, and Mount tested Vicente Guatita with two on target strikes on Sunday and those numbers suggest the influential midfielder is worth sticking with in this week’s shot markets

Manchester City and the quadruple: What are their chances?