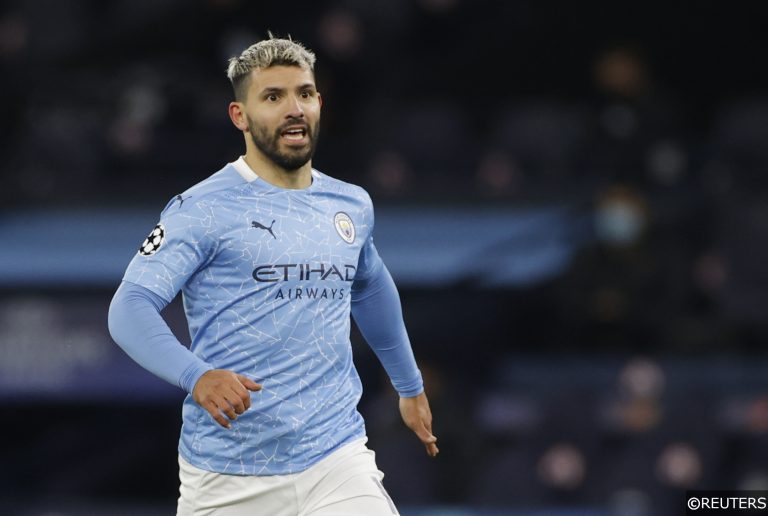 The decade-long Sergio Aguero era will end at Manchester City this summer when the iconic Argentinean striker seeks out pastures new following ten years of unprecedented success with the Citizens.

Aguero will be immortalised forever in City folklore for the title winning goal that spawned a thousand vowels in 2012, while his overall haul for the club – which climbed past 250 goals last season – means he will leave the Citizens as all-time leading scorer by some distance.

The 32-year-old will be one of the most decorated players to have played in England by the time he leaves Manchester in the summer, but where does Sergio Aguero rank in the list of the all-time greatest Premier League strikers?

Check out our list of the division’s top ten attackers below to find out where we have placed Aguero. Remember to share your opinion with us on FST’s official Twitter account if you disagree!

It’s hard to imagine it now, but Jamie Vardy struggled to make an impact during his first season in the Premier League when he turned out for promoted Leicester City in 2014/15, scoring just five times during an uninspiring maiden campaign in England’s top-tier. However, the old-school number nine found his feet quickly after that.

Vardy has plundered at least 18 goals in four of his five league campaigns since, and the battle-hardened striker is on course to break the 20-league goal barrier for the fourth time this term.

The 34-year-old’s consistency was rewarded with a Golden Boot last season, though he will always be best remembered for his exploits with Leicester City during the Foxes’ fairy-tale run to the title in 2015/16.

Often overlooked and criminally underrated, Andy Cole is the Premier League’s third highest scorer of all time, netting 187 goals for seven clubs during his lengthy career at the top level.

Best known for his silverware filled stint with Manchester United, Cole was the most expensive player in England when he left Newcastle to move to Old Trafford, where the ex-Arsenal youngster blossomed into one of Europe’s most feared forwards.

Didier Drogba will always been synonymous with Chelsea’s transformation from also rans into expensively assembled serial winners, and the powerful and skillful Ivorian scored an impressive 104 goals in 226 Premier League appearances for the Blues between 2004 and 2012.

Alongside his excellent overall total, Drogba’s penchant for producing key moments in the biggest games added to his legendary status at Stamford Bridge, and the centre-forward won four Premier League titles and two Golden Boots during his stay in London.

Drogba – who was named African Football of the Year Twice – was even named GQ’s Sportsman of the Year for 2012.

For five seasons between 2001 and 2006, Ruud van Nistelrooy was a Premier League goal machine, and the prolific Dutchman punched through the 20-goal ceiling in the division in four of his campaigns in red.

Van Nistelrooy hit the back of the net once every 128.8 minutes during his goal-laden stint at Old Trafford, putting him 5th in the Premier League’s all-time records for that metric.

Robin van Persie’s highlight reel is as good as anyone’s, though the flying Dutchman combined his eye for the spectacular with consistent goal-scoring numbers.

The ex-Gunners and Man Utd hitman ranks 13th on the Premier League’s roster of all-time top scorers with 144 goals, though van Persie is a much higher 7th in the minutes to goals standings.

The former Netherlands international won the Golden Boot twice during his career, and van Persie fired Manchester United to their 20th league title in 2012/13 with 26 goals during his debut campaign with the club.

Harry Kane has been either first or second in the Premier League’s goal scoring charts in four of the last six campaigns, and the Tottenham Hotspur talisman is on course to smash through the 20-league goal ceiling for the fifth time in seven seasons in 2020/21.

Only Sergio Aguero has a more impressive minutes to goals ratio than Kane, who hits the net approximately once every 128 minutes for Spurs, while the recent swelling in his assist numbers have added to his overall threat.

Kane needs another hundred goals to catch Alan Shearer in the all-time scorer stakes, but at 27, he has plenty of time on his hands, and the Spurs’ academy graduate could easily top these lists in a few years with the right kind of luck.

Controversial entry time. Now before you spit feathers on social media about our decision to put the Premier League’s all-time leading scorer, Alan Shearer, down in fourth spot, at least hear us out first.

Master of the net-shredding rocket and single arm celebratory salute, Shearer was the poster boy of Premier League football after the division’s rebrand in the early 90’s, and few players have matched his longevity since.

However, in his ten years with Newcastle, Shearer only surpassed 20 league goals four times, and overall, the Magpies’ favourite son averaged a relatively modest 14.8 league goals per season.

Shearer also ranks quite low (10th) in terms of his minutes to goals ratio, while his single Premier League title, won with Blackburn in 1995, means that many of his strikes didn’t carry the importance they might have in more successful silverware chasing teams.

When Wayne Rooney was in full flow, bristling with fury and at odds with the world, he was an unstoppable force of nature, unleashing Exocet missiles with both feet past terrified Premier League goalkeepers for over 15 years.

When he hung up his boots in 2021, he held the all-time goalscoring records for both Manchester United and England, while his 208 Premier League goal and 103 assists tallies placed him second and third on the list of all timers respectively.

Rooney won five league titles with United and though he never won a Golden Boot, however, a vast collection of other individual honours mean he was never underappreciated.

Three players have scored more Premier League goals in total than Sergio Aguero, though few players can match the impact the Argentinean made during his time in England’s top-flight.

Aguero’s minutes to goals ratio is unparalleled, and remarkably, the 32-year-old has scored once every 108 minutes since swapping Spain for the UK in 2011.

Somewhat surprisingly, Aguero has claimed just one Golden Boot during his time with City, though his four and soon to be five Premier League titles more than make up for that individual award shortfall.

In the Premier League, Henry’s 175 goals put him sixth on the list of the division’s most prolific marksmen, though only City’s Aguero and Tottenham’s Harry Kane have better goals to games ratios than “Titi”.

Henry notched at least 20 league goals for the Gunners for five straight campaigns between 2001 and 2006, and the Paris-born superstar should always been one of the first names on the team-sheet when any all-time Premier League XI’s are discussed.