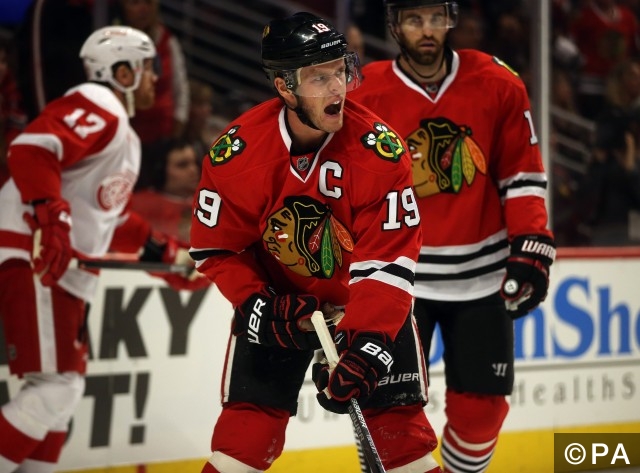 LIKE if you were ON & send your winning betslips!

Let’s start with the big win, a seven fold of teams to win on Saturday night gave us a huge 38/1 winner. Washington Capitals picked up a 2-1 win over the New York Islanders to kick things off and land the first part of our daily double. The Wild beat Winnipeg 4-3 to land the second half of the daily double and get things off to a good start. The next three teams all by a one goal advantage, St Louis 3-2 over the Rangers, Tampa Bay 3-2 over New Jersey and San Jose 3-2 over Colombus. Chicago won 5-3 thanks to a hat trick from Richard Panik which included the goal below. The BOOM was capped off with a 4-3 overtime goal from the Arizona Coyotes.

We also landed our regular accumulator at 15/2 and received a parlay bonus from bet365 to make it around 10/1!

Our regular accumulator was a four fold of teams to win – Minnesota Wild, Washington Capitals, St Louis Blues and Arizona Coyotes. It took an overtime power play goal from the Coyotes’s Oliver Ekman-Larsson to win a nail biter against the Philadelphia Flyers.

To top it off we landed our daily double which was Washington Capitals and Minnesota Wild money line for a cool £75 profit.

Let’s take a look at some of our followers bet slips sent in via our Twitter account.

@FootySuperTips Nice wake up boom. Been put on sick leave for 4wks this week. So nice to have extra cash. Thx guys pic.twitter.com/KnXlZbt5ln

@FootySuperTips over night boom! Cheers then made my upcoming week off even better #icehockey pic.twitter.com/mi0V3JF1cj

It all started off lastnight with a fiver and now rocking £400+ profit Late goals on In-plays nice @FootySuperTips (NHL)!! pic.twitter.com/7agbxil39S

@FootySuperTips waking up to £520 this morning thanks to your hard work!!! Amazing lads, thanks a lot pic.twitter.com/ZFfVYVaMnH

@FootySuperTips went with just a fold, but higher stake thanks for the tips pic.twitter.com/WfBvlSgzb4

@FootySuperTips nice to wake up to on a Sunday. Cheers boys. BOOOM!!! pic.twitter.com/ulxJsfOq49

@FootySuperTips legend for the NHL bets. Was on all of them! pic.twitter.com/zMpCS7ImA1

@FootySuperTips big booms last nite. Thanks for the tips. pic.twitter.com/zM3LCfhs0F

That’s not even all of them but you get the idea, lots of followers won big!