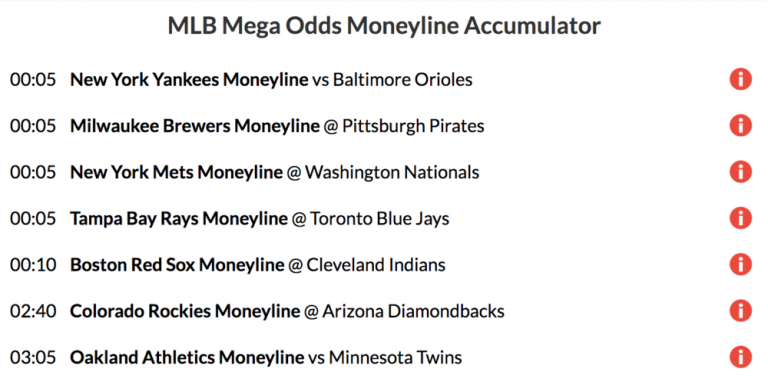 The month of September just keeps on giving here at FST!

Our MLB Analyst has yet again landed another Accumulator, this time a 45/1 Mega Odds bet which came in last night!

The night started off in New York where the Yankees hosted the Baltimore Oreoles. NY got off to a really good start and led 6:0 after four innings, which proved to be really tough to come back from for Baltimore. The Yankees scored 3 more runs in the 7th to put the game away and it finished 10-8 to the home team.

A decisive 6th inning landed our 2nd tip of the Acca. The Milwaukee Brewers scored 6 without a reply against the Pirates and ran out 8-3 winners.

A low scoring game between the Mets and Nationals was the 3rd game of the Acca. Luckily for us though the Mets went up 4-1 after 3 innings and Washington couldn’t mount a comeback in this one.

Tampa Bay dominated their division rivals Toronto Blue Jays 11-3 in the 4th game. The game was pretty much over in the 6th and 7th inning where the Rays went on a 7-0 run to close out Toronto.

The Boston Red Sox were down 3-1 to the Cleveland Indians in the next game. However, they were able to mount a comeback in the 7th inning which they won 4-1. They put the game to rest with another run scored in the 8th and it finished 7-5 Boston.

Similarly to the Red Sox, the Colorado Rockies were down for the majority of the game against the Arizona Diamondbacks. However, they scored 4 runs in the 8th inning to turn the game around completely and the hosts never recovered which meant we were down to one last game on the Acca.

In that final game the Oakland Athletics went up 4:0 against the Minnesota Twins and almost bottled the game. Minnesota won the 6th inning 6-2 which meant the score was tied at 6-6 with the momentum being on their side. The game went into extra innings and luckily for us it was the Athletics who scored first which brought us another winner!!!

We’re getting close to the end of the regular season in the MLB and we have some big things coming for the Playoffs. Do yourself a favour and bookmark our Free Baseball Predictions page of the FST website.

Our followers were once again buzzing early in the morning over on twitter and were kind enough to share some of their winning betslips with us:

Takes the edge off getting up for work on a Saturday. Cheers fellas pic.twitter.com/NMpAX2V9mv

Thanks FST I combined the 2 bets and won this pic.twitter.com/UO6azVFptB