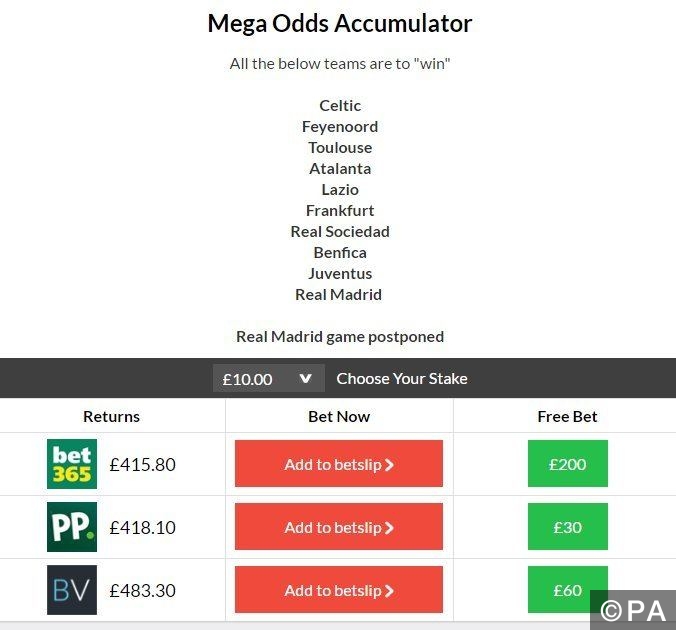 What a start to February for us at FST!

After landing a 19/1 Darts Accumulator and 11/1 Tip on Golf earlier in the week, our tipsters have carried over their fine form into footy as well!

It was indeed a “Super Sunday” for us as they managed to land a 7/1 BTTS & Win double early in the day and followed it up with a 47/1 Mega Odds Accumulator winner later on!

The Acca was spread over a couple of leagues as it consisted of 3 Serie A games + one game from France, Spain, Portugal, Holland, Germany and Scotland.

Despite being off to a shaky start in the first 45 mins of the first game, it was Celtic who managed to turn around a 2-1 deficit into a 5:2 win at St Johnstone to land our first game of the day. The Acca continued in Holland where league leaders Feyenoord took care of business at Twente with a 2:0 win. Both goals came in the last 15 minutes of the match. Next up it was Toulouse who welcomed relegation candidates Angers to their Municipal Stadium. After a goalles draw in the first half, TFC turned it on in the second half and eventually ran out with a comfortable 4:0 win.

With 3 legs in, we were off to Italy where 2 of our 3 games kicked off at 2 pm. Both Atalanta & Lazio were favorites in their games before kick off. Atalanta got off to a hot start and with two quick goals in the first 16 minutes broke down Cagliari, which turned out to be enough for them to record their 13th win of the season. Lazio, on the other hand, faced the worst team in the league Pescara and after blowing a 2:0 lead in the first half, they smashed 4 more past the worst defence in Serie A to jump up to 4th in the table.

Five games landed and up next it was high flying Eintracht Frankfurt who hosted Darmstadt at home. There was great value on a home win in this one as the bookies priced it at Evens odds and our tipsters couldn’t pass up on that! After a hard fought 70+ mins, the home team finally broke the deadlock and scored two goals in the last 15 minutes to remain 3rd in the Bundesliga standings. They are one of the most pleasant surprises of the season in Germany!

At the same time during the Frankfurt game, Real Sociedad were also in action at home vs Osasuna. Despite being only 7/20 to win here, Sociedad went down in the 25th minute and struggled to level the score. Fortunately for us, they were able to do so in the 62nd minute and followed it up with two more late goals to seal the victory. Osasuna pulled on back but Sociedad held on for the win, which meant we were on the final leg of the accumulator!

In that final leg, it was Italian champions Juventus who faced a tough task at home against a red hot Inter Milan side who came into the match winning 7 games in a row in the league. Derbies in Italy are never easy to predict, but the Old Lady didn’t disappoint! Juan Cuadrado gave them the lead with a stunning goal in the 45th minute and it turned out to be the winning goal as Juve held on for another important win in their quest for retaining the Serie A title!

It was all over and we could start celebrating our 47/1 Mega Odds Accumulator winner!

January has arrived and we are off to a fantastic start with two Footy accumulator winners on Sunday! You can check out today’s free football betting tips here including accumulators, both teams to score tips & bank builder tips

@FootySuperTips £467 on betvictor & this on bet365 thanks for the tips!! pic.twitter.com/Cr05ApjQmy

@FootySuperTips cheers boys !!!!! That was the most uncomfortable 2 hours ever pic.twitter.com/bZeJXi6DBQ

It was amazing seeing so many betslips sent in last night! You are also welcome to send in yours and join the fun over on Twitter. All you have to do is give us a follow!