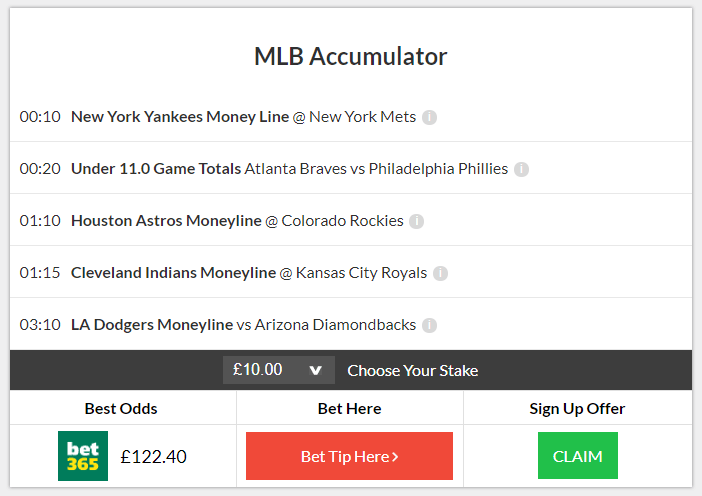 Exactly one week after our huge 47/1 MLB Mega Accumulator landed and two weeks after another 49/1 MLB Mega Acca winner, our baseball analyst has gone and done it again! … this time with a more modest winner.

Not a bad way to start the 4th of July! 🇺🇸⚾ pic.twitter.com/ox0MZh6tut

Our accumulator started in New York, as the travelling Yankees made the short journey to the Mets. We went for the visitors in this one as they rank 3rd overall for runs scored, 14 places higher than their NY neighbours. And the Yankees didn’t let us down. After going 2-1 up early on, they didn’t look back with Domingo German pitching six sharp innings on his return from injury.

Next up we were looking at runs in the Phillies @ Braves game. We thought this would be low scoring, so went for the under 11 game totals line, meaning we needed the match to have 10 or fewer runs (11 runs would be a push/void leg). After five innings, it stood at 3-0 and we thought this was flying in, but an eventful sixth inning pushed this one to the brink. With 11 runs total, the leg was voided and the acca reduced from 11/1 to 5/1 odds.

For our third and fourth legs, we needed the Houston Astros and Cleveland Indians to win. Both pitchers from these teams were on their game, with Wade Miley leading the Astros to a 4-2 win over the Colorado Rockies – all four of their runs coming early one – while Mike Clevinger pitched six innings of a four-hit ball for an even more comfortable 4-0 scoreline.

Finally, our attention turned to the last and latest game of the night. We’d backed the LA Dodgers to win at home to the Arizona Diamondbacks. This was a much more uncomfortable affair with the LA Dodgers seeing their early 3-0 lead ground down by the visitors over the course of seven innings. A run each in the ninth meant we were going into extra innings. Step up all-star Cody Bellinger who hit a tiebreaking homer to give the Dodgers a 5-4 win and fifth consecutive walk-off victory at home!

Did this twice happy days pic.twitter.com/SeiIeIZ8HR

Booom you boys are on 🔥🔥 pic.twitter.com/MSZZWHynUN